WELLINGTON COUNTY – It was another weekend of good news on the COVID-19 front, as the case count continues to decrease across the county.

After reporting 435 active cases on May 10, Wellington-Dufferin-Guelph Public Health (WDGPH) is reporting 296 active cases as of May 17, with 87 of those newly reported over the weekend (May 14 to 16).

The number of people hospitalized has decreased since last week’s update, from 34 to 29 as of May 13, with 11 of those in intensive care at either Guelph General Hospital or Headwaters Health Care in Orangeville (Wellington County hospitals do not have ICUs).

As of May 11, WDGPH reports 81.7 per cent of all COVID-19 cases confirmed the region (seven-day moving average) are variants of concern.

An additional 189 individuals have screened positive for a variant of concern not yet identified.

Wellington County had 18 new cases over the weekend, bringing the total active cases to 58, down from 88 a week ago.

Public health is also reporting the county’s 37th COVID-related death. WDGPH spokesperson Danny Williamson confirmed a man in his 80s died with the virus on May 12.

Dufferin County had 31 new cases over the weekend and now has 97 active vases, down from 139 a week prior.

Guelph had 36 new cases over the weekend and now has 136 active cases, less than half its total of 318 from three weeks ago. 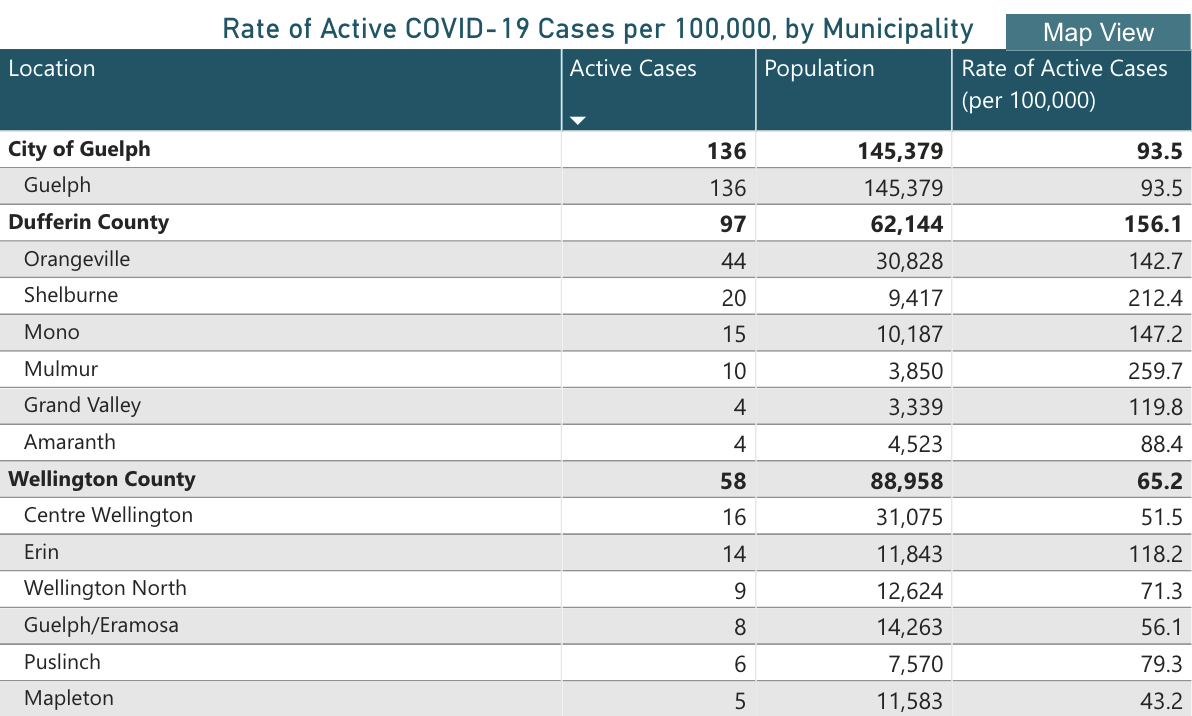 As of May 17, 128,379 residents in the WDGPH region have received at least one vaccine dose, pushing the region’s vaccination rate, for those aged 16 or older, past the 50 per cent threshold.

Public health is aiming to have 75% of the region’s eligible population at least partially vaccinated by June.

On May 4, an outbreak of COVID-19 was declared at Guelph General Hospital on the east units of floors four and seven, according to a May 5 press release.

Eight patients and two staff members have tested positive between the two outbreaks and a Guelph man in his 60s who was a patient on the four east unit died from the virus, WGDPH previously confirmed to the Advertiser.

All patients in both units have been tested, Guelph General Hospital spokesperson, Perry Hagerman, previously confirmed.

There are currently eight workplace outbreaks in the WDGPH region and two outbreaks at child care facilities: