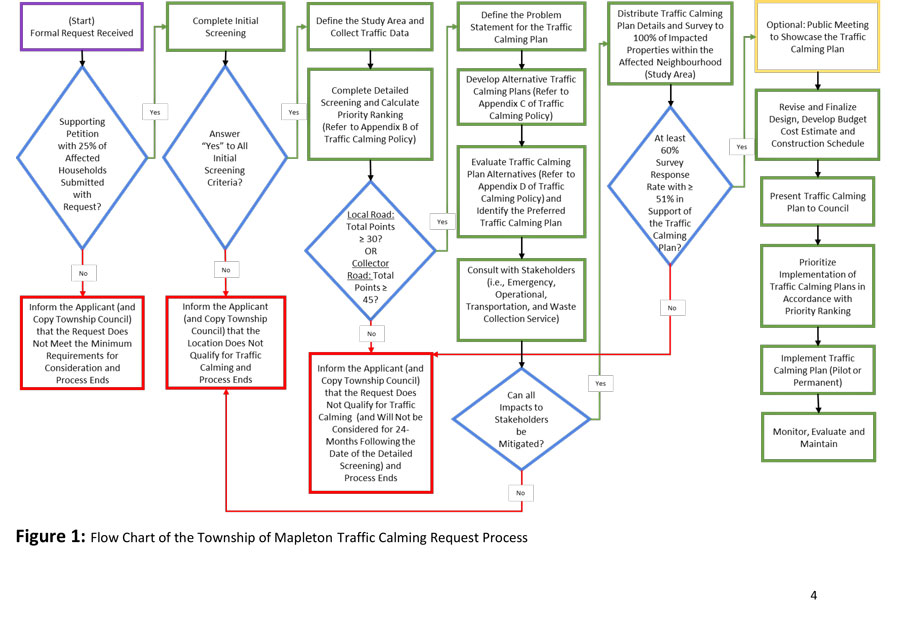 Traffic calming – This flow chart illustrates the steps to be taken as part of a proposed policy to deal with requests for traffic calming measures from Mapleton residents. Mapleton council agenda image

MAPLETON – A proposed policy on traffic calming measures was presented to township council at its May 10 meeting.

Public works director Sam Mattina explained in a report the policy is designed to guide the decision making process and allow staff to make “an informed and supported decision” in response to traffic concerns expressed by the public.

“It’s a tool for staff to use to mitigate any biased decision making, I guess you can say, relative to any traffic calming requests that we may get,” Mattina told council. “So, it’s a tool that the staff will use, to make a decision that will benefit the community in an efficient and effective way, without any criticism from anyone that guidelines were not followed.”

In addition, Mattina explained, “the policy does allow for risk mitigation to the township with respect to addressing issues that come our way and, even though the policy procedure allows for a timeframe to complete the actions that may come forward from it, the fact that we have a policy in place and act upon requests is a mitigating factor for us from a third-party claim perspective.”

In his report, Mattina notes that “from time to time, township councillors have received requests from the public to address various traffic-related issues.

“Many of these issues are presented on a general basis without substantiation other than desire for the change. This occurrence often puts the councillor in an awkward position, in that they have no scientific means to support or refute the request,” which results in “the implementation of an undesirable fix to a potentially nonexistent issue.”

The township engaged Triton Engineering Services Limited, at a cost of $22,350, to assist with policy development following requirements outlined in the Transportation Association of Canada (TAC) Canadian Guide to Traffic Calming and taking cues from policies developed by other municipalities.

The policy includes a step-by-step process for evaluating traffic concerns.

Following a request for traffic calming in a particular area, supported by a petition signed by 25 per cent of affected households, the process involves applying screening criteria to determine if the concern warrants further consideration, before collecting data for a more detailed screening.

If a need for traffic calming is verified a plan is created, including alternative solutions.

After a preferred solution is identified, further stakeholder consultations are conducted, followed by the finalization of a traffic calming plan for council consideration.

Once council approves a plan it is to be implemented and monitored for evaluation and maintenance purposes.

If it’s determined a traffic calming plan is not warranted following the initial or detailed screening process, the policy allows for other potential mitigation measures, such as creation of a Community Safety Zone or enhanced enforcement, to be implemented via bylaw.

Once the process is completed, and a traffic control measure is found to be warranted, the measure will be implemented for a 24 month-period to assess its effectiveness, before final measures are permanently implemented, Mattina explains in the report.

Council accepted Mattina’s report, as well as an education presentation from Triton Engineering on the policy, as information.