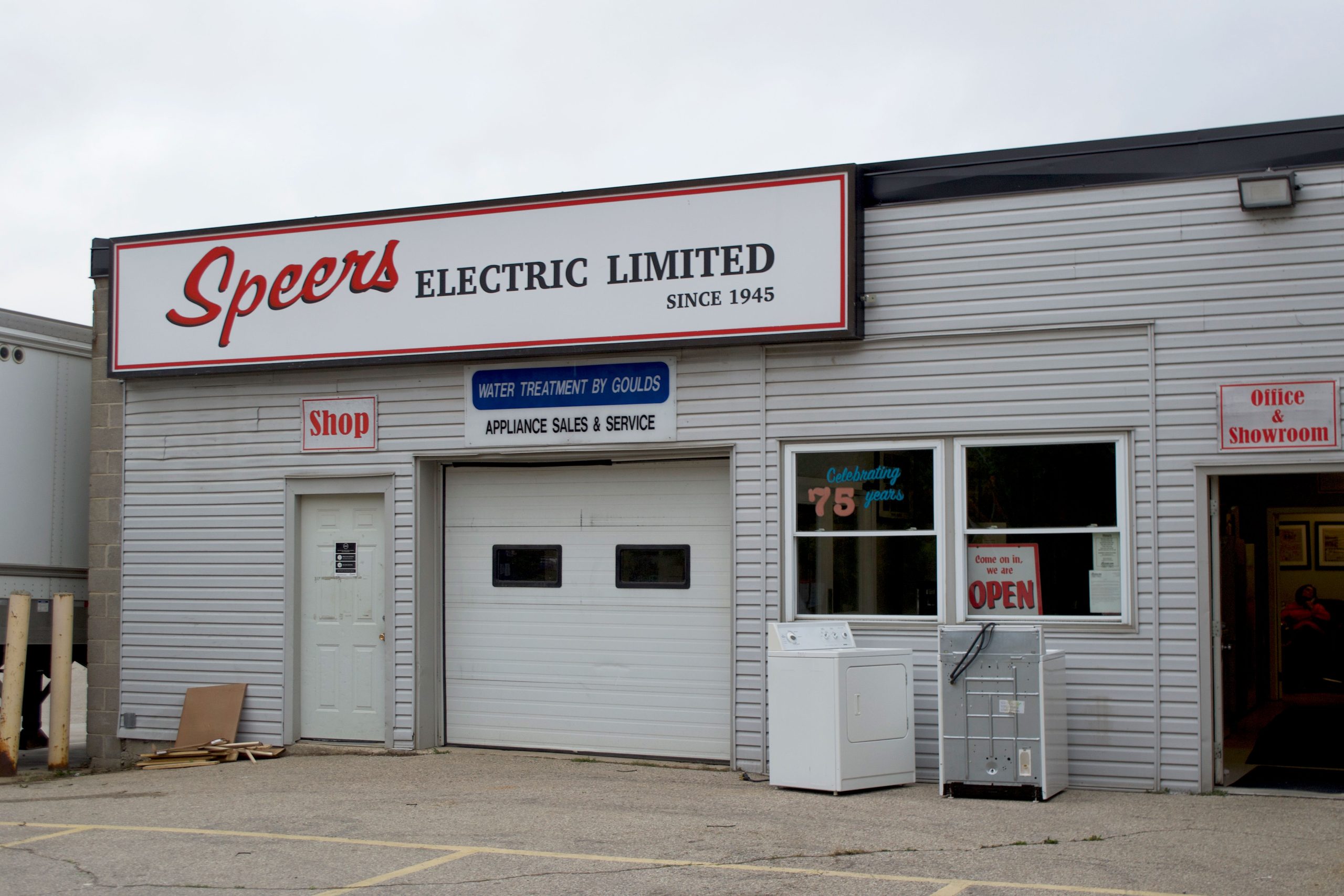 Celebrating milestones - Speers Electric officials are happy to have hit 75 years in business, in addition to being able to remain open throughout the pandemic. Photo by Drew Mochrie

ELORA – Having recently hit 75 years in business, Speers Electric’s retired owner Jim Speers is happy to have attained the milestone, in addition to being able to remain open throughout the pandemic.

Speers, who took over the business in 1969 from his father Franklin Speers, retired earlier this year.

Being an essential business, Speers said the company is constantly busy because it offers products and services that everybody needs.

“We do everything from electrical, pump work, generators, appliances and service, there’s not much stuff that we do that people aren’t requesting services for. We’re busy all the time,” Speers explained.

He said the company even saw an increase in demand for products and services during the pandemic.

“I think because people were at home, needed repairs, they saw appliances that needed replaced, rec rooms needed to be finished, home offices needed to be done,” Speers explained.

“For the longest time I didn’t understand why, there’s so many businesses and you feel badly for everybody [whose] businesses have suffered.”

He added, “It’s frustrating when some people have done much better than other people business-wise. Restaurants and the likes, I feel so sorry for them because they’ve been hard hit and then double whammy now that things are coming back, they can’t find help.

“But because we’ve got the staff and we’ve kept them on the whole time, we really didn’t miss any time off right since March of 2020.”

In terms of hitting milestone in the business, Speers said the family is proud of the fact they’ve been going that long.

“We try very hard to make sure everybody’s looked after properly, it’s sort of been a staple around our place,” Speers said on the success of the business.

“I’m sure Kyle (his son who took over in 2015) has had days he wondered why he took over – I know I had them when I took over – but we’ve been pretty fortunate.”

Speers added customers that come to the business expect a certain level of competence, and the company tries its best to provide it.

“I’m quite happy to say that we’ve attained it and I hope we make 100 (years),” he said. “I have a grandson that’s coming along … you never know, he might be interested in taking it over too, if he’s not an NHL superstar.”

Speers Electric office manager Cheryl Marsland said company officials weren’t sure what was going to happen with COVID. Initially they thought they were going to have to shut everything down.

“We do a number of different things. We of course do electrical, we do appliance repair, and we sell appliances as well,” Marsland explained of the services they offer.

“Those are kind of the main things, but we also have a few other smaller things like we sell parts and do some hot tub repairs.”

Marsland said the company has seen an increase in sales over the last year in comparison to previous years.

“We’ve definitely sold way more appliances than … average,” she explained. “Our appliance repair, typically you could get in within a week of calling for an appointment; now its two to three weeks before we can get anybody in.

“And electrical is also a few weeks longer than what it normally used to be as well.”

She noted, like many industries right now, Speers Electric is seeing supply chain issues, adding appliances as well as a number of parts are very hard to get right now, which has been a challenge for them.

“At any given time, we’ve got a number of appliance repair parts; we have probably about 50 that are on back order kind of rotating that we’re waiting for.”

To celebrate the 75th anniversary of the business, Marsland said Speers Electric have a washer and dryer and small fridge they’re going to give away as part of a contest, which she hopes will also boost the business’ social media presence, but the details are still being worked out.

“We’re trying to kind of roll it into our 75th anniversary and Jim, who was second generation owner and has been here for 52 years, he’s retiring so we’re kind of trying to roll it all into one,” she explained.

Marlsand added the company hasn’t really been able to celebrate the milestone due to the pandemic.

“We have kind of planned to have some sort of a drop-in but because of COVID and being allowed minimal people, sometimes no people at all, we hadn’t really worked on anything.”

Asked about the success of the business, Marsland said, “It’s been phenomenal, I’d say, or incredible on our end. I don’t think at all what is expected. We’ve definitely met some and surpassed some past sales over the years as well.”

Speers Electric will hit 76 years in business on Dec. 15.