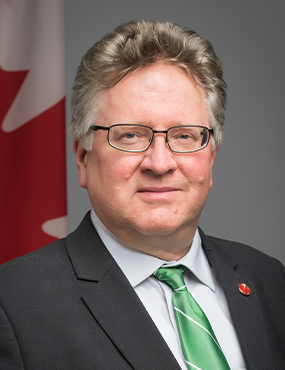 The association gives the award annually to a member of parliament or senator who has been supportive of the produce industry and effective at bringing industry issues to the forefront on Parliament Hill.

“Since his appointment to the Senate in 2018, we have been deeply appreciative of his engagement and consistent support for the Canadian fresh fruit and vegetable industry.

“We are pleased to honour Senator Black for his ongoing contribution to advancing the priorities of our members and the broader Canadian agricultural sector.”

In an interview from the airport in Calgary, Black said he’s “humbled” by the award and more determined than ever to bring a voice to the agricultural sector in Ottawa.

“In the Senate, my role is to speak for agricultural, rural and youth and I have stood up on a number of occasions to talk about agriculture,” he said.

Black worked with the Ontario Ministry of Agriculture, Food and Rural Affairs (OMAFRA) for 15 years and was executive director of 4-H Ontario for five years.

Since becoming a senator in 2018, Black sits on the standing committees on agriculture and forestry; social affairs, science and technology; rules, procedures and the rights of parliament; and the joint committee on the Library of Parliament.

His trip to western Canada was to tour agricultural facilities and talk to farmers and what he heard there is similar to the issues faced by farmers in Ontario, he said: transportation to market, a lack of processing facilities, access to water, access to the internet and finding a labour force.

“The pandemic has shown the holes in the system and underscored the challenges in agriculture,” he said. “We have to do better.

“There are not many senators with an agricultural background. That’s why I’m there,” he added. “In Ottawa, they’ll be hearing more about agriculture. I think agriculture has been elevated in the Senate chamber.”

In recognition of this award, Black will be featured in an upcoming episode of the CPMA podcast Produce Talks, in conversation with Lemaire. The 2021 Produce Champion will also be highlighted at the 2022 CPMA Convention and Trade Show in Montreal.

“I am honoured to be named 2021 Produce Champion and proud to advocate for the fresh fruit and vegetable sector,” said Black.

“They contribute so much to the agri-food sector and to communities across Canada and is sure to be a critical component to our country’s economic success moving forward.”

In February 2021, Black was recognized as one of the Top 50 Most Influential People in Agriculture by Canadian Western Agribition.