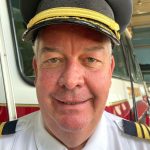 Puslinch council voted in favour of a motion to enter a shared service agreement with Centre Wellington for Tom Mulvey to be fire chief for both municipalities.

Brad Bigrigg has been serving as interim chief for the Puslinch fire department since August 2021, when Luis Gomes retired. Gomes had been at the helm in Puslinch since 2017.

Mulvey is to take over as fire chief in Puslinch on June 29 and Bigrigg will become deputy fire chief/administration the same day.

A service review in 2019 identified opportunities for Wellington County and its member municipalities to share functional management expertise across the county and lower tier municipalities.

Areas of need identified in that report included fire chief and both municipalities began working on an agreement for this arrangement.

Centre Wellington Mayor Kelly Linton called this a pilot project that will be revisited in 18 months and could be extended to three years.

Both townships have the ability to cancel the agreement in 18 months if it isn’t working out.

“This is an exciting partnership between two Wellington County municipalities that will benefit both Centre Wellington and Puslinch,” Linton stated in a press release after the June 27 meeting.

“We have an outstanding fire chief, and his expertise will be beneficial for Puslinch as well as a valuable development opportunity for our two deputy fire chiefs.

“Centre Wellington residents will see no reduction in services because of this mutually beneficial partnership.”

Seeley stated Puslinch council is excited about the agreement and he thanked “Centre Wellington council for supporting this partnership.”

He added, “Partnerships such as this are a great way to share resources, skills and experience and for the long-term benefit of both communities.  The Puslinch Fire and Rescue Services are a proud and important part of our community, now, and into the future.  We whole-heartily welcome Chief Mulvey to our team.”

This is not the first sharing of functional expertise.