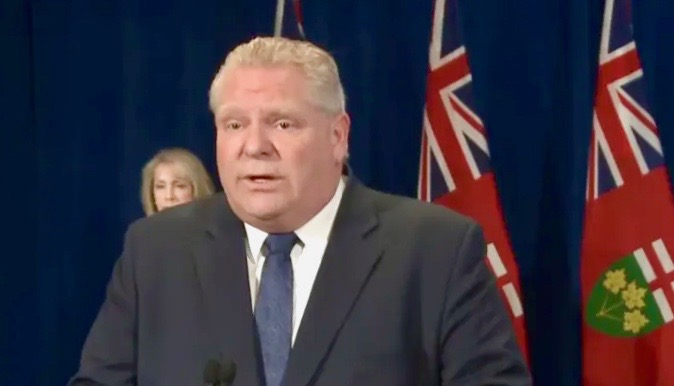 “Today’s numbers are deeply concerning,” said Ford during a press conference on Sept. 28.

“Our health officials are telling us that Ontario is now in the second wave of COVID-19.

“We know this wave will be more complicated, more complex; it will be worse than the first wave we faced earlier this year.”

Ford urged Ontarians to follow the guidance of public health officials, download the COVID Alert app and exercise caution in the coming weeks to help stop the spread of the virus.

“It’s absolutely critical,” said the premier. “If we can get everyone to take these simple steps, we can tip the scale.

“Our collective actions will decide if we face a wave or a tsunami.”

Dr. David Williams, Ontario’s chief medical officer of health, said public health experts have a lot more data at their disposal now than they did when the pandemic began, but it remains to be seen how the second wave will unfold in Ontario.

“We’re better prepared this time than the first wave; we have more things available, more documents, and more metrics being measured in all sectors,” Williams stated.

“We see those things nudging, and we want to move ahead of the curve… to stop this, to flatten this curve as we did successfully on the first curve. I think we can do this if we focus on the tasks at hand.”

Williams pointed out the provincial numbers are similar to the first wave, but he stressed far more testing is now being done.

Williams asked the public to “hunker down.”

“I think by everybody refocusing – we have some ideas and suggestions on that – we can turn this one around.”

Some regions to go back to stage two?

Some, including the Ontario Hospitals Association, are asking the province to move some of the hot spot regions – Toronto, Peel, Ottawa and York – back into stage two to help alleviate stress on the health care system.

Minister of Health Christine Elliott said on Monday she understands the concerns, but the province does not want to send regions back to stage two unless it’s absolutely necessary.

“If we have to, we will,” she said. “We’re watching this very closely.”

On Monday, the Ontario government also announced $52.5 million in funding to recruit, retain and support more than 3,700 frontline health care workers and caregivers to help meet any surge in demand.

The funding is part of the province’s COVID-19 fall preparedness plan, Keeping Ontarians Safe: Preparing for Future Waves of COVID-19.

“It’s the thousands of nurses, personal support workers, and other frontline workers who have made the difference in the fight against COVID-19,” said Ford.

“Today’s significant investment will allow us to recruit, retain, and quickly deploy a militia of health care heroes, caregivers, and volunteer professionals to care for our seniors and most vulnerable and ensure our health care system is prepared to deal with any outbreaks or surges in cases.”

Of the announced funding, $26.3 million is earmarked for personal support workers and $26 million for nurses.