MOUNT FOREST – Cassidy North, 14, from Mount Forest, is a standout volunteer in her community, choosing to spend her free time working with the South Grey Junior Optimist Octagon International (JOI) group, run out of Holstein. 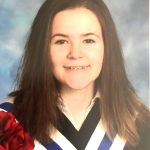 “JOI is a service group [where] you raise money and all the proceeds go to the food bank. There are nine members,” North explains.

She adds the club does road cleanups, fundraising and other activities. The group meets every second Tuesday to have a meeting, and plan for upcoming events. The club tries their best to host monthly events.

The youth has been a part of the club for three years, but had expressed an interest in joining for much longer. North notes, “My aunt, my sister and my cousins all [were in JOI], and I would always help them out. But you have to be 12 to join.”

However, her keen interest gained her a spot when she was 11.

Cassidy explains that her family is what motivated her to join this club. She says that “it’s pretty good [being in a club with her aunt and sister]. I was really shy at first, so you kind of have someone you know there so you weren’t too scared … Now I’m more comfortable, [so] it’s pretty easy.”

She also credits the club for helping her become more outgoing.

“You learn to talk to people. So if you’re shy, you can go up to someone and be like ‘How was your day?’”

North feels the impact of the club in numerous ways. She loves how, “there are so many people you meet when you’re cleaning up. You get to know more people.”

North also shares how fun road cleanups can actually be. She notes one of her most interesting finds was a dart board.

Not only has her role on JOI been beneficial to the youth herself, she also shares its benefit on the community.

“A lot of people ask about it,” she points out. The club helps bring the community together because “even when you do barbecues, people around the community talk to you.”

Cassidy explains the club’s barbecues raise money for the club to go to conventions with the other JOI groups around the world.

She has already been to Ottawa and is excited about attending an upcoming event in Chicago.

From working within the community to spending time with her family, North sums up the importance of her experience as a volunteer with JOI stating simply, “it makes you want to help more.”