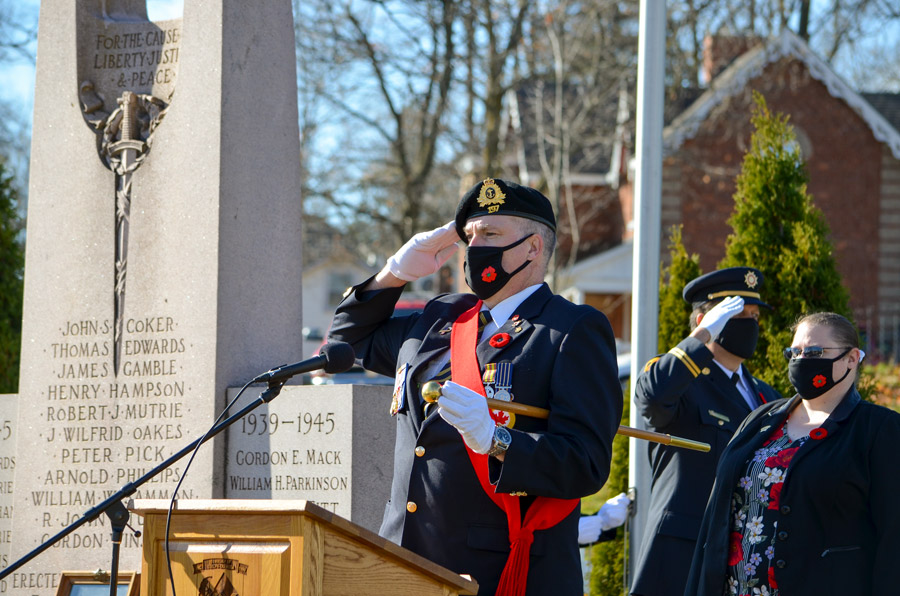 The Optimist Club of Puslinch is conducting Remembrance Day ceremony at the cenotaph outside the Puslinch Community Centre in Aberfoyle.

The ceremony will be much like last year, said Optimist Club member Vinnie Klimkosz – a drive-up event where people can sit in their vehicle or stand outside their vehicle for the service.

Things get underway around 10:45am on Nov. 11 and will end shortly after a minute of silence at 11am.

There will be a small procession, dignitaries will speak, three wreaths will be laid, and the names of the war dead will be read, Klimkosz said.

There will also be a piper and trumpeter.

Last year several transport trucks pulled off Highway 6 to observe the service from the roadside and numerous people stood outside their cars in the parking lot.

With hats over hearts, it was moving to witness.

“It’s a free event and we welcome everybody,” Klimkosz said.

The Arthur service will be at 10:45am on Nov. 11 at the Arthur cenotaph, located at the corner of George and Frederick streets.

The Legion Colour Party will meet at the cenotaph where wreaths will be pre-laid, with the exception of those representing Canada, the province, the township and the branch.

Past branch president Ken Englbey said the service will be “short and sweet” without any fellowship post-service at the branch.

“We can’t stop the public from going, I imagine there will be a few people there, hopefully,” he remarked.

A small remembrance service will be held at noon on Nov. 7 at the Belwood cenotaph located at the corner of Queen Street and 5th Street North. 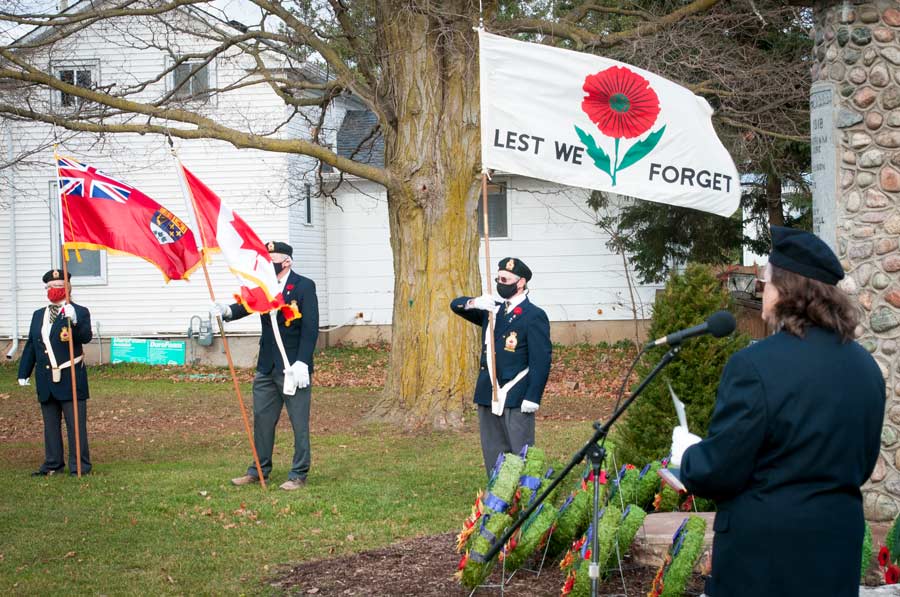 “We want everyone to stay safe as we remember those who fought for and died for our freedom,” said Miller.

She notes information about the branch’s youth education campaign has been distributed to the schools and the poppy campaign began on Oct. 29 as mandated by Legion Command.

It won’t quite be the same as normal, but Remembrance Day in Elora and Salem will have a little more fanfare than last year.

Jim Paterson, poppy chair for Branch 229, said there will be services in Salem and Elora on Nov. 11 and that streets will be closed this year to accommodate.

“Last year we did not seek a permit to close the streets,” he said. “We probably should have, even with a reduced crowd. The vehicle noise really interrupted the ceremony.”

This one is to honour those from former Nichol Township who participated in the major wars.

The service in Elora begins just before 11am on Nov. 11 at the cenotaph outside the municipal building.

“We’re not encouraging a large public gathering,” Paterson said. “We’re trying to be responsible. Even though restrictions have lifted, we’re going to have a safe ceremony.”

Paterson said there will be a small colour party and a single piper. Only four wreaths will be laid during the ceremony: one representing Canada, one for Ontario, one from Branch 229, and one from the Ladies Auxiliary Branch 229. Other wreaths – from families, local businesses and other organizations – will be positioned before the ceremony begins. 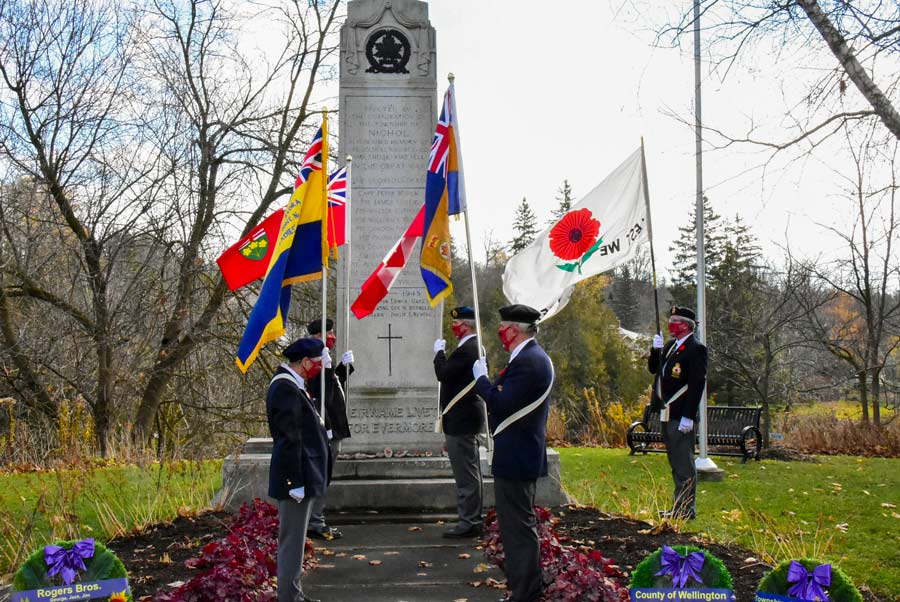 The Colour Party at the 2020 Remembrance Day ceremony in Salem. Advertiser file photo

In normal years five different clergy would also take part, but this year there’s just one: Rev. Susan Clarke, pastor for the Legion.

And only four cadets will be used in the service – one to stand guard on each corner around the cenotaph.

“Normally we have a group or a guard, but it’s not allowed this year,” Paterson said. “There are stringent rules they follow, and we follow. But we are able to use the cadets for the poppy campaign.”

Paterson said there aren’t many Second World War veterans still living, “but they are still part of the ceremony. We’re going to read the names of the members we’ve lost in the past 12 months as well. It’s very moving.”

There will be no dinner after the ceremony.

“We’re not able to do that for the second year. Everybody misses that,” he said. “We miss getting together. But we’re listening to the province and public health. And we’re also listening to Dominion Command, who decides what the ceremonies should look like.”

Paterson said folks who attend in person should take a walk to St. John’s Anglican Church on Henderson Street and see the poppy installation that’s draped outside the church.

The Erin Legion has confirmed it will be hosting an in-person Remembrance Day service at the Erin cenotaph on Union Street, just off Main Street.

The service will be held Nov. 11 at 11am, officials say. Wreaths will be preplaced prior to the ceremony.

We Will Remember Them – The Men and Women of Erin and District, a newly published book, is also available for a $25 donation to the Erin Legion Branch 442 Poppy Trust Fund.

At least one classroom will be attending the service at the Fergus cenotaph located at Norman Craig Square, according to Branch 275 president Randy Graham.

There won’t be a parade this year but Graham anticipates a larger turnout than last year.

Local firefighters will form an honour guard, a brass band will attend, and Graham is hoping for a few cadets as well now that they are permitted to help out.

Seven dignitary wreaths will be laid in-person with the rest, possibly upwards of 80, pre-laid.

Wellington OPP will be blocking off Tower Street between Queen Street and Union Street for the service.

Harriston Legion Branch 296 will be holding outdoor cenotaph services in Clifford on Nov. 7 at 2pm and by the Harriston cenotaph on Nov. 11 at 11am.

“Once again things will look different during this fourth wave of COVID with restrictions in place,” stated Branch 296 poppy chair Anne South in an email.

Wreaths will be in place with Legion members gathering at the cenotaphs, including a colour party  and trumpeter. Veteran names will be called out and published on the Branch 296 Facebook page.

The general public will need to mask and follow distancing requirements.

Although 100 per cent capacity gatherings are currently allowed at the Legion with proof of vaccination, the Harriston branch has “decided to go with the outside service only again this year,” South stated.

Poppy boxes have been set up at local businesses since Oct. 29 and will be in place until Nov. 11. Receipted donations to the Poppy Fund may be dropped into the branch office or sent to Box 118, Harriston, ON, N0G 1Z0.

“COVID-19 will not stop us from our duty to remember those who have served or are currently serving our country today,” branch officials state.

“Our support of veterans and their families is essential at all times. We will remember them.” 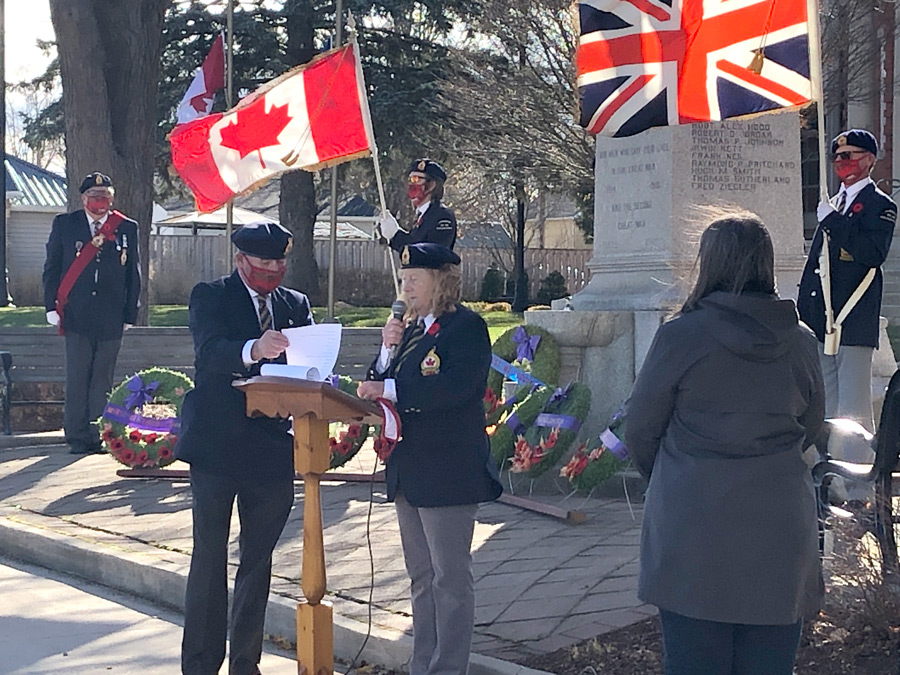 The Mount Forest Legion (Branch 134) will be having a small Remembrance Day service at the cenotaph located at Veteran’s Memorial Park beginning at 10:30am on Nov. 11 and lasting around 30 minutes.

Many of the wreaths will be pre-placed, Legion president Ken Thompson said.

There will be a small parade with a Colour Party, a piper and drummer from the Cameron Highlanders and a small group will be coming from Canadian Forces Base Borden, “placing a wreath on behalf of the soldiers of CFB Borden.”

Wellington North councillor Steve McCabe and Mayor Andy Lennox will also be present at the service representing the township.

Palmerston Legion Branch 409 officials note 2021 is the 100th Anniversary of the remembrance poppy in Canada.

The Palmerston Legion poppy campaign will proceed as usual until Nov. 11.

The branch’s remembrance service will be held at the Palmerston Cenotaph on Nov. 11 starting at 10:45am.

The public is welcome to attend this year’s service following current COVID-19 protocols.

“We ask that masks be worn since people will be standing closely together,” branch officials state.

There will be no parade to the cenotaph or social/lunch at the branch afterwards.

A drive-through roast beef dinner will take the place of the usual sit down meal. Call 519-343-3919 to book a pickup time. 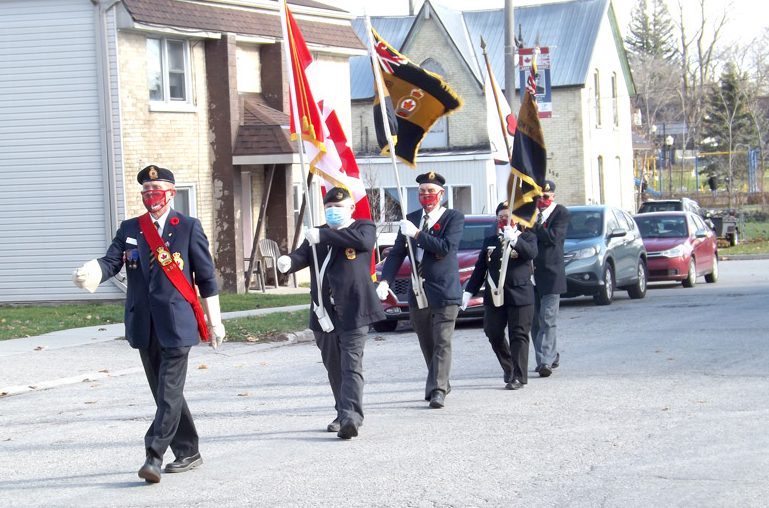 The Colour Party marches to the Palmerston cenotaph prior to the Remembrance Day service last year. Advertiser file photo

The Township of Guelph/Eramosa is hosting a Remembrance Day service in Rockwood on Nov. 11 at 10:55am.

As per the 2020 Remembrance Day Service, there will be reduction in people at the ceremony location and an adjustment in the format to allow the community to honour its veterans, officials say.

Spectators will be discouraged from attending in person due to the limited space and the requirement to physically distance.

The smaller number of people participating will be required to remain two metres apart and will need to wear masks unless performing certain duties related to the ceremony.