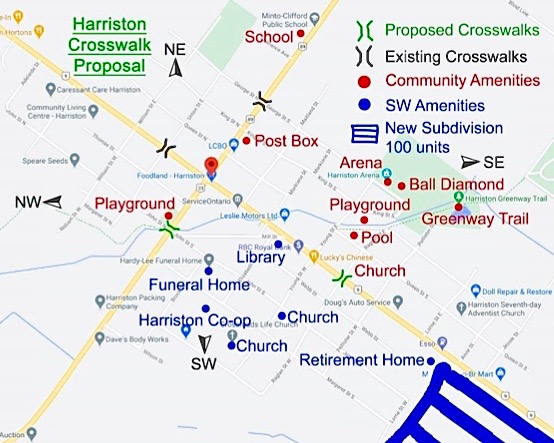 A map of Harriston, provided by a group of citizens, showing existing and proposed crosswalks. (Minto council agenda image)

MINTO – A group of Harriston residents is asking for two new pedestrian crossings to be installed in the community.

Rickson Sharkey and Jessica Decaire, representing a group of local families, presented council with a petition containing more than 100 names at the April 20 Minto council meeting.

“We are proposing to have two new crosswalks installed in town,” said Sharkey.

The petition calls for the crosswalks to be located at the corners of Elora Street (Wellington Road 109) and either Young or Raglan Streets, and Arthur Street (Highway 23) and either John or Margaret Streets.

In a letter to council, the group says pedestrian access to and from the southwest quadrant of the town “is unsafe at times when attempting to cross at busy times and/or with children in tow.”

“Our goal is to create safe routes to school, but also the arena, ball diamonds, pool, churches, playgrounds, business and other amenities for our kids, seniors and other residents – to access the town better overall,” stated Sharkey.

“We’ve noticed that, with COVID-19, local walking has increased as we try to stay local, exercise, support our small businesses … and we’ve noticed the need for crosswalks even more recently.”

The group points out a 128-unit subdivision is under construction in the southwestern portion of town.

“This will also increase traffic,” said Sharkey, who pointed out no new playgrounds are expected to be located in the subdivision.

“With so many new families and members of the community moving to Harriston, two additional crosswalks connecting the southwest quadrant to the rest of town will improve our town’s safety, access to businesses and amenities, and community events overall,” the letter states.

The residents say the “Type B” pedestrian crossings located at Arthur and George Street and Elora and William Street would also be suitable at the proposed locations.

Sharkey said the existing crossings “have improved safe school routes and they also have crossing guards.”

However, she pointed out, “They do not connect the southwest quadrant, which is the farthest from the school, which means these children have the longest and most dangerous route to school, with no crosswalk and no crossing guards.”

“We are also requesting crossing guards (at the proposed new crossings) and also sidewalks in town, but we realize that may need to be a different proposal,” said Sharkey.

“But we do hope that every child in Harriston can have access to a crossing guard to ensure a safe route to school.”

Decaire said, “It’s getting especially busy on weekends. It takes quite a while and it’s kind of a dodgy situation just to get across to the arena, the pool, the playground, the ball diamond, anything on that other quadrant.”

“It’s a busy road for sure, especially now that we’re getting into good weather,” said Mayor George Bridge.

He commended the group for their presentation and suggested council refer the matter to staff.

Council approved a motion to direct staff to prepare a report on the proposal.

“We will try to do this quickly as we’re moving into those summer months,” said Bridge.