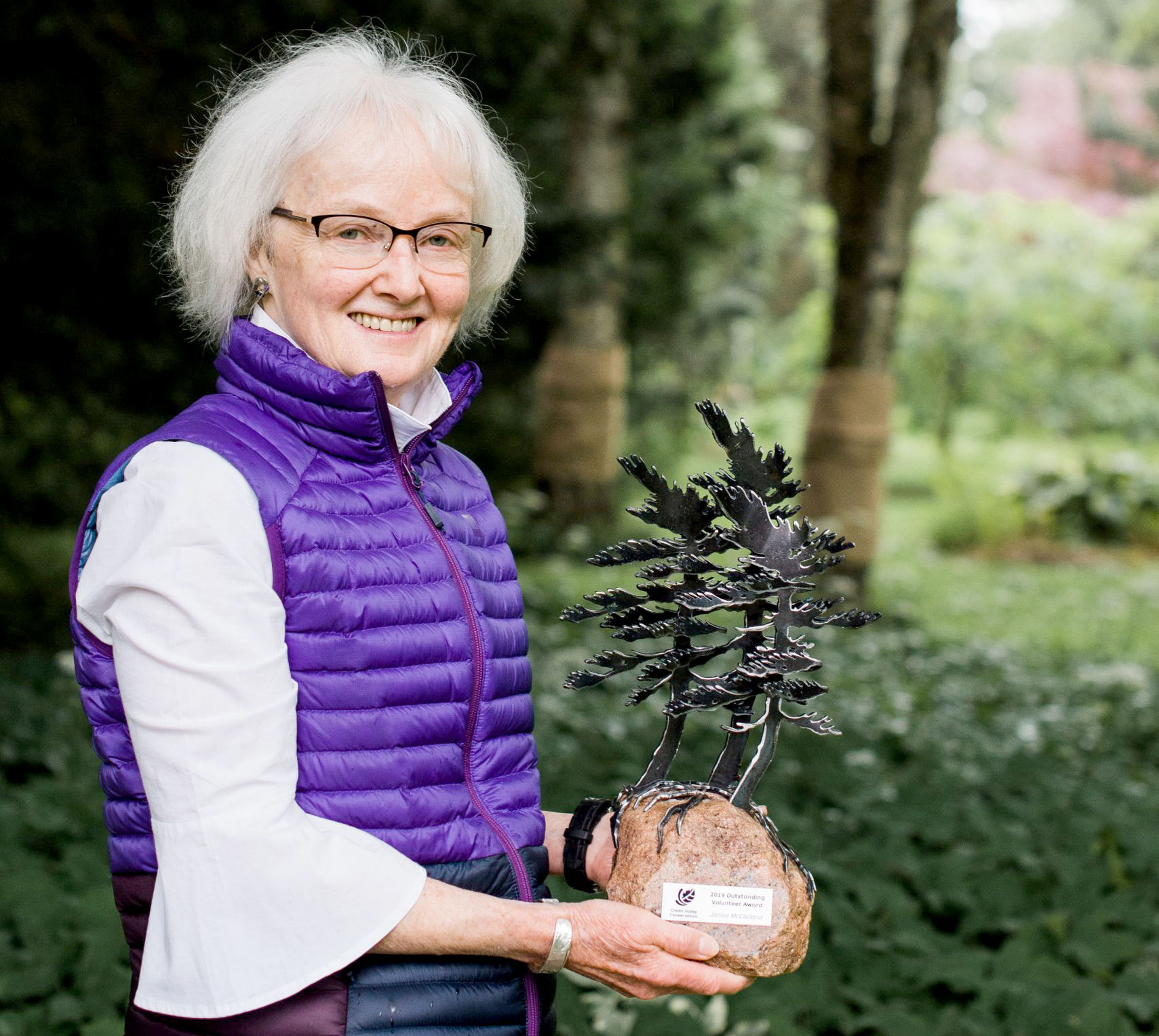 Erin resident Janice McClellan has been named the recipient of the Credit Valley Conservation’s Outstanding Volunteer Award for her dedication to protecting the lands of the Bruce Trail Conservancy. Submitted photo

ERIN – Town of Erin resident Janice McClellan has been named the recipient of Credit Valley Conservation’s (CVC) Outstanding Volunteer Award for more than 30 years of dedicated service to environmental protection.

McClellan is being recognized for her numerous roles and environmental initiatives with the Bruce Trail Conservancy (BTC), a non-profit organization that works to acquire and preserve land for nature reserves.

“The fact that I was nominated was quite a surprise to me and it’s a huge honour to receive this award,” McClellan said in response. “I’m one of many volunteers and I think I kind of stand in perhaps for many others.

“It was a marvellous personal recognition for both myself and my husband who has been very supportive in all my volunteer activity with the Bruce Trail.”

The award is a part of the CVC Friends of the Credit Conservation Awards and recognizes individuals and community groups who generously give personal time to protect, connect and sustain the environment.

CVC presented eight other awards recognizing individuals for their efforts in the community. To celebrate, staff personally delivered awards through a physically distanced curbside drop-off.

CVC community outreach official Lindsey Jennings said McClellan was selected for her tireless efforts to protect the Credit River Watershed through her significant involvement with the BTC.

“Janice has been fundamental in building connections in the community through her many efforts to protect the environment for future generations,” she said.

“She sets an outstanding example of what one person can help accomplish when they’re inspired by nature.”

During her time with the BTC, McClellan has held several leadership roles, including vice chair and chair.

She’s served as chair of the fundraising committee and has contributed significantly to the efforts to secure financial support from donors.

She’s also an active volunteer with of the Caledon Hills Bruce Trail Club, where she’s currently serving on the board of directors as a director-at-large.

“It’s just what I do because I have such a passion for this wonderful organization and what it means practically out there on the land and with nature,” she explained.

During her time with the conservancy, McClellan has worked to build an awareness that the Bruce Trail is more than just a hiking organization, but that it also works to gain environmental security.

“It’s our goal to preserve that land and continue to give people over the generations the opportunity to connect with nature in a responsible manner,” she explained.

“It’s just wonderful to be able to participate in this gift to the people of Ontario, this wonderful wilderness foot path over 900 kilometres long.”

McClellan even met her husband on a Bruce Trail hike. They recently donated to the Bruce Trail, which helped with the purchase of a large piece of land in the Bruce Peninsula around Cape Chin.

“It’s very rewarding to know that we have preserved all this land and the trail will carefully go through it and people will be able to appreciate nature there for generations to come.”

McClellan said her husband, who recently passed, was always supportive of her dedication to the BTC, regardless of some of nights she found herself working long hours.

McClellan said the BTC has been a huge contribution to their lives. Through her membership with the BTC and volunteer activities with the Caledon Hills Bruce Trail Club she’s made many friends.

“The Bruce Trail has been very helpful in my life and so my volunteer activity has been a way that I could show my appreciation for the wonderful experiences on the Bruce Trail and help to move it forward because that’s just such a wonderful mission to preserve a ribbon of wilderness for everyone forever.

“So, if I can be part of moving that into the future and helping that happen then I’m only too glad to put whatever skills I can to that purpose.”