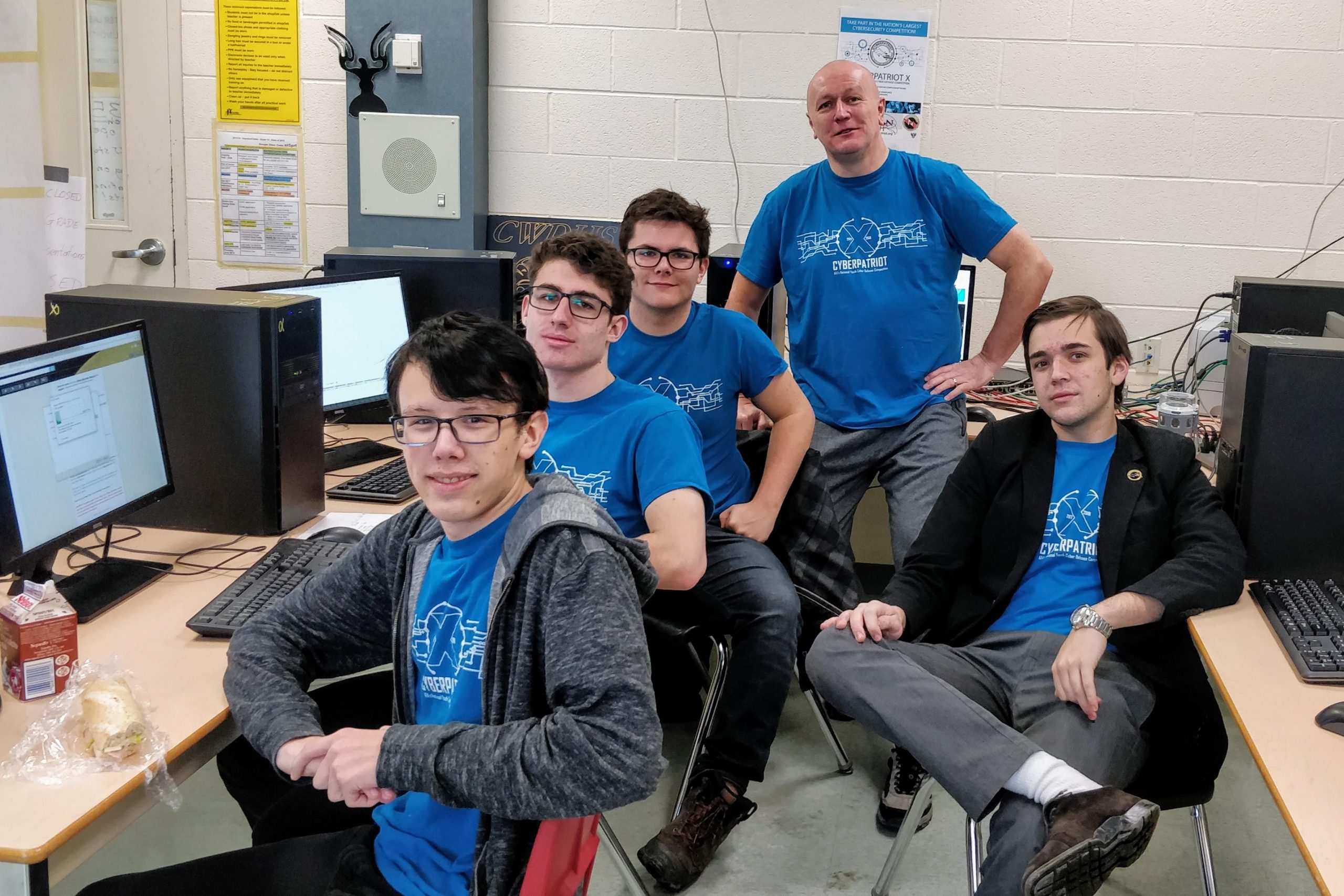 CWDHS teacher Tim King, back, poses with some of his computer technology students (pre-pandemic). Submitted photo

The UGDSB (Upper Grand District School Board) annually presents the awards to staff, students, community members and volunteers who “go above and beyond” to support local schools and communities.

King was nominated by several students and parents for his dedication and for helping students realize their potential – work that extends beyond the classroom.

King said the award came as a complete surprise to him.

“Getting this award has meant a lot to me.  This has been a difficult year that I’ve found particularly isolating as I’m now the only computer teacher at CWDHS,” he said.

“I’d started to believe that the work I was doing didn’t matter to the school, but this award, prompted by my students and their parents, has made all the difference.”

King’s enthusiasm for the computer technology program has led him to enter his students into competitions ranging from coding and electronics engineering to 3D character animation.

He began leading students in the competitions in 2013, when he took over the computer technology program. Since then, the school has expanded its competition offerings,  allowed students to explore their interests.

“Both of our Cyber Titan Canadian National Cybersecurity Competition teams are top 10 in Canada and will be participating in the national finals on May 17th.”

Under King’s direction, CWDHS became the first school east of Winnipeg to participate in the Canadian Cyber Defense Challenge.

Beyond competitions, King and his students have also completed a number of technology support projects at both the school and board levels.

“We’ve been doing in-school IT repairs for the past five years and in that time, we’ve enabled CWDHS to keep more old Chromebooks in circulation than any other school, ensuring that other departments around the building have access to the technology they need,” King said.

In 2015, they started researching virtual reality, and this expanded into a UGDSB Specialist High Skills Major (SHSM) project that saw King’s students building virtual reality systems for schools across the board.

“If anyone has used fully interactive VR sets in our school board, students at CW built them,” he said.

King is proud of the successes of his past students.

“We have graduates working everywhere from Tesla in firmware engineering, to Google in software engineering and in IT and game development roles all over the place,” he stated.

“The two students who helped me start the first video game development program in an Ontario high school went on to start their own game design business.”

King encourages and challenges his students and has inspired many, including female students, who are underrepresented in the field.

“When I started teaching computer technology, I was lucky to get one or two girls in the grade nine class, and we had no women in our senior classes at all up until three years ago,” said King.

“This year we had a dozen girls in the grade nine classes and three to six in each of the senior classes, and each year we manage to convince a few more to consider lucrative and high-demand computer technology pathways, gender assumptions aside.”

“The fact that girls are being systemically excluded from rewarding careers in technology is something I’m still struggling with,” he said.

“We’re still a long way from an equal distribution, but each year we struggle forward a bit more.”