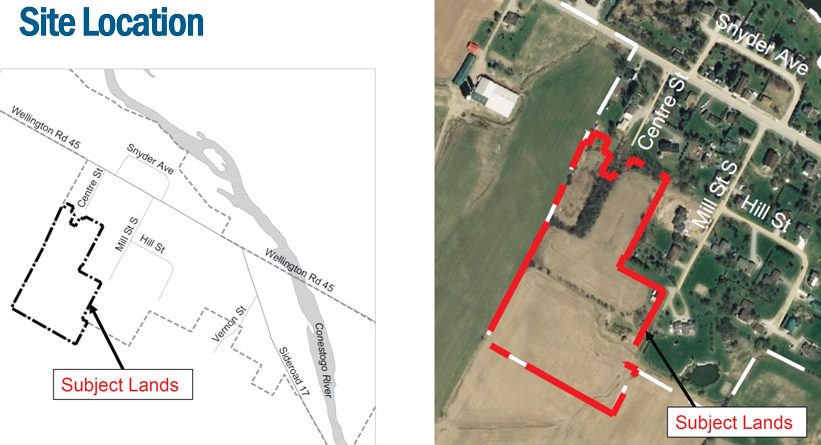 A subdivision containing 11 single detached homes is being proposed in the hamlet of Glen Allan. Mapleton council agenda image

MAPLETON – Concerns over traffic volume, parkland designation and sidewalks were raised during a public meeting on a proposed rezoning for a development that would include 11 single-detached homes in the hamlet of Glen Allan.

The applicant, Boomer Creek Inc., is seeking to have a 10-acre parcel of land rezoned from future development (FD) to unserviced residential (R1A) and open space to accommodate a stormwater management facility.

At the public meeting, held in-person at the Maryborough Community Centre in Moorefield on Sept. 14, township planner Linda Redmond noted that although a number of comments were received on the proposal, “for the most part there are no major objections to it.”

Redmond pointed out the proposed plan of subdivision does not include a parkland dedication and council should consider whether it wants land for a park or cash in lieu.

Redmond said staff will continue to work with the applicant’s planners and engineers to refine the proposal and bring it back to council for consideration when the plan of subdivision is close to draft approval.

One local resident asked about “the amount of traffic that’s going to be going up and down the road,” noting 11 houses probably means at least 22 cars owned by residents of the development.

Consultant Pierre Chauvin, of MHBC Planning, Urban Design and Architecture, noted “it’s not a huge subdivision” and the roads surrounding the development “could handle that type of traffic.”

However, Mayor Gregg Davidson said the traffic concerns “are noted.”

Davidson also stated, “its been this council’s approach,” on recent developments to ensure parkland is designated, rather than accept cash in lieu from developers.

Redmond advised the cash in lieu requirement in this case would be $1,400 per lot.

Councillor Michael Martin suggested it should be up to residents of Glen Allan whether they would like land made available for a new park, or if cash, which could be used to upgrade an existing local park, would be preferable.

“I don’t disagree with that plan. Talk to residents up in that area to see if they would prefer a new park or an enhanced park,” said Mayor Gregg Davidson.

“I’m very much in favour of an area for some playgound there … it’s important to have playground areas for them,” said councillor Dennis Craven.

Councillor Marlene Ottens asked if a subdivision including only single-family homes could meet density requirements under the province’s policy statement.

Davidson noted the Upper Grand District School Board, while not objecting to the development, stated in a letter its position was conditional on the developer providing adequate sidewalks, lighting and snow removal (on sidewalks and walkways) to allow children to walk safely to school or to a designated bus pickup point.

“Are they being put in place?” Davidson asked.

“At this point there’s no plans for sidewalks,” said Chauvin.

Davidson said, “I have a little difficulty not putting sidewalks in where we know there’s going to be children walking on the streets.”

Suggesting it is “good to build with the future in mind,” councillor Marlene Ottens said even if sidewalks aren’t required under current conditions, future growth may make them necessary.

“Sometimes a little foresight is required,” she stated.

However, councillor Paul Douglas pointed out “it doesn’t look like there’s any sidewalks (on streets leading out of the development) to connect to.”