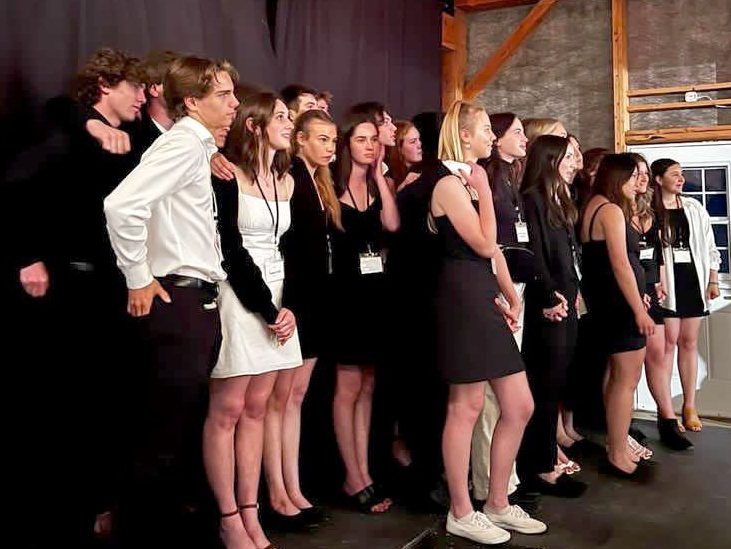 Upper Grand District School Board students of this year's Beyond Border's class have raised roughly $44,000 for selected organizations.
Submitted photo

GUELPH – Upper Grand District School Board (UGDSB) students in the Beyond Borders class have raised roughly $44,000 for local organizations.

This year’s three-day event, titled Envision, marked the tenth year of Beyond Borders supporting the local and global community.

“I don’t think I’ve ever experienced something like that,” Beyond Borders’ chief editor Olivia Manes said of the events.

“It was just so cool to see something we’ve been working for the last six weeks finally come together, and it was amazing.”

Each year, the class ends the semester by organizing, planning and hosting a fundraising event, raising thousands for local and national charities.

Every aspect of the series of charity events are coordinated, organized and executed by students.

This year’s events took place over a three-day period between June 10 and 12, with funds raised to be directed towards Doctors Without Borders, Guelph General Hospital and the David Suzuki Foundation.

To celebrate 10 years since the program began, this year’s class pushed limits and set the bar high, with a goal of raising $150,000 to distribute to the selected charities.

Although they didn’t reach their financial goal, Manes said the class achieved a larger goal.

“My main goal was just to put on an event that was meaningful for me, and was really giving back to charities, and I think that’s what we did at the end of the day,” Manes said.

“We raised a good amount of money and we’re going to be helping a lot of people in need and I think that’s all we wanted at the end of the day.”

Manes noted the class hasn’t been able to send money to the charities yet, “but since we’ve worked with a lot of these organizations in the past, I think the reaction is going to be positive.

“And I think we’re all just kind of happy to see that our money’s going towards a greater cause.”

Though the class knew for the past six weeks they were trying to raise a large sum of money for charity, it wasn’t until the final moment when the tally was announced that Manes said it felt real.

Manes said when this year’s fundraising total was announced, “It did kind of seem surreal.

“It was just crazy to imagine that we raised that much on our own, just a bunch of high school students.”

The three-day event kicked off on June 10 with a semi-formal evening at Strom’s Farm and Bakery that saw roughly 90 people in attendance, followed by a golf tournament on June 11 at the Hidden Lake Golf Club that had close 70 people participate.

The weekend concluded on June 12 with a second semi-formal evening at Strom’s Farm and Bakery, which Manes noted sold out, with roughly 130 people in attendance.

With the events and the program in general, Manes said the experience has been the most rewarding semester of her life.

“I’ve seen such tremendous amounts of growth in myself in terms of confidence, time management, leadership, presentation skills and so much more,” she said.

“I’ve watched not only myself, but my peers grow into a group of amazing young leaders.

“Just even within a matter of months, this program has given me an experience of a lifetime, and 37 incredible friendships.

“And I don’t think I’d trade that for the world.”