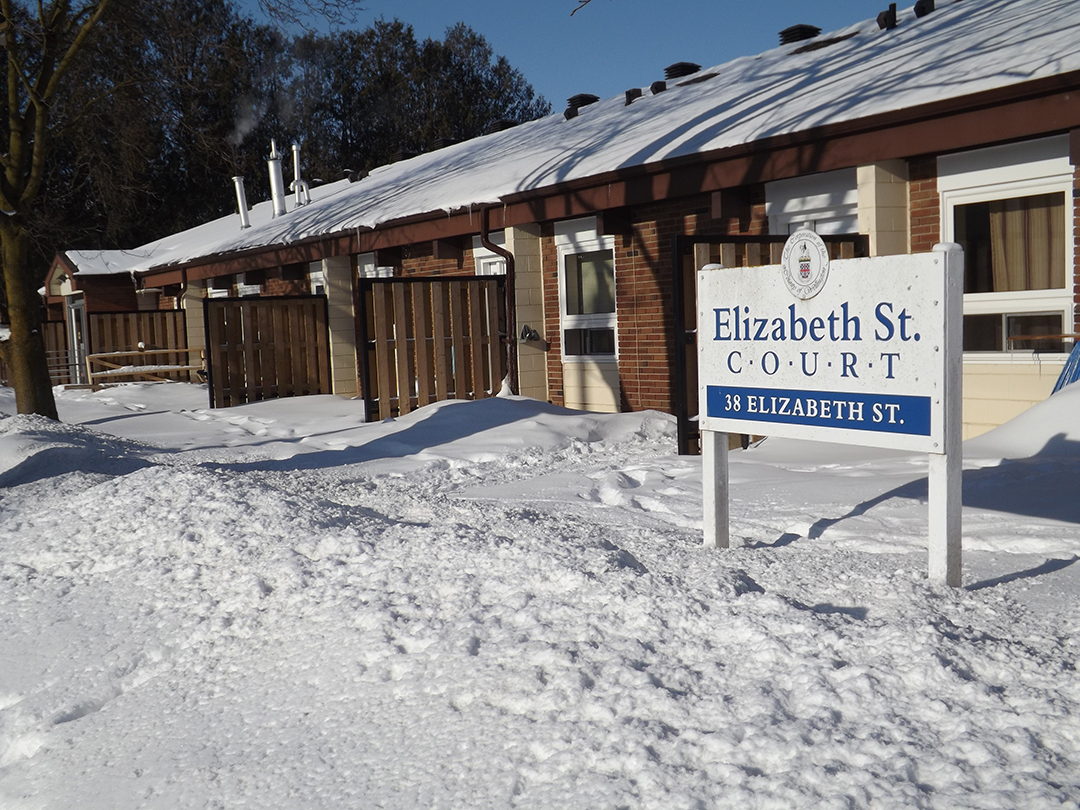 County housing - Wellington County operates a number of affordable housing and rent-geared-to-income properties across the county, including Elizabeth Street Court in Harriston. Photo by Patrick Raftis

HARRISTON – “Attainable housing” was the topic of a joint economic development meeting of northern Wellington municipalities on March 6.

Municipal staff and councillors, business leaders, developers and planners from Mapleton, Minto and Wellington North gathered to hear ideas on affordable housing from several speakers at the Harriston-Minto Community Centre.

“It’s an issue that’s gathering more and more attention across the country as we see what the community impacts are when people can’t find and maintain a safe, affordable place to call home,” said Poste.

“By 2041 our area’s population is expected to reach 303,000,” said Poste, adding  the highest rate of growth is anticipated in Centre Wellington, where the population is forecast to “almost double” in that time frame.

A lack of rental apartment units across the region is part of the reason for an affordability crunch, Poste explained.

“Sixty-three per cent of our housing stock is made up of single detached homes, with only 7% actually being apartments of five or more storeys,” he stated.

In Minto, Poste continued, only about 20% of the population are renters, while 80% are homeowners. However, 38% of renters are spending more than 30% of their income on rent.

“Which is very high. Thirty per cent is considered kind of a healthy rate, 30% or below,” Poste noted.

Mapleton has a smaller percentage of renters, around 13, “but still 33% of those who are renting spend over 30% of their income on rent.”

Renting is more prevalent in Wellington North, said Poste, where almost a quarter of households are renters, but 45% of renters are spending more than 30% of their income on rent.

Poste pointed out affordability is only one measure of “core housing need” in an area. Appropriateness of housing and state of repair are others.

With the average home priced at over $453,000, he said a household requires an income of at least $110,000 to purchase one. While the average after-tax household income is $118,474, that leaves many households below the cutoff.

Some couples, he noted, might have enough income to buy a house, but only if they forego having children.

“People are making some pretty awkward choices on this,” he stated.

Labour market issues, said Poste, are compounded by shortages in the rental market, as the current vacancy rate in the region is only 1%, well short of the 3% level deemed a healthy marketplace.

Poste said the county, which operates 10 affordable housing projects comprised of 320 dwelling units, is working on an overall housing strategy that will be completed by the fall.

The study will focus on accessible and rental housing in rural communities and identify strengths, challenges and gaps in the local approach.

An RFP was circulated in February to develop the housing strategy to determine what the County of Wellington can do to:

– identify short-term solutions for employers who need to house workers; and

One example she pointed to involved marketing a quad-style housing development initially aimed at seniors as a “first ownership model” for younger buyers.

“It just a different way of looking at houses and that people can get into them,” Etcher explained.

She also noted trends such as seniors sharing housing with students or other seniors represent other ways to maximize use of available housing.

“There are five million empty bedrooms across the province,” said Etcher. “It’s something to think about when you think about housing.”

Etcher noted CMHC offers a Seed Funding program that supports affordable housing through interest-free loans and non-repayable contributions. There are two funding streams: one for new construction/conversions, and one to preserve existing community housing projects. Community housing providers, municipalities, provinces and territories, Indigenous governments and organizations, and private sector groups are all eligible to apply for funding.

She also pointed to ways municipalities can encourage development of affordable housing, through such methods as waiving taxes or conversion fees, below-market land leases, loan guarantees or forgivable loans, modifications of development standards, donation of land or facilities, exemption from parking requirements and an expedited approval process.

Indwell is a Christian charity that creates affordable housing communities that support people seeking health, wellness and belonging. Its programs support more than 400 households in Hamilton, Woodstock and Simcoe.

Cubitt noted Indwell originated in the 1970s, when a lot of institutional settings were closing down.

While “de-institutionalization” was positive, Cubitt said “there wasn’t a lot of supportive housing being built” to facilitate those moving out of such settings. “I guess it was sort of that generation’s version of hallway health care,” he suggested.

Noting the Ontario Disability Support Program provides recipients with around $1,100 a month, Cubitt pointed out “in many communities that’s the average market rent now.”

He added, “Nowhere in Ontario can you rent for the current (ODSP) housing allowance of $489.

“So it’s really a challenge for anyone that’s living on a fixed income to be able to afford their rent.”

Cubitt said Indwell officials realized, “If we can deliver housing to a household at what they have available in their income, they can sustain that indefinitely.”

He added, “The challenge is there’s nowhere in Ontario that you can build an apartment anymore … that you can rent for $500 a month. So how do you bridge the gap between the actual cost of construction and the actual rent that someone can pay?”

Indwell officials realized over time they needed to focus on energy efficiencies in order to “future proof” their buildings against rising energy rates, carbon pricing and other variables.

The organization began to create “high performance buildings” through extensive use of insulation and air-tightness measures. Ideally, Cubitt explained, their buildings would operate on 50 kilowatt hours per square metre per year, rather than the 200kwh typical of buildings built to current standards.

Indwell also formed partnerships with municipalities, government agencies, charitable organizations and private donors to contribute to the cost of building and renovating.

“The final thing is the need to put together funding from various sources,” he explained. “There’s no one level of government that wants to deliver a funding program that’s going to create the whole building.”

For example, one project in Hamilton was put together with $5.7 million in federal funding, $300,000 in grants from the City of Hamilton and about $1.5 million in donations.

For some projects, Indwell has been able to access funding through Local Health Integration Networks (LIHN), whose directors understand “the problems you can have getting people out of hospitals.”

For a LHIN, he explained, contributing to a supportive housing project is “a heck of a deal” compared to value delivered through money spent on hospital or institutional care.

Minto economic development and business manager Belinda Wick-Graham thanked the speakers and urged attendees to “keep engaged and informed in what’s going on here and maybe we can make something happen.”

She added, “I think we all realized there was a problem, but when you have the numbers you can see it’s a very big problem.”

“Mapleton has zero. We don’t have it. We know we need it. We know we have a large population … that can’t afford to live in our community, so they move to Minto  … because it’s a little more affordable,” said Davidson.

“It’s sad to see our young people not being able to live in our communities.”

Minto deputy mayor Dave Turton said, “We are not unique. Mapleton’s not unique. We’re all in the same boat here. We’re rural Ontario and we’re in north Wellington. We’re not near a city.”

“I think as a community we have to try to tackle some of those challenges and see what kind of a role we can play,” said Lennox.