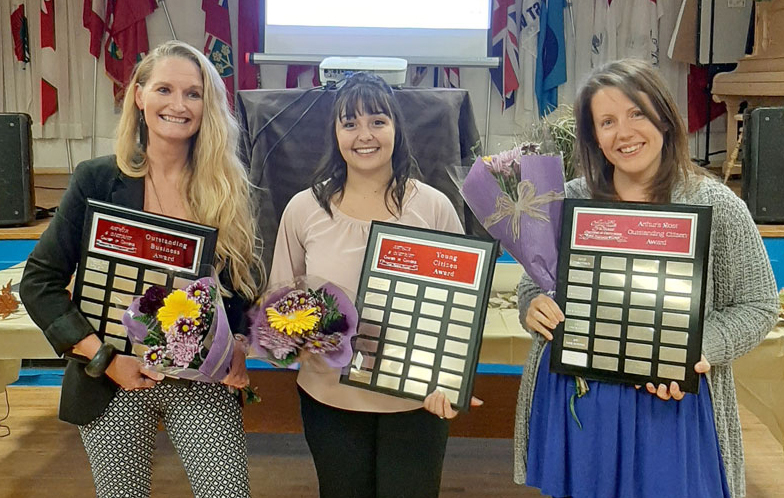 ARTHUR – Two citizens and two local businesses received recognition from the Arthur District Chamber of Commerce during its awards ceremony on Oct. 17.

“I think there’s so much reward that comes out of being involved with your community,” said Kelly.

The award, sponsored by the Arthur Opti-Mrs. Club, recognizes individuals who have given “outstanding” service in the area that “contributes to the advancement and well-being” of the community.

“It means that the work that we’re doing at the studio is making an impact in people’s lives,” Kelly said of the recognition.

Kelly has been teaching yoga in Arthur since 2011. It is through her work as a yoga instructor that nominator Tabitha Johnstone said Kelly connects with the community.

Johnstone has known Kelly since 2014 when Kelly was teaching yoga out of the Arthur Karate Dojo.

“I feel that Kristina Kelly is very valuable to our community; she is always looking for ways to connect the community through her small business,” said Johnstone. “Kristina always has new ideas and activities that she brings and offers.”

DiPucchio received the Young Citizen Award, sponsored by the township, which  recognizes a youth under 21 also for giving outstanding service

“I nominated Nicole because … she embodies all the qualities necessary to be an amazing role model for the youth in our community,” said nominator Amanda Rooney. “Nicole came to Arthur from Toronto and has fully embraced our small community. She is very active in her volunteering.”

DiPucchio did not respond to a request for comment by press time.

Fran Turnbull of Arthur Cash and Carry won the Corporate Citizen Award, sponsored by the township, which recognizes a large business seen to be an integral part of the community.

The Outstanding Business Award was presented to Sherry Lynn of Iscreamm Cone Company. The award was sponsored by the Arthur RBC Branch and recognizes a business for its positive business growth and contribution to the quality of life in Arthur.