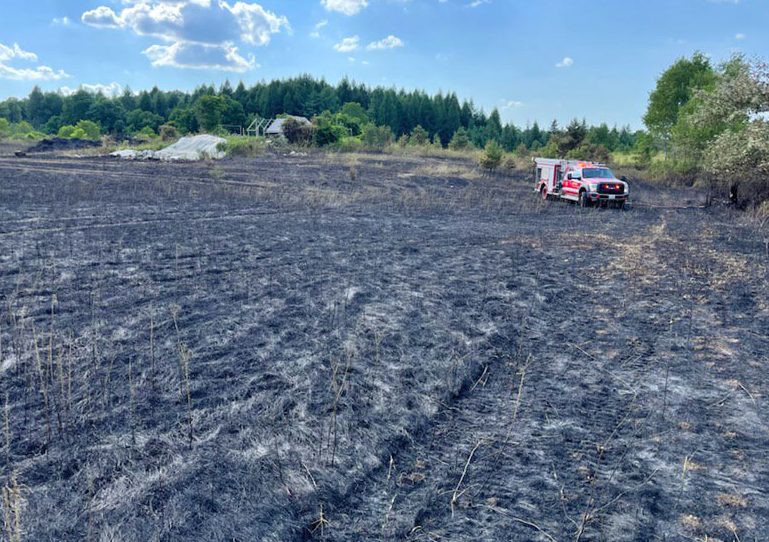 A grass fire at a home on Watson Road burned four or five acres of grass but did not cause any other damage. Submitted photo

PUSLINCH – Firefighters from three stations battled a grass fire on Watson Road for more than five hours on July 23.

And if it hadn’t been for assistance from Guelph/Eramosa and City of Guelph fire departments and their special firefighting ATVs – crews would have been out for several more hours, said deputy chief Brad Bigrigg.

“It was a very large grass fire,” Bigrigg said. “If not for the ATVs we would probably have been another two hours.”

Although the location of the property on Watson Road is close to train tracks, Bigrigg stressed that the fire was not sparked by a passing train.

“The homeowners believe it started from a spark from the lawnmower,” he said. “The fire burned toward the rail line and did not start there.”

Bigrigg said there was zero damage to property although four or five acres of field was scorched by the fire.

A few weeks ago, Bigrigg said the township was contemplating a burn ban because of the dry conditions, but so far it hasn’t come to that, he said.

“There are discussions among the fire chiefs in the county, but I think we had enough rain the other day,” he said.

He added that because of the dry summer, people need to be vigilant when cutting grass, riding an off-road vehicle, burning rubble or having an evening campfire.

“It doesn’t take much these days for a fire to get out of control very quickly,” Bigrigg said.