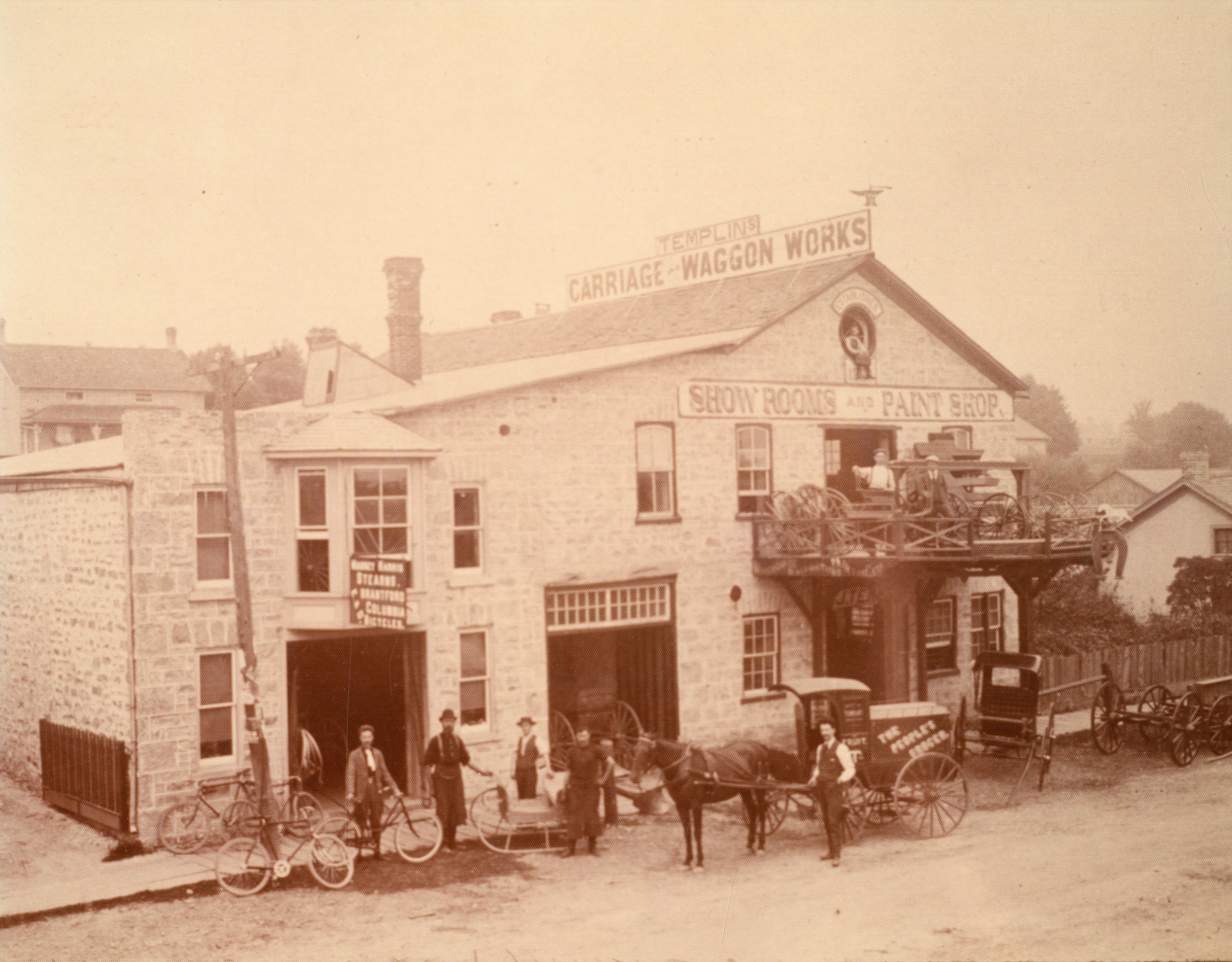 Major Fergus dealer - While not the first bicycle seller in Fergus, Templin’s had the largest selection and a major share of the market by 1897. Most were Canadian-made machines, sometimes using American designs under license. At least a half-dozen other merchants sold bicycles as a sideline in 1897. Wellington County Museum & Archives ph 3901

Over the past few weeks I have noticed that the occasional day of fine weather lures scores of cyclists outdoors. The bicycle has enjoyed a resurgence in popularity in recent years, but cycling goes back a long way in Centre Wellington. Cycling began as a fad, and it experienced its first flowering 100 years ago this spring.

In May 1896 a group of Elora cyclists met at the Commercial Hotel to form the Irvine Bicycle Club. The group scheduled recreational rides on Monday evenings, and held meetings once per month.

The formation of the Irvine Bicycle Club culminated a rapid three-year period in which the bicycle was introduced to Centre Wellington.

The first modern bicycles were sold in this area in 1893, by Craig’s Music Store in Fergus.

Bicycles in one form or another were around for most of the 19th century. First there was the velocipede, which gained some popularity in the 1860s. Later came the “Ordinary” or “Penny Farthing” model, with its large front wheel.

The bicycle in the form we know it today (equal sized wheels and a chain-and-sprocket drive) entered production in 1885. It relied on relatively cheap steel and advances in machine shop technology that permitted mass production of wheel bearings. The introduction of pneumatic tires in 1889 boosted the serviceability of bicycles.

Dozens of firms in North America entered bicycle production in 1891 and 1892.

Robert Craig in Fergus sold a few in 1893. Two years later there were additional dealers: Marshall’s jewelry store in Fergus and T.P. Smith’s Hardware store in Elora, followed by others.

By 1895, 30 or so brands flooded the market, most claiming new advances in technology.

The cost of bicycles in these early years restricted sales. The cheapest model cost about $65, and fancy ones as high as $125. This was a considerable investment when most weekly wages were in the $8 to $12 range.

The ranks of cyclists swelled during 1895. Racing quickly became a popular pastime, and a hazard to pedestrians. On one June morning in 1895, Fergus businessmen J.K. Richardson and James Babe (both of whom sold bicycles) raced each other up the main street. Babe lost control and ran into Constable Gill, with slight injuries to both.

Racing on a more organized basis quickly became fashionable. Waterloo hosted an organized race on Dominion Day in 1895 that attracted entrants from Fergus and Elora, and soon similar events were being held locally.

A few owners tried their skills at trick riding. A favourite trick with local show-offs was to do a handstand on the handlebars.

Sales of bicycles exploded in April and May of 1896. The papers reported a steady stream of cyclists through Elora and Fergus on Sundays, no doubt to the displeasure of hardline Methodists. Many were startled by the large number of women and older people who took up the sport.

Local livery stables began to rent bicycles as well as horses by the hour or day for those who could not afford to buy one.

A year after the formation of the Irvine Bicycle Club, Fergus residents started their own cycling club, in June 1897. It was an upper crust organization, attracting doctors and scions of the wealthier local merchants. The most enthusiastic members were John McFadgen, George Templin and Frank Farquier, clerk at the Imperial Bank.

Farquier demonstrated the increasing reliability of bicycles by making a round trip to Galt and Hespeler, returning in time for supper. As an after dinner constitutional, he followed this up with a round trip to Guelph, pedalling some 90 miles in one day. Other cyclists made longer trips, such as an excursion to Owen Sound by John McFadgen and George Templin.

Considering the condition of the roads, none of which were paved in 1897, these were remarkable feats. Cyclists also had to contend with poor tires, which were prone to blow up, sometimes throwing the rider to the ground. Stopping could be difficult. These early bikes had no brakes: the rear sprocket was fixed permanently to the wheel.

Templin Bros. in Fergus demonstrated the first model with a coaster brake in 1898. This innovation was eventually adopted by virtually all Canadian and American manufacturers.

The Fergus Bicycle Club began 1898 with high expectations for the season. Club organizers estimated there were over 200 bicycles in Fergus and area, and almost as many in Elora. Prices had dropped dramatically in three years: the $65 model of 1895 could be purchased for $15 in 1898. A brisk trade in second-hand bikes filled out the market.

Despite easier ownership, the fad for cycling had clearly peaked in the seasons of 1896, 1897 and 1898. After this period, most bicycle owners went on pleasure trips less frequently and the “wheel,” as the bicycle was commonly called, became a routine possession in most households.

On the other side of the coin, some cyclists became more obsessive. Most notable of these was John McFadgen of Fergus, who became Central Ontario chairman of the Canadian Wheelmen’s Association in 1899, and also served with the Canadian Road Club. McFadgen continued to organize and supervise bicycle races for several years.

Although the fad was over by 1899, bicycles continued to provide transportation and pleasure riding for many residents, particularly before automobiles became widely owned. The cyclists who venture out on our streets, roads, and the new Elora-Cataract trail are continuing a leisure activity that is a century old in Centre Wellington.

*This column was originally published in the Fergus-Elora News Express on May 22, 1996.