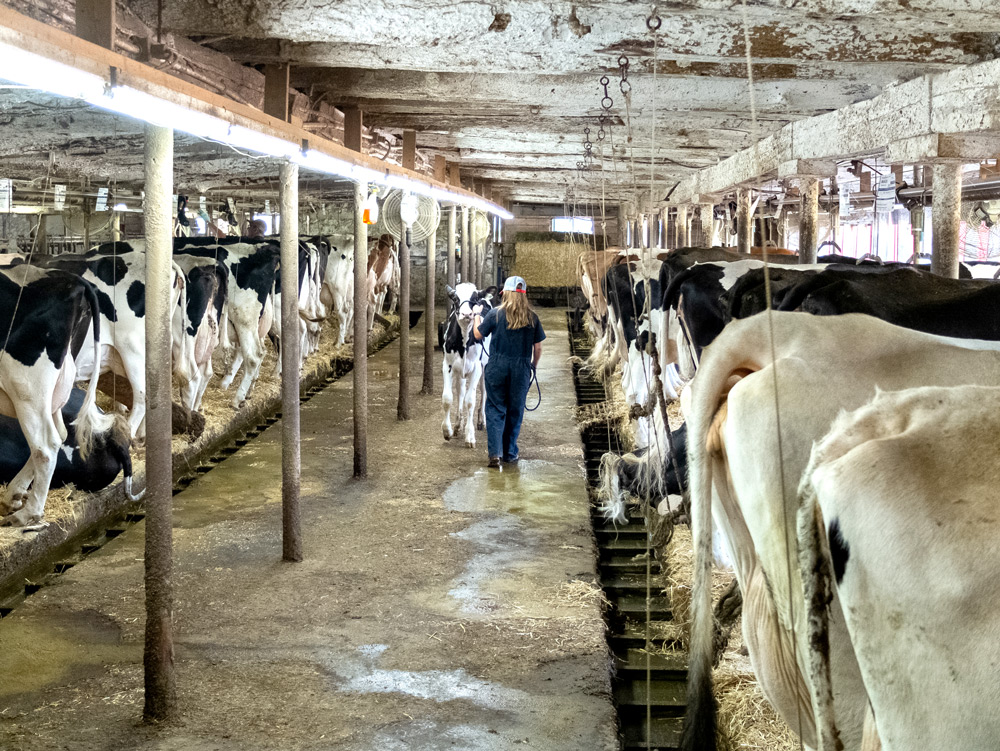 ELORA –  Inside a barn at Milky Hills Farm in Elora, 13 year-old Emma Vervoort leads her eight month-old calf Bonnie around a walkway bordered by some of the farm’s 50 large dairy cows being milked.

Bonnie, a Holstein, is hesitant around people but does okay around the other cows.

The siblings are in Eramosa’s 4H dairy club.

In a normal year the youth agricultural group would show off their calves and progress from months of training at the Fergus Fall Fair.

But with the fair’s postponement to 2022, the dairy club will be taking the show and judging virtual in the coming fall.

“We all either have to like take a picture or video, and they’ll just judge based off that,” Emma said, leaning on a shovel, her rubber boots specked with manure.

“I wouldn’t recommend swimming in it,” she quipped, glancing at the barn’s floor.

Judges won’t only be evaluating a cow’s appearance and build, but also looking to see how “in-sync” a trainer is with an animal while showing.

“If your cow’s acting up and running all around, and you can’t handle it … that’s not a very good job of training,” Emma explained.

“Also, they have [foot] positions that you have to put them in so the judges can see everything … some of the cows once you keep doing it, they’ll get used to it and then they’ll just as soon as you like, tell him to stop, they’ll just go right into that position sometimes,” she added.

“Every night we’ll walk around here, go out in front of the calves and then down behind them and then back around,” Emma said.

The process repeats four or five times a night, getting the calf used to its surroundings.

“Mine is very afraid of the buggy over there and the gate,” Emma said, gesturing. “Because they’re just a baby so they’re afraid of everything.”

In 4H clubs since the age of nine, Emma has a few shows under her cap.

But for Leanne, this is the first season wrangling a calf on her own.

Brown Swisses, like Kabana, are a more temperamental and less agreeable breed, so she has her work cut out for her, still getting Kabana used to ambling around inside the barn before moving onto foot positioning.

“Right now, the challenge is just getting her to walk slow, she really likes to run,” Leanne said.

The calves also need to be fed daily and kept clean.

The girls’ father Shawn, and grandpa Henry, keep an eye while working chores around the barn but otherwise hang back and allows the girls to navigate stubborn challenges on their own.

“Showing makes me a little nervous because I’m going in front of all those people, but really it’s fun for me,” Leanne said.

“To me it’s work ethic and responsibility,” Shawn said. “To a certain extent I help out, but really it’s them.”

The 4H club not only builds confidence by doing the work and public speaking at events, as Shawn points out, but also provides the girls opportunity to meet other children doing the same things in agriculture.

“All summer long they work away at this,” Shawn said, hoping that come fall, there will be somewhere the girls can actually exhibit.