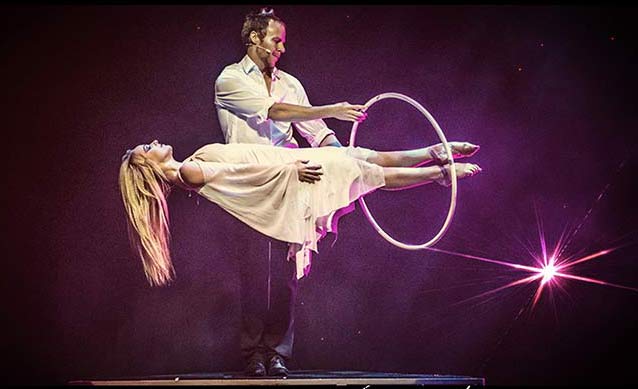 Magic - Fergus magician and illusionist Ryan Joyce is co-organizing and performing at the first annual Ontario Week of Wonder Magic Festival in Fergus from Oct. 24 to 27. Submitted photo

FERGUS – The magicians are coming.

Later this month world-renowned magicians and illusionists will be descending on Fergus for the first Ontario Week of Wonder Magic Festival.

The festival runs from Oct. 24 to 27 with theatre shows at the Fergus Grand Theatre, free busker-style street performances and table-side shows at several restaurants in downtown Fergus.

This inaugural event is co-organized by local magician and illusionist Ryan Joyce.

About two years ago Joyce organized a filming of world class magicians that he hoped to sell to a company like Netflix. While the film didn’t sell, Joyce said the community experience was worth it.

“We invited people to the community to see the show, but we told them ‘come eat in our town, and enjoy… what we have to offer,’” Joyce said.

People received admission to the performance if they showed a receipt from a local restaurant.

When the township added up the receipts the impact of the meals over two days  “was over $10,000,” Joyce said.

“So we knew that …there was something bigger that we could produce and it would have a bigger impact.”

That “something” ended up being the Ontario Week of Wonder festival, which Joyce said will complement Monster Month in Elora.

“We think this really is a nice addition to October, the 31 days of celebration –  plus, magic is of historical, October significance,” he said.

A magician convention will also take place in Fergus, in conjunction with the magic festival.

“Kind of secret events happening at the library,” Joyce said. “We’ve rented out the third floor there … (to offer) lectures from world class magicians. Secrets shared within the walls … as a way to sort of … create a new generation of education.

“Something unique trying to establish our area as a world class destination for magic.”

Joyce said he’s encouraging magicians attending the convention to get out in Fergus and entertain, “as they’re walking between events, and as they’re eating, as they’re seeing, exploring Fergus.

“You know, people are there for the festival, they want to see magic … we’re encouraging everyone to share the talents and gifts that they have.”

Local magicians will also be getting involved and performing up close magic at restaurants from Oct. 24 to 27.

Participating restaurants will be posted on the magicfestival.ca website closer to the date of the event. For tickets to the Ontario Week of Wonder Magic Festival and for more information visit magicfestival.ca.

Joyce also encouraged those interested to look on the festival website on Halloween at 9:31pm for a live stream of a video filmed throughout  the festival.