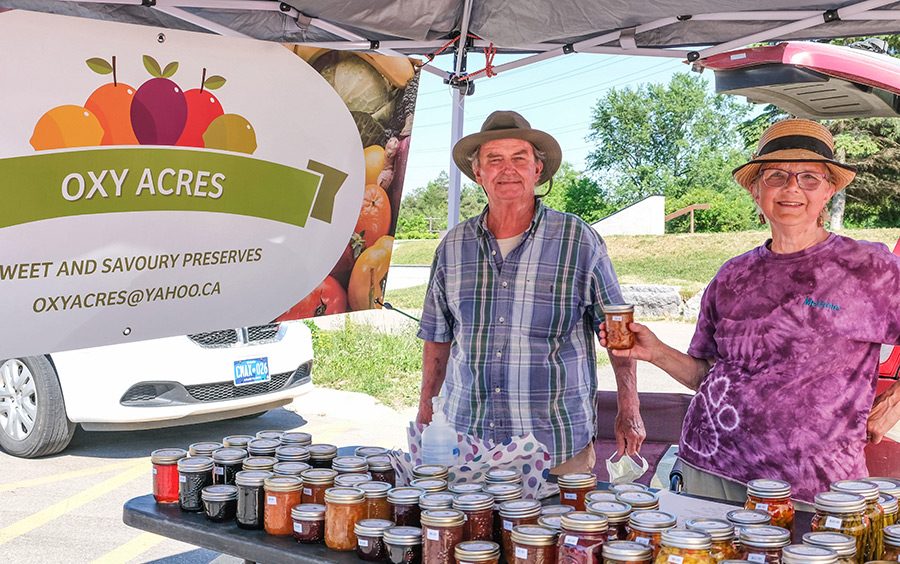 This year’s Rockwood Farmers Market will open June 9, and operate until Oct. 7. The market will be held every Wednesday from 4 to 7pm with new vendors this year. Peter and Melanie Morel of Oxy Acres Sweet and Savoury Preserves are among the local vendors. Submitted photo

ROCKWOOD – The annual Rockwood Farmer’s Market begins June 9 and will be open every Wednesday from 4pm to 7pm until Oct. 7.

This year marks the seventh year for the market, and its second year at Rockmosa Park.

With pandemic protocols, the market will look a lot like it did last year.

Market organizer Jen MacLeod said it will be a similar set up to grocery stores with a single direction flow for foot traffic through the loop and a single entrance and separate exit. Customers can go around the loop as many times as they want to get their shopping done.

MacLeod said an important feature to note for people entering the market is only vendors can touch the products.

Shoppers will tell the vendors what they want and vendors will pack it for them and put it on the table where they can then pick it up.

“We will have 25 vendors each week and over the course of the summer people will see approximately 45 different vendors,” MacLeod explained.

“It’s the widest selection that we’ve ever had.”

“The thing that I think will be interesting is, for people who do come every week, they will see something different each week because we have these occasional vendors going through.”

This year, market-goers can expect to see some new features, including five local microbreweries in rotation each week and, for the first time, local cheese every week.

MacLeod noted some big news for Rockwood. For anyone who’s been missing the Nutella pockets from Good Fellas, which recently shut down, they have reopened as Claudia’s Fine Foods and will be coming to the market as a full-time vendor.

“We’re really lucky because I know people miss them so this is going to be amazing for people that already know their products,” MacLeod said.

“We pretty much have everything you could wish for at the market.”

Macleod said this year officials have taken a large step in adding more vendors to draw in traffic.

“We feel like we need more vendors in order to draw more shoppers and so we’re really hopeful this year that by having this really full, incredible range of products that we get everybody out,” she said.

“In partnership with all Wellington County markets, we’re going to be offering market boxes available for purchase and they can be picked up or delivered anywhere in the county,” MacLeod explained, noting the date is still to be determined.

Another added feature is a market trail passport for Wellington County markets.

“Basically it will be something that encourages people to explore all of the county markets and there will be prizes for visiting a certain number and for completing the trail,” MacLeod explained.

The market will also be offering a pay and pickup feature as well as local delivery of market orders for a $5 delivery fee. Orders will be delivered on the evening of the market.

“It’s a full market but it still has a small-town feel to it. People really get to know the vendors and return to them each week, which is really nice,” MacLeod explained.

“We’re just trying to strengthen those networks right here in our own community and we have just an incredible range of products available right around us.”

She added, “This year we do have a few restrictions, but I think given what we’ve all been dealing with in terms of restrictions in our lives, I think an outing to the market is really going to feed people’s souls this year.”