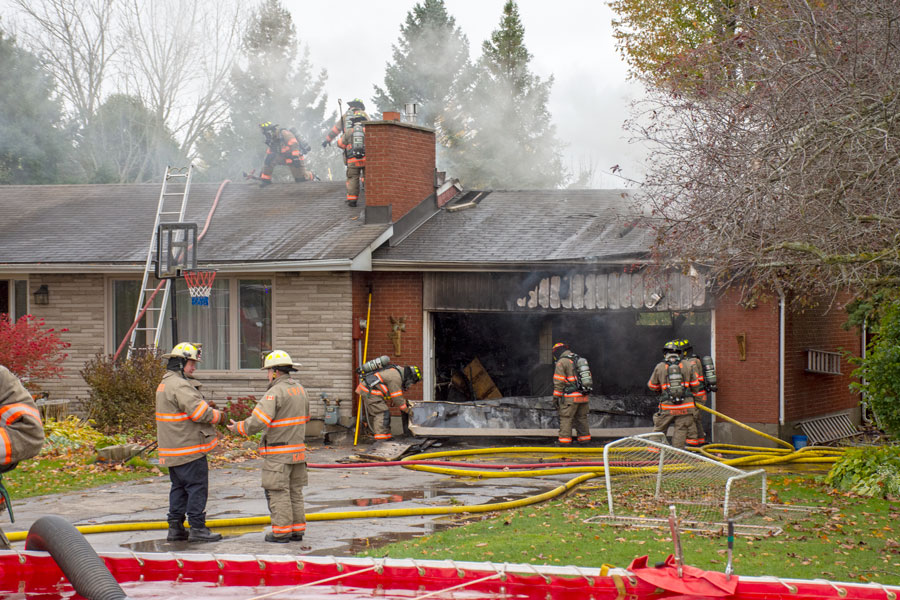 Garage fire - A fire at a residential property on the 2nd Line E in former Pilkington township (northeast of Ariss) caused extensive damage to a garage estimated at $150,000. Photo by Aryn Strickland

CENTRE WELLINGTON –  A garage fire on 2nd Line East in former Pilkington township, northeast of Ariss, has caused an estimated $150,000 in damage.

“We had heavy flames coming out of the garage area and along the rooftop,” Patton said at the scene.

About 20 firefighters  from the Elora and Fergus stations battled the blaze with additional tanker support from  Guelph City Fire Services. There were no injuries.

When the Advertiser spoke to Patton the flames had been put out and firefighters were checking the rest of the roofline for possible extensions of the blaze.

Deputy fire chief Jonathan Karn later told the Advertiser firefighters were able to stop the fire before it spread to the rest of the house.

“It’s important to point out the garage was attached so there was some damage inside the home,” said Karn.

“But we were able to save a significant amount of the homeowner’s contents inside the main house and it was limited to just some water and smoke damage.”

Fire officials say the blaze is being treated as accidental.