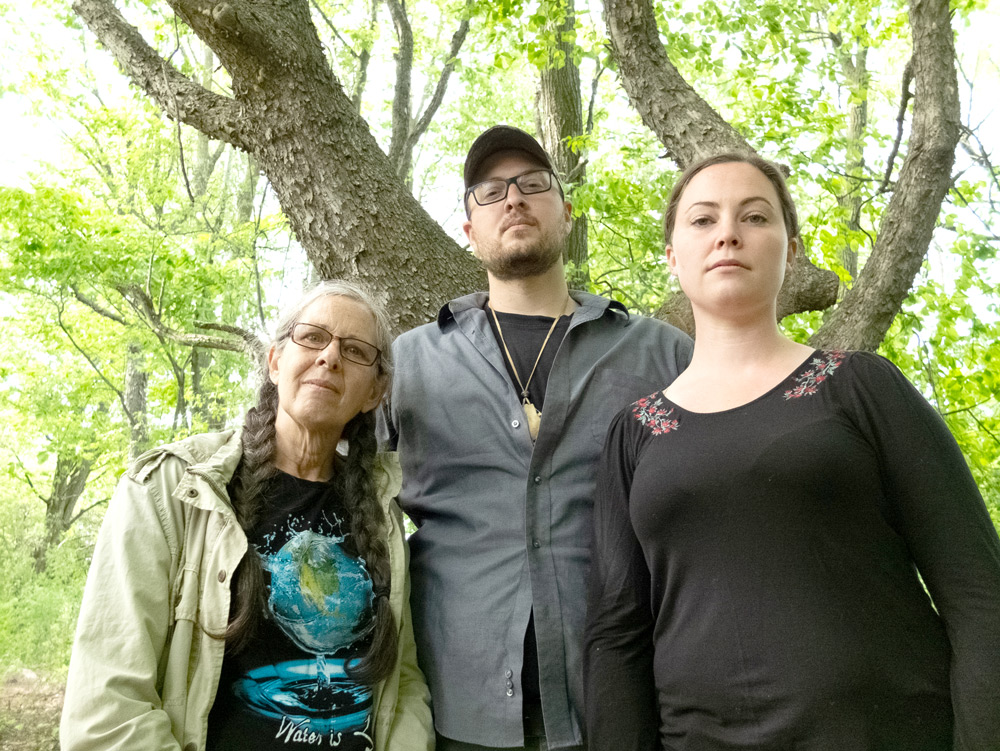 Brenda McDonald, Wallace McDonald and Katie Frost in a forested area where they say a home developer recently crossed a boundary, clear-cutting trees from the property where they farm. Photo by Jordan Snobelen

OSPRINGE – In a forested area at the back of Crest View Farm here, it’s eerily quiet, save for the rustling of leaves on the remaining trees on either side of a bulldozed path running the length of an adjoining farm field.

Where trees once stood and wild leeks grew, there are now oozing stumps, imprints left from the tracks of heavy machinery and a florescent orange hashed border line spray painted on the forest floor.

On one side of the line are “additional lands” owned by Thomasfield Homes – part of the ongoing Ospringe Highlands residential development — and on the other is a 24-acre farm property, where Wallace McDonald has lived with his wife Katie Frost and their daughter since 2018.

Together, they farm under the banner of Credit Valley Farms, regularly attending farmers’ markets in Georgetown and Acton to sell their garlic, flowers and maple syrup tapped from trees on the property, though McDonald says that revenue stream has dried up now, on account of the missing trees.

The 60-home Ospringe Highlands residential development sits at the corner of Wellington Roads 124 and 125, spreading south across nearly 45 acres of land, straddling agricultural land to the southwest and existing residential space to the southeast.

On a May 7 walk at the southeast side of the farm, McDonald and his wife Katie Frost discovered a 300-foot path had been clear-cut through a forested area McDonald claims sits, at least partially, within the farm’s property boundary.

“We both kind of stopped and looked at each other, kind of looked around and went like, you know, what’s happened here?” McDonald said recently, looking on at a pair of seemingly condemned black cherry trees, their trunks stained with an orange “X.”

In the County of Wellington’s December 2017 notice of approval for the Ospringe development draft plan, there are requirements for fencing to be installed along various perimeter locations and it’s to accommodate machinery to install fencing, McDonald believes, that the path was created.

As a non-status Indigenous person with Abanaki (Algonquin) heritage and a member of the Painted Feather Woodland Métis, nature takes on a spiritual meaning for McDonald.

Walking between beams of sunlight twinkling through the canopy of sugar maple, white ash, black cherry, American basswood, American beech and trembling aspen trees, McDonald would connect with the spirits of his ancestors before “smudging” to cleanse himself of bad spirits and energy, using fans made of turkey feathers collected from the wooded area.

“This was kind of the one place I can kind of get back in my cultural touch … I don’t even know what to say, because you look down at it and it’s just, it’s decimated,” McDonald said.

The day after the discovery, McDonald began reaching out to a litany of government agencies, including: the County of Wellington, the Town of Erin, Wellington OPP, Environment and Climate Change Canada and Thomasfield Homes.

Around 10 days after the initial discovery, McDonald says he returned to find trees marked with “Xs” and the newly spray-painted border line separating the properties — a line he claims encroaches on the farmland.

“Some spots are 11-feet across, and then another spot is only three feet, four feet across,” McDonald said.

“I think it was a way for them to try and say like, ‘The damage isn’t as significant as you think it is, because, you know, everywhere where it got taken out, it wasn’t a 100 per cent on your side,’” McDonald said of the line.

The Advertiser spoke with Thomasfield Homes vice president of finance Tom McLaughlin, who said the company is working with McDonald to understand his concerns and determine how to resolve the matter. 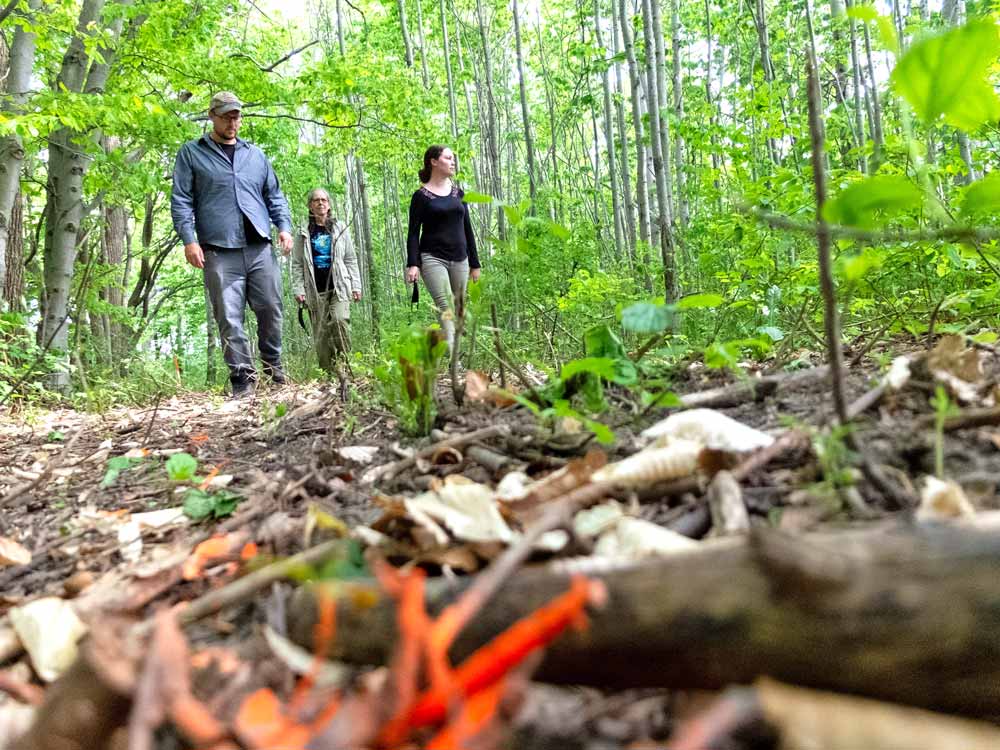 “When we were made aware of the issues by Mr. McDonald, we took immediate steps to stop the works being done in that area and start discussions to address his concerns,” McLaughlin said in an emailed response before saying no further comment could be made.

Earlier in May, McDonald’s mother, Brenda, a status Indigenous person with the Wabanaki, feeling other options had been exhausted and worried about more trees being cut down – took to social media to spread awareness about what had happened.

“I think we all kind of just wanted to let the community know,” McDonald said.

“It kind of gave mom and Katie both peace of mind of knowing that there are people out there who also know about it.”

As of publishing, Brenda’s post on the “Erin community talk” Facebook group has been shared 45 times and received 360 comments, including those from Erin councillor Rob Smith.

Contacted by the Advertiser, Smith said within an hour of seeing the post on Facebook, he had reached out to Erin’s CAO.

“From what I understand, it’s trying to be worked out between Thomasfield Homes and the landowner, so it’s more or less a civil dispute right now,” Smith said, adding he didn’t believe there was any dispute from Thomasfield Homes about crossing onto someone else’s property.

When asked if town staff would be stepping foot on the ground to determine where the boundary line actually lies, Smith said, “that’s happening in the background, for sure.”

Erin senior communications staffer Lavina Dixit confirmed the town reached out to Thomasfield on May 27.

“I think they acknowledged they had made some errors in what they did,” Dixit said. She confirmed town planning staff had visited the property and spoken with both parties, determining the situation was a civil dispute, outside of the town’s jurisdiction.

“We are looking at the options as to see if there was actually any kind of breach, that any part of the application was not followed to the tee, we are looking at that before anything else; the town cannot really do anything more than that,” Dixit said.

Wellington County planning and environment manager Meagan Ferris stated in an email that staff are working to determine if the removal of trees had violated any bylaws.

“That’s all I can offer at this time,” her response read.

McDonald also contacted Wellington OPP officials, who on preliminary investigation determined the matter was a civil dispute, according to media staffer Kirk MacDonald.

Environment and Climate Change Canada spokesperson Samantha Bayard also confirmed in an email to the Advertiser that the ministry’s Wildlife Enforcement Directorate currently has an active investigation open into the clearing of the forested area “in an effort to protect migratory birds, their nests and eggs.”

While McDonald hopes to remediate the land, he acknowledges it likely won’t be seen in his lifetime and hopes in the meantime, home developers will think twice before encroaching on neighbouring property.

“I just want to make sure that they’re not running the wild west over here, and that somebody is holding them accountable to the conditions that was all agreed to,” he remarked.

“It was a natural spot that’s been at the end of the day desecrated and it’s gone, but I’m hoping, and I don’t want to give up hope on it — I do want to be able to try and bring it back to the state that it was,” he said.