The County of Wellington Library has announced the winners and runners-up of the second annual Olive and Fred Robins Junior Short Story Contest. It is open to Wellington County students attending Grades 4 to 6, who are invited to submit original short stories between 500 and 750 words.

“We would like to thank everyone who submitted stories to this year’s contest for their enthusiasm and creativity. We enjoyed reading every one,” library officials state.

Heidi Smits is one of two 2019 top prize winners. 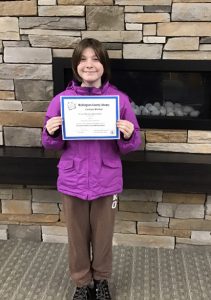 Katie bounced on the balls of her feet, waiting for her name to be called. She wanted to be accepted into astronaut training. It had been her life goal and so far there was no doubt in her mind, she would be accepted. The last name was called but it wasn’t hers. Her colleagues, congratulated each other. Katie called over her teacher.

“I think they forgot me?”

Her teacher shook his head.

“Katie, this was no mistake. I’m sorry, you don’t have what it takes to be an astronaut.”

After months, she finally decided to follow her second childhood dream, being a detective. Even though everything was alright in the end, Katie never forgot her first dream.

The news was buzzing; the first humans had now lived on Mars for a week. As she pulled into her driveway, Katie saw a black car parked there. Katie crept out carefully. Suspicious, she opened the door to her house. Katie could have sworn she locked it, but it swung open. She crept around to the living room and froze. There was a man and woman standing there. The woman asked,

“Are you Katie Duke?”

“There’s been an incident. We require your assistance. You’ll receive more information once we arrive at the launch bay.”

Katie’s eyes went wide. Who were these people? The launch bay? And more importantly, what kind of incident?

They herded her towards the car before Katie could protest. The car had a darkly tinted partition. She jumped when the partition rolled down. The woman turned,

“We were going to tell you about this incident when we arrived, but we don’t have time to spare, so we’ll tell you now. A few hours ago, we got a message from Homestead 309. The message said that two astronauts had gone missing. They had tried to radio them to no avail. We couldn’t find anything on them either. We’re sending you to the homestead to investigate.

You’re the only detective in the area with knowledge of space. You’ll have training at the homestead.”

The car stopped and they led Katie to a large building. Katie’s eyes were giant before she saw the space shuttle.

“You don’t expect me to pilot that thing?”

“Of course not, we’re sending you with two astronauts.”

Katie sighed, relieved. The next hour was spent learning about space travel. Before she knew it, she was prepped and in the space shuttle. She briefly met the two astronauts and she watched as they checked things off their checklists and pressed certain buttons. She must have passed out, because when she opened her eyes, she was in a bed. She sat up and saw a small window. Katie was ecstatic when she realized she was floating. She pushed off from her bed and looked out at the rocky terrain of Mars. Another girl floated over.

“So what’s been happening?”

“First it was Sarah. She went out to collect a sample and never came back. We tried everything to find her. Then Adam, he went missing while searching for Sarah. We got a message from him right before he went dark. The message said “Guys I found Sarah, wait-” and then he disappeared.”

She’d never had a case this big. Natalie went to her bunk and got two photos. She gave Katie the pictures.

The first photo was of Adam, he looked around forty. The other photo was of Sarah. She looked about thirty. Katie started asking her detective questions,

“Do you know if any of them had a mental illness, abusive childhood or reasons to leave?”

“Sarah and Adam never really talked about that, but they seemed fine?”

Suddenly an alarm started to ring.

“We each have identification cards that open the front doors. We all know not to try and open the door without the cards. That alarm means that something unauthorized is trying to open the door.”’

Natalie rushed out and Katie followed her. They pushed through several hallways until they arrived at a giant door. There were windows on either side, they each rushed to one. What Katie saw was terrifying. The thing had bulging eyes, shriveled skin and the remains of a space suit. It looked like a mummy. Katie realized,

The thing was Adam.

Watch for other top entries in future issues of the Wellington Advertiser.