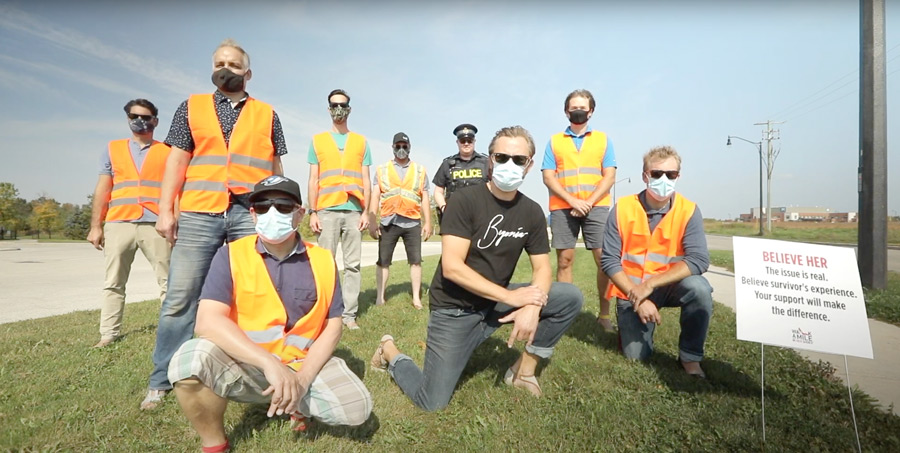 CENTRE WELLINGTON – On Sept. 27, a group of 10 men from Centre Wellington marched in high heels to protest rape, sexual assault and gender-based violence as part of the international Walk a Mile in Her Shoes movement.

Walk a Mile in her Shoes seeks to involve men and boys as active allies in preventing and combatting gender-based violence in their communities by challenging toxic masculinity, rape culture and victim-blaming comments.

While this event could not take place with full participation due to COVID-19 gathering restrictions, organizers and participants created a short video filmed by Paul Borkwood to help highlight the importance of the event and to raise awareness about sexual assault, domestic violence and human trafficking.

“As a male educator … I feel it is imperative that we model modes of behaving that both protect from gender-based violence and empowers us all to make informed, consent clear actions,” said Christopher Jess, director and lead organizer of the event.

Video filming took place at the OPP detachment in Aboyne and included a range of powerful speakers, men walking a mile in high-heels to show their support and pledging to take an active role in ending gender-based violence.

All funds raised were directed to the White Ribbon Campaign and to the Guelph Wellington Women in Crisis.

A video of the walk can be viewed at www.youtube.com/watch?v=_WP7XrzCaXc.