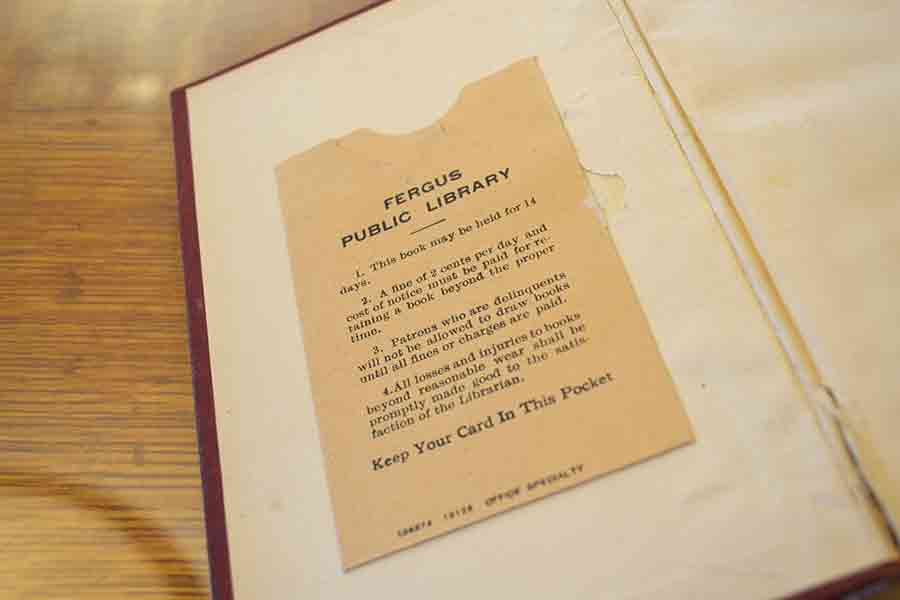 Long overdue - The Fergus Public Library was abuzz earlier this week after discovering a book more than a century old in the return bin. Photos by Joanne Shuttleworth

FERGUS – The Fergus Public Library was abuzz earlier this week after discovering a book more than a century old in the return bin.

“A woman told staff she was returning something that was quite old that she had found in her mother-in-law’s belongings,” Rebecca Hine, chief librarian, said in a phone interview Nov. 20. “Three days later they discovered the book. We had no idea it would be this old.”

Because of COVID-19, returned items are “quarantined” for 72 hours before staff can handle them, Hine said, explaining the delay.

The book is a copy of Charles Dickens’ Martin Chhuzzlewit, a novel that was originally serialised between 1842 and 1844.

Hines said the book contains two clues about when it might have been checked out.

Inside the cover, there’s an envelope with the Fergus Public Library stamp.

The original library in Fergus was actually called the Farmers’ and Mechanics’ Institute and for a $1 membership fee, people could borrow books. Books in the collection were mainly donated by early Scottish settlers in the area.

The Fergus Public Library was formed in 1895 and was amalgamated into the Wellington County library system in 1999.

The stamp also says that fines for overdue books is two cents per day.

“I did some Google research and learned that type of fine applied in the 1940s and ‘50s. So I’m guessing the book was checked out then,” Hine said.

The book is in poor condition, so it doesn’t have any monetary value. But it will be placed in the library’s showcase along with a collection of books from the original library.

“In my experience, this is the first time something this old has been returned,” Hine said. “It’s a pretty cool story.”