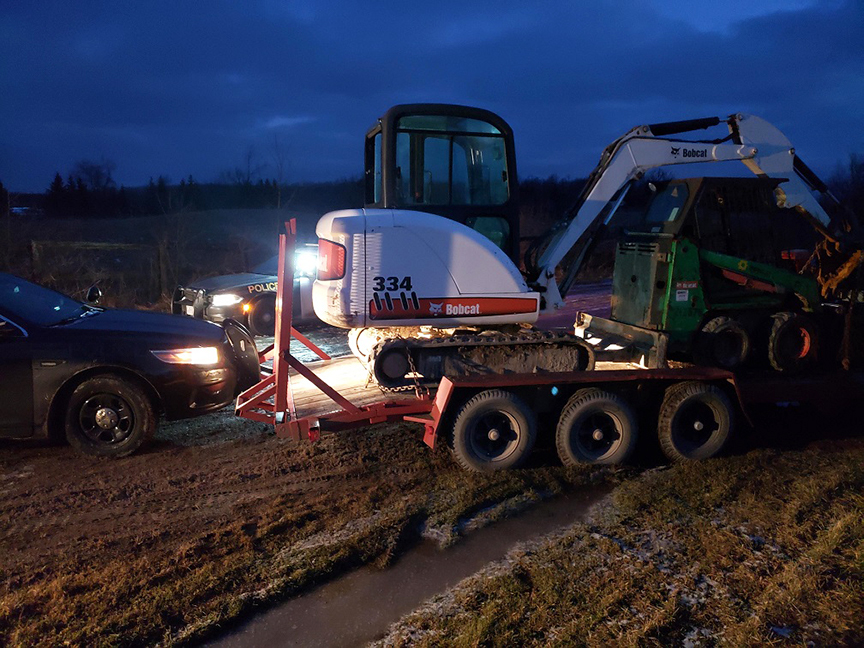 A Haldiman County man faces numerous charges after police had to physically remove a suspect from a stolen vehicle that had rammed a cruiser with a trailer in Puslinch on Jan. 15. Police say the mini excavator and skid steer were also stolen.
West Region OPP Twitter photo

PUSLINCH – A Haldimand County man faces numerous charges after police had to physically remove a suspect from a stolen vehicle that had rammed a cruiser with a trailer.

On Jan. 15 at about 6am, Wellington County OPP responded to a report of a stolen vehicle being tracked via GPS in the area of Concession 11, near Wellington Road 34 in Puslinch Township.

Police tracked a white pickup truck reported stolen from Haldimand County to a horse track compound in the area.

OPP officials say officers located a man standing next to the vehicle and trailer, which was loaded with a mini excavator and a skid steer that were also reported stolen.

“When officers approached, the suspect re-entered the vehicle and attempted to flee,” police stated in a press release.

“When the suspect became cornered, [he] reversed the trailer into a cruiser causing significant damages. Officers were able to gain physical control of the suspect and remove [him] from the vehicle.”

Police say a search uncovered a quantity of methamphetamine and stolen property, including electronics and car rims.

Police say a number of stolen items have not been returned to the rightful owner and are asking anyone with information to contact the Wellington County OPP at 1-888-310-1122. To remain anonymous, call Crime Stoppers at 1-800-222-8477 (TIPS) or submit a tip on-line at www.csgw.tips.