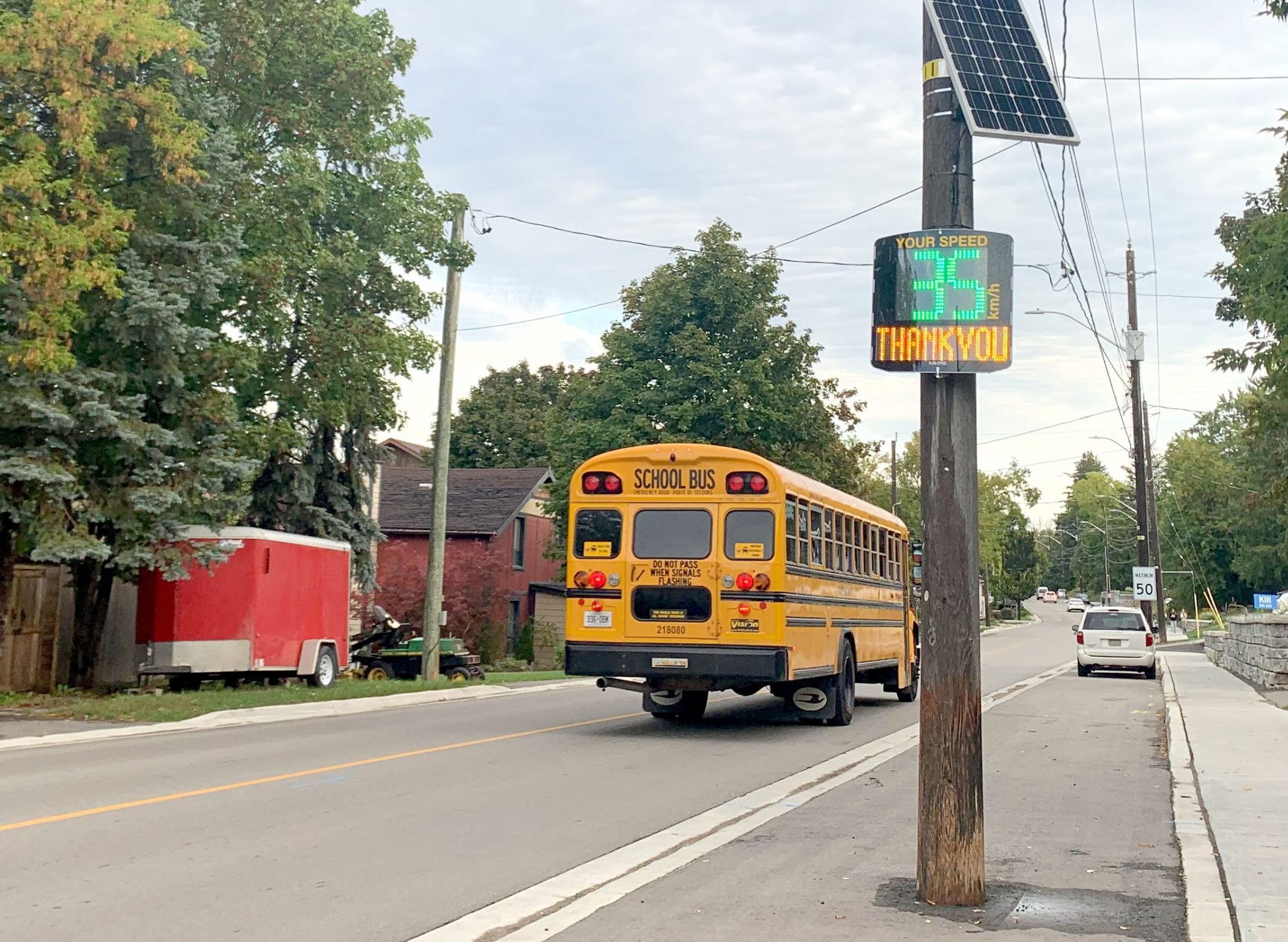 A bus going by on Harris Street in Rockwood where the township has placed a radar speed sign following increased traffic due to the Main Street (Highway 7) closure. Photo by Paige Peacock

Sitting as the committee of the whole on Sept. 15, Guelph/Eramosa councillors and staff deliberated possible options to help reduce traffic concerns within the township.

The motion, brought forward by councillor Mark Bouwmeester, asks council to direct staff to investigate reducing speed limits in residential subdivisions and prepare a report to council that includes:

Bouwmeester noted speeding on residential roads continues to be a great concern, adding “there’s no shortage of complaints.”

He said throughout Rockwood he sees residents taking it upon themselves to place signs on their lawns that read “slow down.”

“These are residents taking the initiative and I think maybe we can meet them with our efforts to slow traffic down,” he explained.

“There needs to be some indication that when you’re travelling in certain areas, whether it be a residential subdivision or a school zones, that highlights the need to slow down and it alerts drivers to pay even closer attention.”

While the rest of council generally agreed with Bouwmeester that speeding is an ongoing issue, they raised about the township’s authority to fully address the issue.

“We make this the posted speed limit but it’s the OPP that actually enforces it.”

Woods added it’s difficult to determine what the actual solution is.

“Is it a blanket [limit] of 40km an hour? Is it through all subdivisions? What is the solution?” he asked.

“You can’t legislate against stupidity. If people want to drive fast, they’re going to drive fast,” he noted. “What can we do to influence driving behaviour?”

Mayor Chris White recommended the committee turn the issue over to staff to investigate and develop a report.

“We need to do a stronger analysis of what we can do in specific circumstances,” White said.

“There’s a lot here and I’m just suggesting that I wouldn’t mind giving this to staff, let them muse over (the) motion and come back next meeting and give us an idea of what their plan might be.”

White continued, “We understand there’s a concern, there’s a problem here. Of course, a lot of it is driver behaviour.”

He noted staff should include the police in discussions about possible solutions.

“I think as part of the conversation we want to include agencies like the OPP because they’re an integral part of what we’re going to do here,” said White.

“You’re talking about people’s driving behaviour, very difficult to control. This isn’t a one size fits all so we’re going to have to look at each situation.”

White noted the current system works pretty well, but the township does have a couple focus points it needs to review.

“We need to be careful here that whatever we do we don’t create more problems than we solve, we’ve got to be methodical about this,” he said.

“We’ve got to take our time and the idea here is to make the township safer for pedestrians and motorists and everybody.

The committee directed staff to investigate potential measures to address the issues raised.

Staff has until Dec. 31 to develop a report.

“We’re not looking for an answer today,” White concluded. “We’re looking for a roadmap to deal with the traffic issues.”