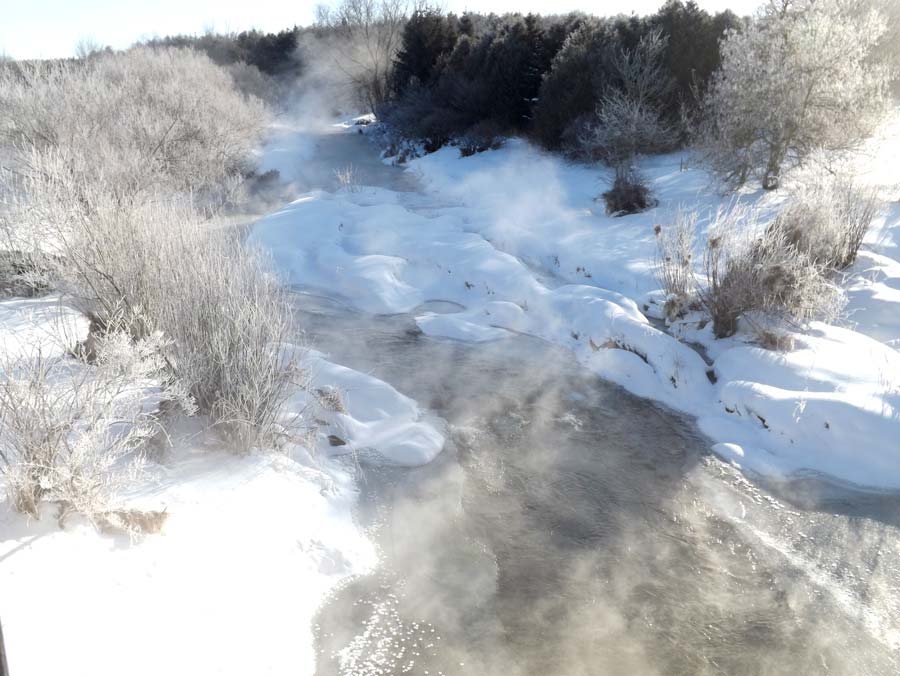 Steaming cold - Steam rises off a stream near Moorefield on Feb. 14. Relatively mild temperatures early in 2020 have left most major local waterways open with limited ice cover, notes the Grand River Conservation Authority. However, cooler temperatures and near-normal precipitation in February has helped rebuild much of the snowpack across the watershed and the authority is calling the risk of spring flooding moderate to high.
Photo by Patrick Raftis

CAMBRIDGE – The overall flood risk in the Grand River watershed this spring is moderate to high, with the highest potential risk for flooding along the Lake Erie shoreline due to current lake levels.

The meeting is one of a series held each year, as the GRCA works closely with municipal officials to operate, test and improve the flood warning system.

The GRCA has the responsibility of monitoring weather and river conditions and issuing flood warning messages to municipal flood coordinators.

The authority notes the winter to-date has been relatively mild with January and February temperatures approximately one to three degrees above normal leaving most major local waterways open with limited ice cover.

“Ground conditions remain saturated and frozen across northern portions of the watershed which will make it more reactive during rapid melt events,” explained Shifflett.

“GRCA reservoirs are at their normal operating level for this time of year and conditions will be monitored closely as we head into spring. Residents who typically experience spring flooding should ensure they are prepared due to the elevated risk this year.”

Environment Canada is predicting warmer than normal temperatures for the watershed over the next three months and above normal precipitation.

Watercourses are generally free of ice, with the exception of some reaches in the northern part of the watershed.

Major reservoirs are at their normal levels for this time of year. The reservoirs were actively used to manage runoff during record rainfall flooding in January.

The normal filling cycle of the reservoirs will start in the next few weeks. During the filling cycle, reservoirs are operated to capture water and reduce downstream flooding through the spring.

The water in the reservoirs is then released gradually during the summer and fall, augmenting the flow in the river to ensure there is enough water to meet the needs of downstream municipalities.

Lake Erie remains well above the long-term average and above record levels for this time of year, the GRCA states. The lake is virtually free of ice, including the mouth of the Grand River reducing the risk of ice jam-elated flooding.

There is a very high risk for continued flooding and erosion along the Lake Erie shoreline due to the high lake level and open water conditions, the authority cautions.