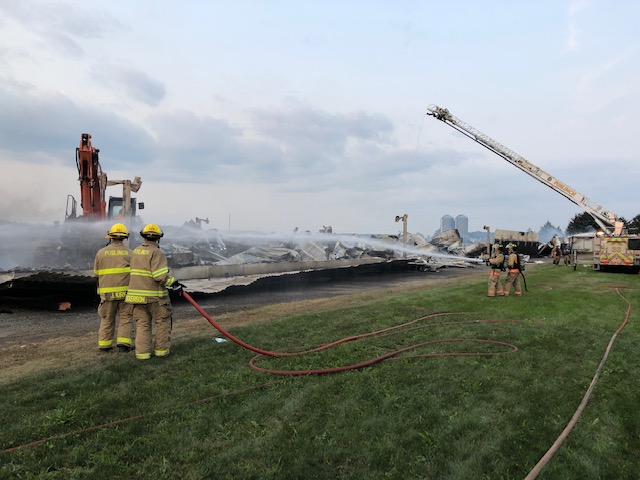 Puslinch Fire and Rescue Services, along with four other fire departments, responded to a barn fire here on Aug. 20. Submitted photo

Puslinch Fire and Rescue Services responded to a structure fire call on Wellington Road 32 just before 5pm on Friday. The call came in at approximately 4:30pm.

Bigrigg said between 15 to 20 firefighters from the Puslinch department responded to the call.

“We were short so we had to request assistance but Rockwood gets dispatched with us so they come with us,” he added.

In addition to the Guelph/Eramosa Fire Department, which brought about ten firefighters, Bigrigg explained, they also received assistance from the Guelph, Cambridge and Hamilton departments.

The structure was approximately 400 feet long by 60 feet wide. The barn was used for housing chickens, but Bigrigg said no animals or people were inside at the time.

“The barn was vacant. They had brought the last bunch of chickens out and they were in the process of just doing the regular cleaning and maintenance on the barn so the loss was the building itself.”

He added one firefighter was treated at the scene for heat exhaustion.

As of Aug. 22, Bigrigg said they have yet to determine what caused the fire but the damage is estimated at $1.1 million.

“We have a couple of possible causes, all of which are accidental, nothing suspicious,” he explained, adding “we’re just down to two potential causes.

“The insurance company was on scene, they were quite quick to get there so I would expect that they will pursue replacement.”

He noted there were two other barns on scene that they were able to ensure did not catch fire, which were both of similar design and value.

The area wasn’t cleared until 10:30pm but Bigrigg explained they left a truck on scene until 1:30am the following morning to be sure. The contents were left inside the cement base of the structure to burn out.

Bigrigg added he wants to remind people of the importance of calling 911 right away when seeing a fire and to also thank neighbouring fire departments for making their equipment and firefighters available.