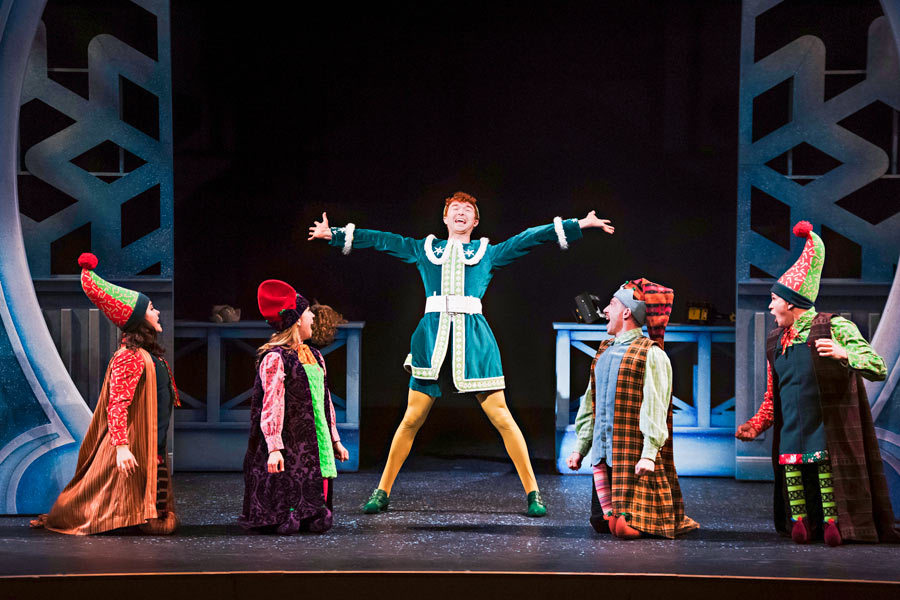 Holiday cheer - Elf: The Musical, now on stage at Hamilton Family Theatre Cambridge, has been extended to Jan. 5.
Photo by Hilary Gauld Camilleri

CAMBRIDGE – Son of a nutcracker! Elf: The Musical has been extended again by popular demand.

The production was initially intended to close on Dec. 22, but with brisk advance sales, the run was extended through Dec. 29 earlier this fall.

Seven performances of Elf: The Musical have been added to the schedule during the first week of January while students are still off on holidays.

Tickets are on sale now for these new performances at the Hamilton Family Theatre Cambridge.

“We are thrilled that audiences are so excited to see the live stage version of Elf: The Musical,” said Alex Mustakas, artistic director of Drayton Entertainment.

“We know that families are always looking for special things to do with loved ones over the holiday break.

“By extending the run, more people will be able to create lasting memories and enjoy this fun-filled production.”

Based on the popular 2003 New Line Cinema film, Elf: The Musical follows the fish-out-of-water tale of Buddy, an infant discovered at Santa’s workshop, who is raised to adulthood by the elves. Unaware that he is actually human, his enormous size and poor toy-making abilities make him wonder if he is actually an elf.

With Santa’s blessing, Buddy travels to New York City to find his birth father and discover his true identity. Faced with the harsh realities that his dear old dad is on the naughty list, and his half-brother doesn’t even believe in Santa, Buddy is determined to win over his new family and help everyone remember the true meaning of Christmas.

Regular performance tickets are $48 for adults and $29 for youth under 20 years of age. Tickets for select discount dates and groups of 20 or more are $39. HST is applicable to all ticket prices.

With many dates already sold out, the additional performances of Elf: The Musical are guaranteed to sell very quickly.