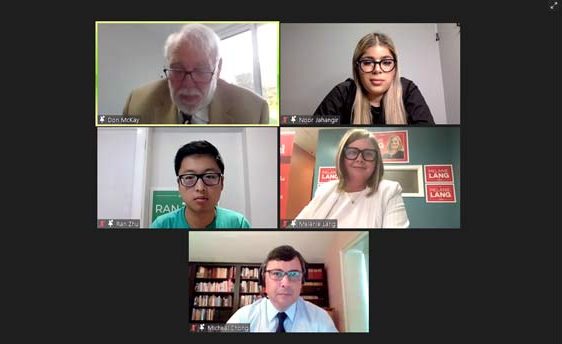 Screen shot of the Wellington-Halton Hills debate on Sept. 15, hosted by South Wellington Lions Club and Optimist Club of Puslinch.

PUSLINCH – Wellington-Halton Hills candidates were a little feisty at the debate hosted by the Optimist Club of Puslinch and the South Wellington Community Lions Club on Sept. 15, although overall the debate was respectful and orderly.

And rather than posing questions to candidates that had been vetted by the hosting organization, like the debate hosted last week by the Centre Wellington and Halton Hills chambers of commerce, for this one those in attendance could directly ask their questions.

NDP candidate Noor Jahangir was also present at this debate – she did not attend the debates hosted by the two chambers or by the Ontario Federation of Agriculture – but People’s Party of Canada candidate Syl Carle was absent.

The first question was directed to Chong.

“How can you run with a party that can’t agree that climate change is real?” the caller asked, referring to the Conservative Party’s policy convention in June, when 54 per cent of delegates rejected adding the phrases “climate change is real” and that the party “is willing to act” into its policy book.

Chong noted he had recently been endorsed by David Suzuki and GreenPAC for his environmental leadership.

“You’ve got my commitment we’ll take serious action on climate change,” Chong said, adding the party will work with Alberta, the U.S. and the E.U. “to set a price on carbon and ensure we don’t transfer jobs to China where they don’t have an environmental plan.”

Liberal candidate Melanie Lang said climate change should not be a partisan issue, “but our party in its entirety agrees it is a priority.”

Zhu acknowledged Chong’s personal history of environmental action, but noted the gap between Chong’s own actions and his party’s.

“And your carbon pricing plan is significantly lower than the other main parties.”

Jahangir turned the climate question around to Lang.

“Mr. Trudeau declared a climate emergency and then approved pipelines,” she said.

“The Conservatives don’t believe it’s real and the Liberals don’t act like it’s real. The NDP plans to fight climate change because there is a climate emergency. The NDP will undo the Liberal decision to let polluters off the hook.”

“The NDP did support the gas pipeline,” Zhu countered.

Lang said the Liberals approved the pipeline because transporting oil by rail “is very dangerous.”

She added, “The pipeline doesn’t increase production of oil and it could move us away from selling to the U.S. This is good for Canadians.”

Chong said both the Liberals and the Conservatives, when they were in power, share the blame on not meeting climate commitments.

“We are not on track to meet Paris (the Paris Accord). We have to get serious and I am committed to do that,” he said.

A number of questions were asked that led to discussion of hate crimes, racism, discrimination and the extra challenge women find in running for office.

Within the context of Canada-China relations, Chong said Canada has to stand up to China while at the same time not allow Asian-Canadians to become targets of hate and racism.

“I’m of Asian descent and I know what it’s like to be targeted,” Chong said.

Zhu said Canada needs to take a “nuanced” approach to China and the Green Party would look closely at the Employment Equity Act when it comes to racism at home.

Noor said the NDP has a “strong, principled foreign policy and a strong strategy with China … The NDP will call out human rights violations.”

Lang was asked about her election signs being vandalized and how this affects women running for political office.

“I was disappointed with the scale of the vandalism,” Lang said, adding she also received misogynist messages on the campaign trail.

“We need more women in politics. We need to create allies that cross parties.”

Jahangir agreed, adding that her mother, Aisha Jahangir, who is the NDP candidate in Guelph, also had signs vandalized.

“It’s so important for us as women to be part of the system. We need to stand together,” she said.

Candidates were asked for their thoughts on mandatory vaccinations and vaccination passports, with one pointed question asking what each candidate would do to remove vaccine passports.

Chong said while he encourages people to get the vaccine, “we need to respect choice on healthcare.” He said employees who are not vaccinated should be allowed to stay on the job if they have rapid tests to prove they are not COVID-positive.

“Any other approach is overly intrusive,” he said.

“I support vaccine passports,” Lang said. “It’s important that we turn to science and the medical community on this.”

Zhu said that while he and his team are all vaccinated, “I support education over mandatory vaccines.”

On Indigenous matters, all candidates said they are committed to acting on the Truth and Reconciliation recommendations, though Jahangir tossed the blame ball in Lang’s court.

“The Liberals have failed Indigenous people time and time again. They talk of reconciliation yet fight First Nations kids in court,” she said.

Zhu offered a land acknowledgement when the question came to him, adding the Green Party “embraces all 46 articles on the United Nations Rights of Indigenous People” including healing centres, missing and unmarked graves of residential school children, request that the Pope apologize and end the legal fight.

Lang noted the government has lifted more than 100 boil water advisories and that work, paused because of the pandemic, has started up again.

She added the Liberals passed Bill C-15, the United Nations Declaration on the Rights of Indigenous Peoples Act, but the Conservatives, including Chong, voted against it.

Chong said the Conservatives would make amends for past injustices and work with Indigenous people across the country to ensure the recommendations were met.

But the bill gave veto power over natural resource projects to Indigenous tribes and bands and that was the sticking point for him.

“My concerns are related to consent and sovereignty,” he said. “UNDRIP was opposed by Paul Martin for the same reason.”

The virtual debate was moderated by county councillor Don McKay of Puslinch, who said at the outset 33 people attended, although more may have joined over the course of the two-hour debate.