ERIN – Two Erin air cadets have received flying scholarships from the Air Cadet League of Canada in conjunction with the Department of National Defence.

Flight Sergeant Jacob Dutto and Flight Sergeant David Crook will undertake intensive training this summer learning how to navigate, operate and fly solo in their aircraft.

These cadets from Royal Canadian Air Cadet Squadron 242 were chosen based on merit through an extensive evaluation process where they were graded against all other applicants in Ontario.

They voluntarily attended ground school classes for at least a year in advance of their application process, and then wrote a qualifying exam in order to be considered.

Once they had passed the exam, they participated in a panel interview, wrote a narrative to explain their desire to complete their pilot training and had their volunteer activities and school performance evaluated.

Flight Sergeant Jacob Dutto has been a squadron member since January 2015.  He joined in order to pursue his dream of one day becoming a qualified pilot, following in the footsteps of both his mother and father. 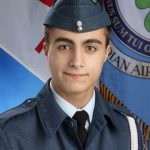 This summer he will complete the training to become a qualified glider pilot.  Previously, he  completed his Basic Aviation Course at Trenton Cadet Training Centre, in the summer of 2016.

In his free time, Flight Sergeant Dutto takes lessons to learn to play the piano, performs as part of his high school Jazz band, and is a member of his school rowing team.

Flight Sergeant David Crook has been a squadron member since March 2015.  He joined on the recommendation of his father who had previous experience as an Air Cadet. 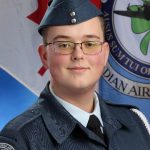 This summer he will complete the training to become a qualified private pilot.

He also entered and won first place in the Erin Optimists Club Essay Writing Competition for 2019.

Once Flight Sergeants Dutto and Crook receive their licenses, they will be encouraged to return to 242 Squadron to participate in flying familiarization with other squadron cadets by taking them up for a flight.

They will also assist with Ground School and aviation-related training for other cadets from their unit and may be hired to work at one of the Air Cadet Gliding Centres in the area.

Uniforms are supplied free of charge.  While the program is military based, there is no obligation for a cadet to join the Canadian Armed Forces when he or she finishes their cadet career.  Cadets are also encouraged to learn more about opportunities within Canada’s aviation industry.