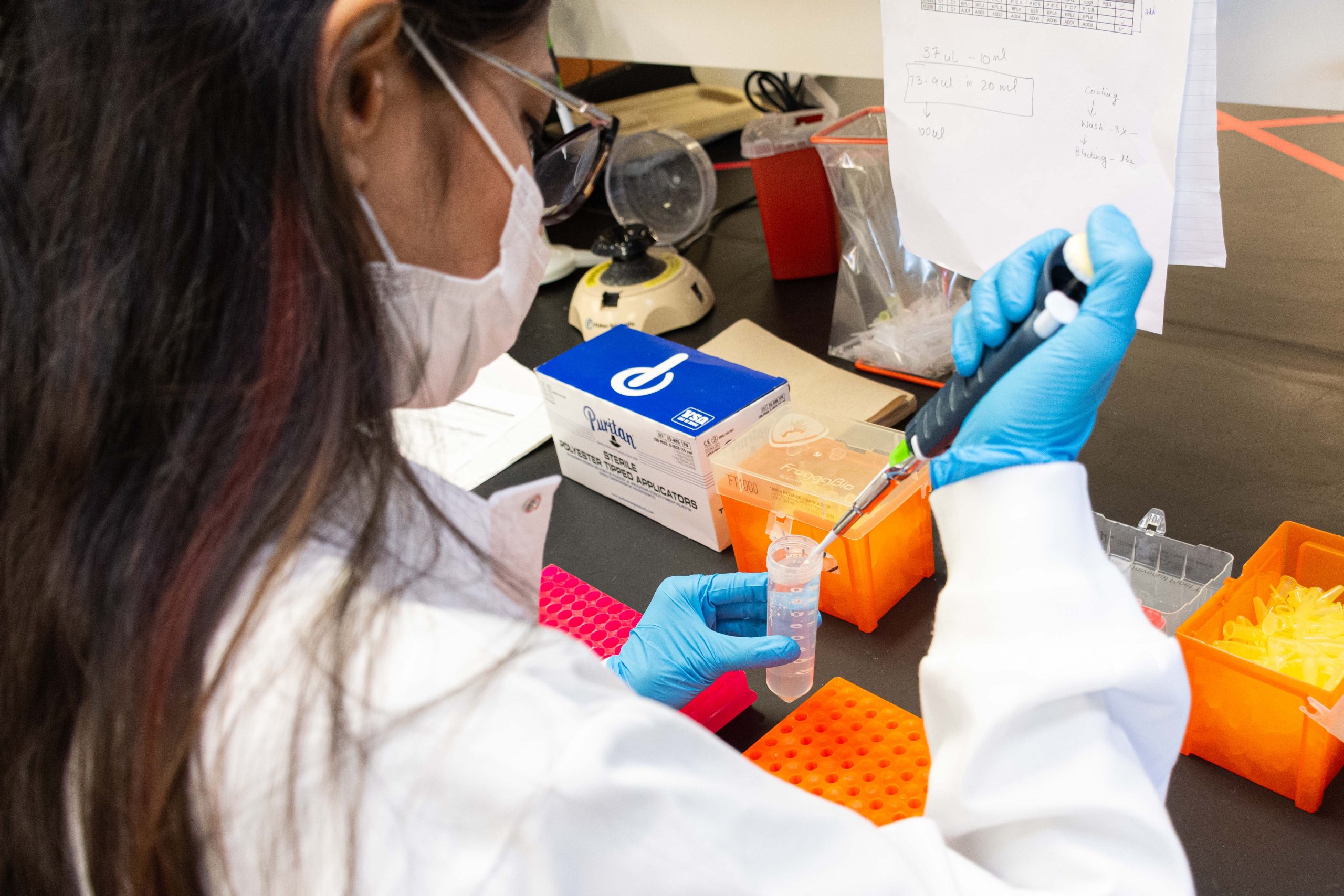 At the University of Guelph’s Ontario Veterinary College, students and scientists within the department of pathobiology are working to better understand avian influenza and its implications. The Canadian Food Inspection Agency has confirmed three outbreaks of H5N1, a highly pathogenic strain of bird flu, in Wellington County flocks. Sugandha Raj is seen in this photo conducting research at the Sharif Lab to model the transmission of H9N2, a low-pathogenic strain of avian influenza, among chickens. (Photo by Jordan Snobelen)

GUELPH – Another outbreak of avian influenza has been confirmed in Wellington County.

On May 4, the Canadian Food Inspection Agency (CFIA) publicly confirmed an outbreak of a highly aggressive strain of avian flu, known as H5N1, in a small flock including chickens, turkeys, pheasants and ducks.

The CFIA would not disclose where the outbreak is located within the county, despite noting specific municipalities in previous reports. A CFIA spokesperson also was unable to answer a question about how many birds are affected in the county. 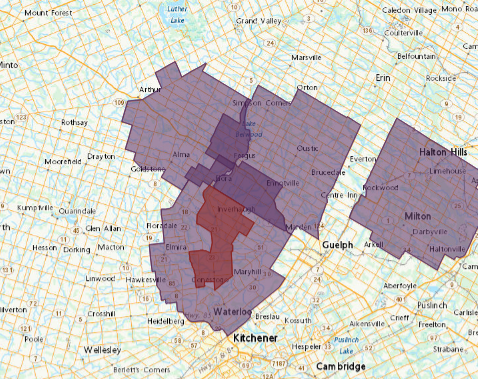 The May 4 outbreak is the third such outbreak within the county since H5N1 was first confirmed in a commercial turkey flock in Guelph/Eramosa, reported on March 27, and later in ducks in Centre Wellington, reported on April 4.

In response to 85 outbreaks in Canada, of which 26 are in Ontario as of May 19, federal government officials have taken steps to mitigate spread by implementing zones intending to control or restrict the movement of birds.

Outbreaks in Canada were first discovered in December at five locations in Newfoundland and Labrador.

Federal agriculture minister Marie-Claude Bibeau has called 2022 an “unprecedented year” for the virus.

At the University of Guelph’s Ontario Veterinary College, students and scientists within the department of pathobiology are working to better understand avian influenza and its implications.

Also known as bird flu, the type ‘A’ flu virus infects the respiratory tracts of many types of birds, both domesticated and wild. Before being identified as an avian form of the flu in 1955, incidents of mass bird illnesses and deaths in the 19th and 20th centuries were referred to as “fowl plague.”

Because it’s a zoonotic virus, it can also be passed from birds to humans — through breathing virus droplets in the air or dust, or by touching contaminated surfaces with infected bird mucous, saliva or feces and then touching the eyes, mouth or nose — creating the risk for another global health pandemic. 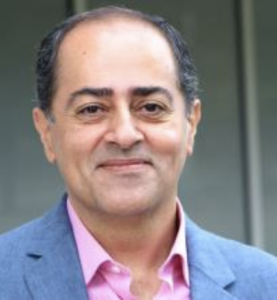 “Our concern in the scientific community, in avian influenza communities, is that this virus has the capacity to kill,” said University of Guelph professor and immunologist Shayan Sharif, who has spent the past 15 years researching bird influenzas.

Although bird flu doesn’t present a food safety risk when meat is handled and cooked properly, several strains can infect humans and have caused numerous deaths across the globe – at least 1,106 since 2003, according to a review of available data from the World Health Organization (WHO).

Two subtypes – H5N1 and H7N9 – are most responsible for illness and death in humans, according to the U.S. Centres for Disease Control and Prevention (CDC).

The good news, says Sharif, is the virus “doesn’t have the capacity to infect humans in a very easy manner.”

Even better news: human-to-human transmission is extremely rare, with most cases occurring in family members following unprotected and prolonged exposure to an infected person who is also symptomatic.

As of May 13, there have been 40 confirmed avian influenza cases in humans worldwide this year, according to the WHO. Almost all cases (some were listed unknown) had close contact with birds.

In April, a four-year-old in China became critically ill after interacting with chickens and wild ducks, later testing positive for an H3N8 subtype – the first ever human case in the world.

And closer to home, a Colorado man became the first-ever human case of H5N1 avian influenza in the U.S. on April 27 after culling infected poultry.

In all of those cases, as of reporting, no close contacts had tested positive. The Colorado man only complained of fatigue before symptoms resolved three days later.

In Canada, there has been a single case of avian influenza detected in an Albertan who died from H5N1 in 2014, following travel to China.

Although there are several instances of human-to-human transmission of avian flu throughout the past 25 years, the WHO considers its pandemic potential to be low because transmission hasn’t been sustained.

But that doesn’t rule out birds as the source of the next global health crisis.

The CDC agrees human transmission is rare, but states on its website bird flu viruses “could change and gain the ability to spread easily between people.”

As stated on its website, the WHO finds the diversity of zoonotic flu viruses causing people to become sick “alarming,” and calls for strengthened pandemic preparedness planning and surveillance.

Wild birds – especially waterfowl such as ducks, geese, swans, gulls, terns, and shorebirds – are notorious reservoirs for avian influenza and resistant to its ill effects, unlike domesticated birds, which can succumb to highly-pathogenic strains within 48 hours.

As wild birds travel along migratory flyways, the virus is believed to be spread to other birds through oral and nasal secretions, and feces or direct interaction with other birds. 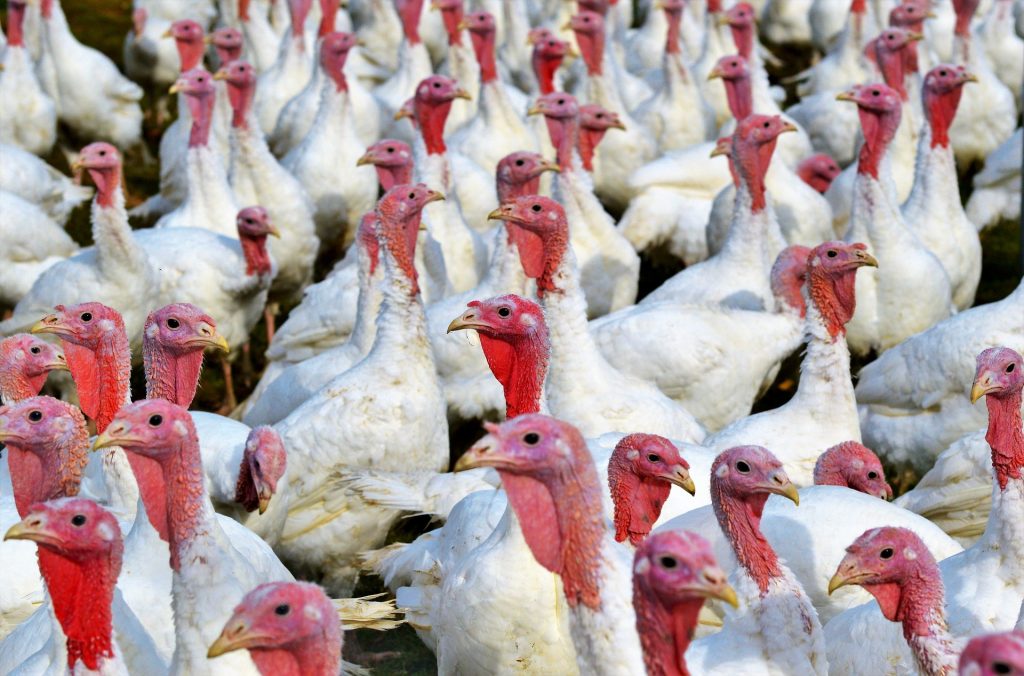 The constant circulation of influenza viruses in bird populations creates favourable conditions for the exchanging of genetic material, known as reassortment, in turn leading to more advanced viruses which could gain the ability to jump from animal to human, or from human to human.

A real-world example of reassortment can be pulled from China, where, in 1957, a combination of a pre-existing human influenza is thought to have combined with avian influenza in wild ducks to form a new influenza subtype known as H2N2. The strain quickly spread across the Atlantic, arriving in North America that same year.

A vaccine preventing numerous deaths was produced thanks to the efforts of the late Maurice Hilleman, a Walter Reed Army Medical Centre microbiologist, and the strain later disappeared from the human population in 1968.

But through further reassortment, the H2N2 subtype gave way to H3N2, responsible for another pandemic, known as the Hong Kong flu, during 1968-69.

That strain, with avian influenza genetics, remains in circulation as a human seasonal flu virus.

Together, the strains have killed upwards of one million people across the globe.

“These viruses are quite sneaky, and they’re quite good at exchanging their genetic material … so we have to be extremely cautious,” Sharif said.

If H5N1, the virus currently attacking bird populations from here to Asia, were to gain capacity for human-to-human transmission, Sharif said, “we are going to be dealing with a virus that is actually going to be quite lethal.” 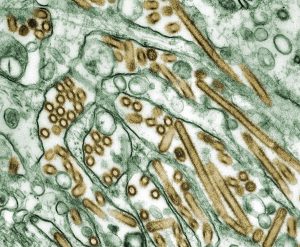 Research at Sharif’s lab focuses on developing novel vaccines and immune-based strategies to control bird flu and hopefully demonstrate a reduction of its spread.

Working under Sharif, Nitish Boodhoo, a senior scientist, and Sugandha Raj, a PhD student, are busy with a weak H9N2 strain – responsible for between 74 and 99 human infections worldwide, and at least two deaths.

Sharif said the strain was chosen because of its relevance to the poultry industry, its potential public health impact, and because it serves as a good prototype for highly pathogenic strains.

Using living chickens, Raj intentionally infects the birds with H9N2 and examines transmission to nearby healthy birds to understand how the virus spreads. 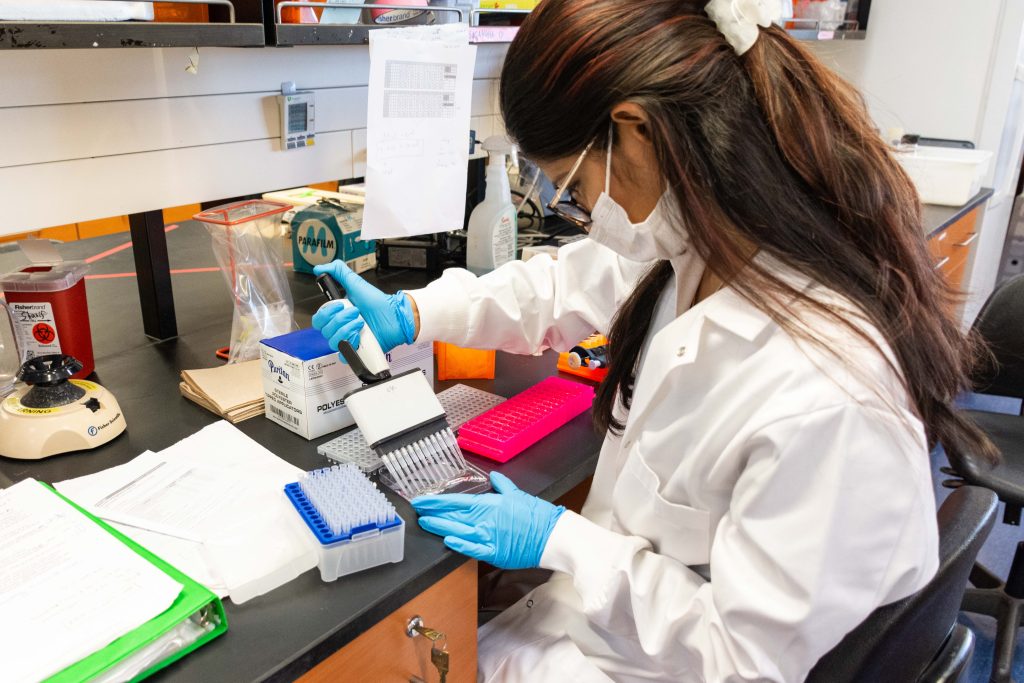 Sugandha Raj at the Sharif Lab. (Photo by Jordan Snobelen)

Modelling can be used to determine whether the virus is airborne or can be transferred on objects.

Taking oral and fecal samples, Raj also looks at how infected a bird is — the viral load.

Tissue and organ samples are also used to see how a bird’s immune system responds to influenza.

“For example, influenza virus basically replicates in the intestines and respiratory tract, but it also replicates in different organs,” Raj explained.

Once she understands how the virus spreads, the group can work on developing immune therapies. Transmission modelling can also be applied to highly pathogenic viruses in the future.

Boodhoo is working to create novel recombinant and mRNA vaccines for H9N2.

Boodhoo said the strain has “donor potential,” meaning it’s capable of giving segments of its genome to other viruses.

“If these segments are compatible, then these viruses can gain virulence,” he explained. “And this gaining virulence can allow them to jump to other species.”

Although vaccines are not used for avian influenza in Canada – the CFIA currently uses a “stamping out” policy – the researchers aren’t putting their eggs in one basket. 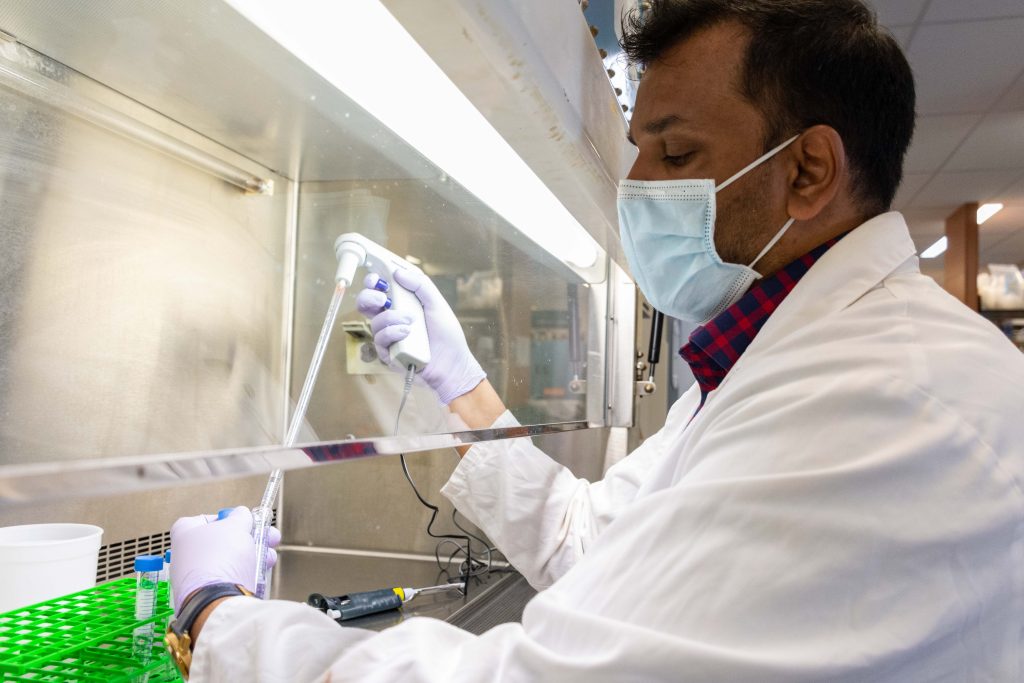 Nitish Boodhoo at the Sharif Lab. (Photo by Jordan Snobelen)

The main reason to study the strain, Boodhoo said, is to get ahead of the curve and understand if transmission can be prevented, whether by vaccination or something else.

H9N2 circulates regularly in Asia, is increasingly reported in Africa, and has made its way to Italy.

Boodhoo said it’s “slowly showing a pattern that, like H5N1, there will be an emergence in Europe.”

And thanks to migratory birds, whatever happens across the Atlantic typically appears in North America within a year or two, Boodhoo said, adding that once cases began appearing in the United States last winter, it was only a matter of time before spread occurred here.

Sharif hopes to develop a proof-of-concept for whether vaccination or other immune strategies can reduce transmission.

“We want to develop an intervention that can reduce or completely block transmission of the virus,” Sharif said. “The next phase will involve highly pathogenic viruses, such as ‘H5’ viruses.”

The last significant avian influenza outbreak in Canada occurred in Ontario in 2015, resulting in the death of upwards of 72,000 birds around Woodstock.

This round, according to the CFIA, 1.83 million birds have been culled across the country as of May 19.

The World Organization for Animal Health (OIE) suspects wild bird movements from Northwest Europe across the Atlantic have led to this year’s reintroduction of the virus to North America.

In an email to the Advertiser, OIE communications officer Elise Pierrat said as of March 31, nearly 57,000 wild birds have been killed by avian influenza – a “significant” and “unusual” amount.

“To further understand the reasons why the current epidemic wave is worse than previous years, there is a need to invest in enhanced surveillance along flyways and to include environmental data and other potential contributing factors in analyses,” Pierrat stated.

Outbreaks in Canada will not last indefinitely, but the researchers suspect there will be additional spread before the seasonal virus peters out by autumn.

“As soon as this outbreak goes away, as human beings who have very limited memory, we then forget about it and we say, ‘let’s let the next generation deal with it,’” Sharif said.

He hopes that won’t happen this time around.

“The tide is turning now, and things are changing,” he said.

It may be time for officials to consider vaccine-focused responses, Sharif suggested.

Areas with a heavy poultry production, or farms along flyways could be targeted creating a “ring of immunity.”

Behind these conversations, the immunologist said, is a need to understand how climate change, human interaction with – and encroachment on – wild animals, and animal health could lead to the sharing or “spill-over” of viruses.

Be it avian influenza or any other virus, Sharif said there cannot be an effective response until there’s a better understanding of those links.

“It’s absolutely critical to have, for our success in the future, to combat existing and future pandemics or emerging animal diseases.”