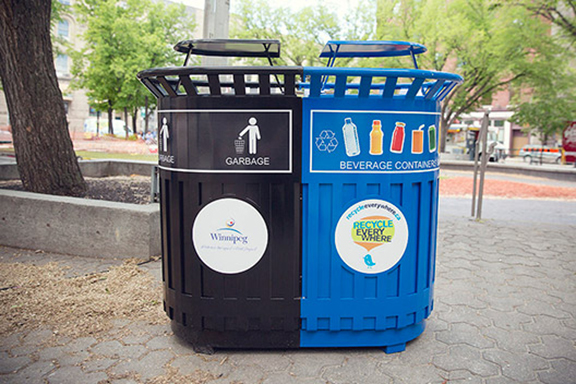 In the community - Dual stream garbage/recycling bins in use within the Town of Erin.
Submitted photo

ERIN – In its ongoing quest for environmental friendliness, the Town of Erin will stop buying and selling single-use plastic products, but it will not ban them from town facilities.

Councillors accepted a report from infrastructure director Nick Colucci and committed to working with the town’s environment and sustainability advisory committee in the coming weeks on a plan to encourage residents and businesses to reduce use of single-use plastics.

A fund of $2,000 had already been approved in the 2020 budget for an education campaign to promote alternatives.

Councillor Rob Smith questioned if the town should be spending money on such an initiative when the federal government may be moving to restrict plastics, resulting in changes to what suppliers provide.

“We’re trying to be a little ahead of the scene and do the proper thing in our own community,” replied Mayor Allan Alls, who requested the report last year.

“I am very pleased to see that we are taking another step forward to reduce our carbon footprint. I look forward to seeing the program continue to evolve with the support of the community.”

Erin staff will no longer purchase single-use plastic products for use at town facilities, and have already been in conversation with current vendors and service providers to start implementing alternatives.

Vending machines at recreation facilities now have canned beverages in place of plastic bottles for the public, and there will be changes at town concession stands.

Environmentally-friendly alternatives will be required in applicable town contracts, and new vendors will be sought if needed, said Colucci.

Sports teams and members of the public will still be allowed to bring plastic bottles containing water and other beverages into community centres.

“The program does not aim to ban single-use plastics, but through the public education campaign, we aim to promote environmentally-friendly solutions,” said communications officer Jessica Spina.

Erin staff will monitor the success of the program and report back to council in the first quarter of 2021.

Colucci’s report identified the targeted material as plastic bags, straws, coffee stirrers, soda bottles, water bottles and most food packaging, which after being used once can either be recycled or treated as garbage.

“According to the Canadian government, Canadians use 15 billion plastic bags every year and close to 57 million straws every day.”