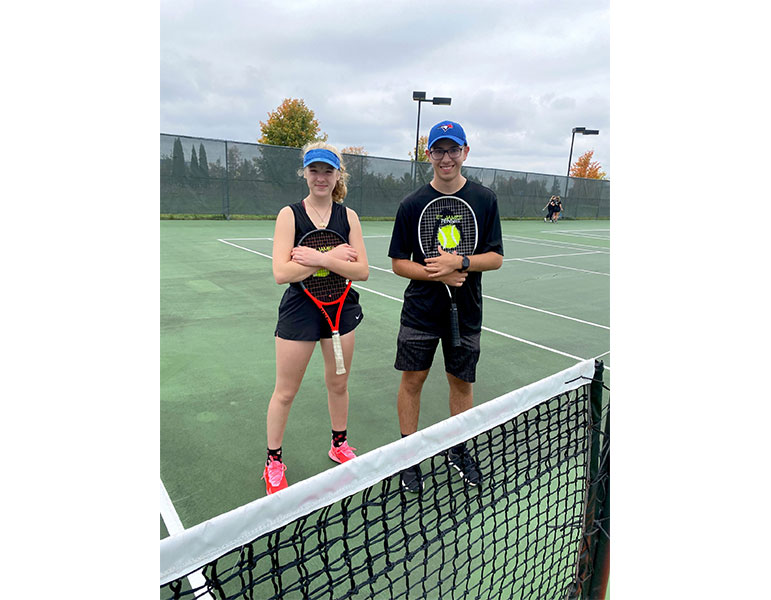 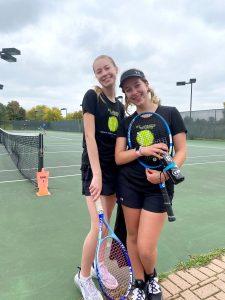 Mila, in Grade 9, but a veteran to the sport, welcomed tennis rookie Tristan to the mixed team.

The pair won all three of their matches to take the D10 title.

This being Tristan’s first year with the St. James’ team, having picked up the racket to help him keep active only four months ago, it’s safe to say that although the team is in its infancy, a promising season lies ahead.

“He was a former badminton player and picked up the sport quite quickly,” shared team coach Melissa Zaviski-Tomusiak.

“Mila is a consistent player, who has a solid forehand and excellent serves. Her expertise and calm nature, complement her partner’s high energy.”

Mila is somewhat of a legacy tennis player at St. James, Zaviski-Tomusiak explained, her sister having represented St. James at OFSAA in mixed doubles previously.

“I can potentially see this team advancing to OFSAA this year as well,” she said.

While Kaya and Olivia also won all three of their preliminary matches, a tie in the standings led them to play one final match.

Unfortunately for them, it went to their opponents: Bishop Macdonell.

“It was such a close game, it could have went to either team,” shared Zaviski-Tomusiak. “I am proud of their game play, and even though they finished second they will still advance to CWOSSA.”

Both Kaya and Olivia have played tennis for a handful of years, however, this was Olivia’s first-time representing St. James.

“Kaya has become a consistent server and great net player in her doubles game this year,” explained the coach.

“Olivia, she is a lefty, which means it is much harder to play her.

“She has a solid forehand, her serves are on point and her agility on the court is awesome. She will run any ball down.”

“Placing second felt so amazing. I have absolutely zero regrets with how we played, and I’m so proud of how grounded we were the entire day and how cohesive our strategy was,” said Olivia.

“Playing against so many incredible teams really helped improve our game, and it was just overall a really fun tournament.

“Kaya and I went into the tournament with open minds and expectations, so having that much success just felt that much more amazing.”

Back on the court

Consistent among the tennis players, was their gratefulness to be back on the court regardless of the result.

“This past year has deprived us completely from the joys of sport, and nothing feels better than to be back on the court finally playing the game we missed for so long,” said Kaya.

“The fact that I still have the ability to succeed in sports feels really great,” added Tristan.

For now, both teams have their sights set on CWOSSA in the spring of 2022, joining local clubs and completing dryland training in preparation of the matches.

“I am proud of all our team members this year,” said Zaviski-Tomusiak.

“The sportsmanship and encouragement from each player at practice and at the tournament was inspiring. I am proud to coach such a wonderful group of students.”

The teams will compete in CWOSSA in May, with the top two teams from CWOSSA advance to OFSAA at York University in June.