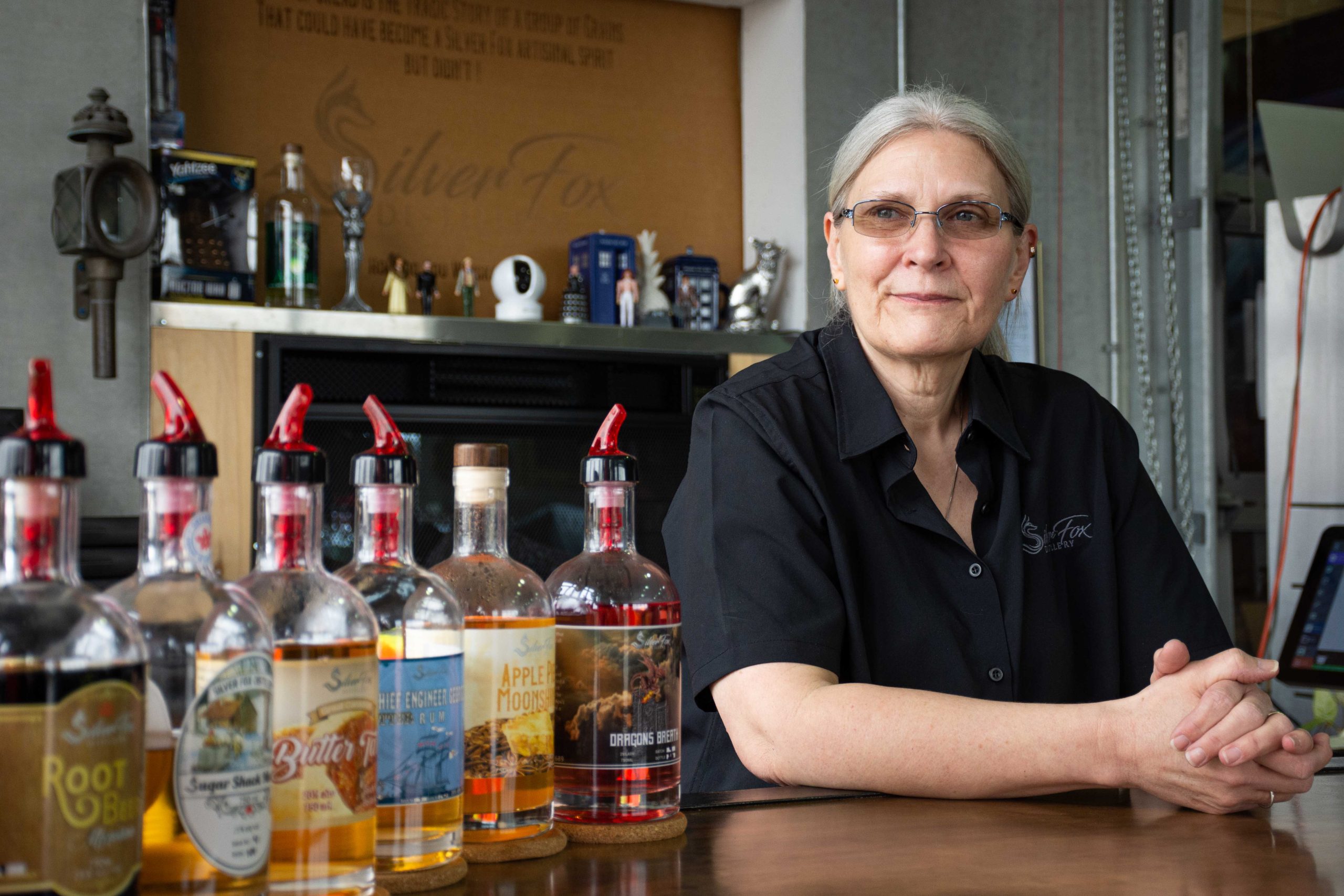 Silver Fox Distillery, owned and operated by Lisa (pictured) and Mark Townsend has been named the 2022 U.S. Open Spirits’ Grand National Champion as the recipient of six awards, including three golds. Photo by Jordan Snobelen

ARTHUR – Their grey may be showing, but Mark and Lisa Townsend have made it clear they’re at the top of their game.

Silver Fox Distillery, owned and operated by the Townsends, has been declared the 2022 U.S. Open Spirits’ Grand National Champion – the first Canadian distillery to have been bestowed with the honour in the competition’s history.

Sitting outside of a room filled with botanicals, where the magic comes together in the bottle, Lisa says she isn’t one for shedding tears.

Mark on the other hand?

Lisa recounts how it went when they discovered their Arthur distillery was named champion.

“When the results got posted … we got down to the part where we were the grand champions, and the first time in 14 years of history that a Canadian distillery had won this award, and he was literally weeping,” she said, smiling.

Silver Fox, an apt reference to the couple’s greyed hair, is a labour of love and a hopeful retirement project.

After 14 months of slogging through the marathon of bureaucracy distillers are forced to run in this province, the Townsends finally got their licensing sorted and opened at their 7999 Wellington Road 109 location in February of 2020 – just before Ontario’s first COVID-19 restrictions began.

And being new, without the “tails” or waste alcohol stocked up from past production, into the spritz bottles went their premium booze.

The couple donated a lot of hand sanitizer to first responders who showed up at the door as the first COVID wave washed over.

These days, their alcohol isn’t being used to thwart a virus. Now, it’s earning them accolades and recognition. 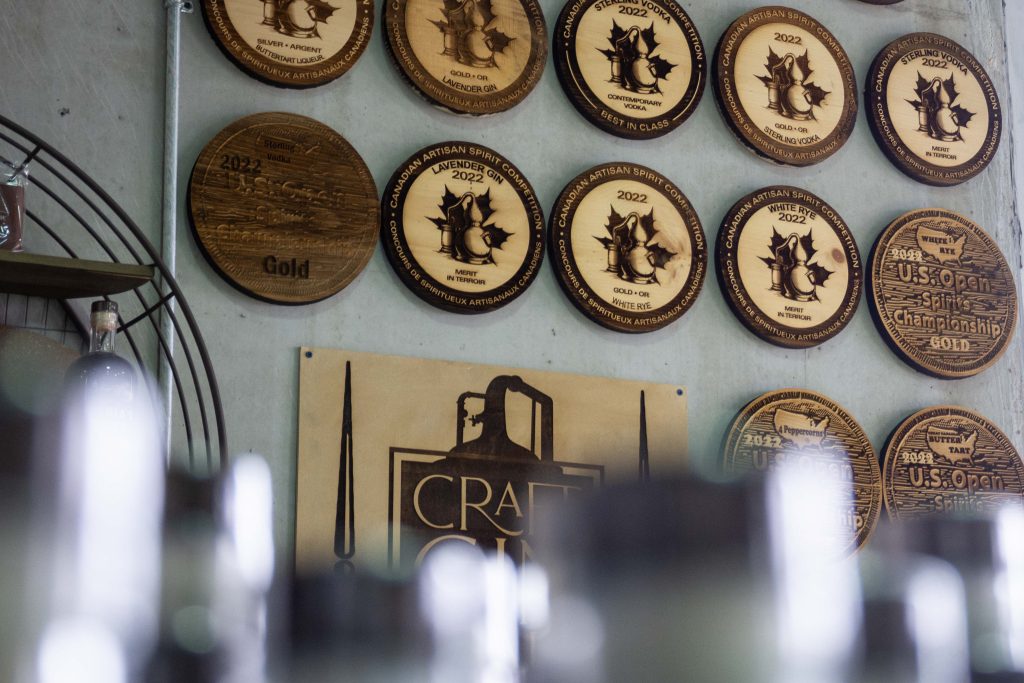 A peek at previously earned awards displayed within the showroom at Silver Fox Distillery. (Photo by Jordan Snobelen)

The vodka is a three grain blend, fermented off the grain. All the alcohol comes from the starches covering the grain, and Lisa says it creates a smoother, richer profile.

The vodka is specially filtered through a custom-made appliance, and after distillation, goes into a large, silver-coloured rolling bin.

“When we put it in there, there’s almost a butterscotch finish to it, a really smooth finish, and it gets that once it’s filtered, which we thought was kind of interesting,” Lisa explained.

Behind the name is the Townsends’ soon-to-be son in law J-Rad Sterling.

“He said it was a dream of his to have a brand of vodka … so we did the vodka up for him and called it Sterling, so he’s on the back label,” Lisa said.

The logo on the front, a skull with horns, is drawn by the Townsends’ daughter Dejah.

Beyond the Dr. Who-themed television show paraphernalia in the distillery’s showroom, is a corner adorned in awards from past years’ competitions. 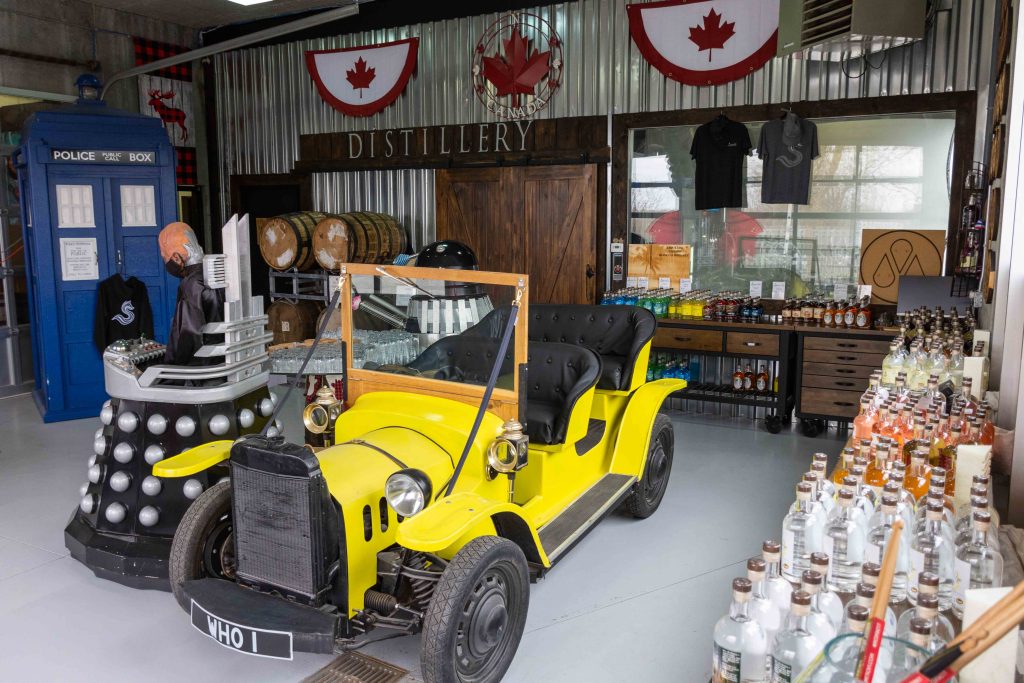 Affectionately known as the “Geek Museum,” the Silver Fox Distillery showroom has plenty of references for Dr. Who fans, among 26 distinct bottled products. (Photo by Jordan Snobelen)

In all, Silver Fox has taken in 26 awards in Canada and the U.S. since opening.

“Blown away” is how Lisa describes the feeling of coming out ahead of entries from across the globe.

Dow Scoggins, director of the U.S. Open Whiskey and Spirits Championship, said by phone from Ohio that he finds it “truly remarkable how such a young distillery was able to beat people that have been around for five to 15 years.”

Scoggins also said Silver Fox’s entries have improved “astronomically” from one year to the next.

The achievement will help to get the distillery’s name out, Lisa said, something badly needed after the doors have been closed for so long.

When they’re not collaborating on the next award-winning creation, Mark works at an automotive factory and Lisa calibrates hearing aids.

Lisa said she could barely handle a hard drink when they first started out. She’s since acquired a taste, but funny enough, she says, they still aren’t big drinkers.

Instead, they’re a rare couple who “love working together” and thinking outside the box to make something interesting. 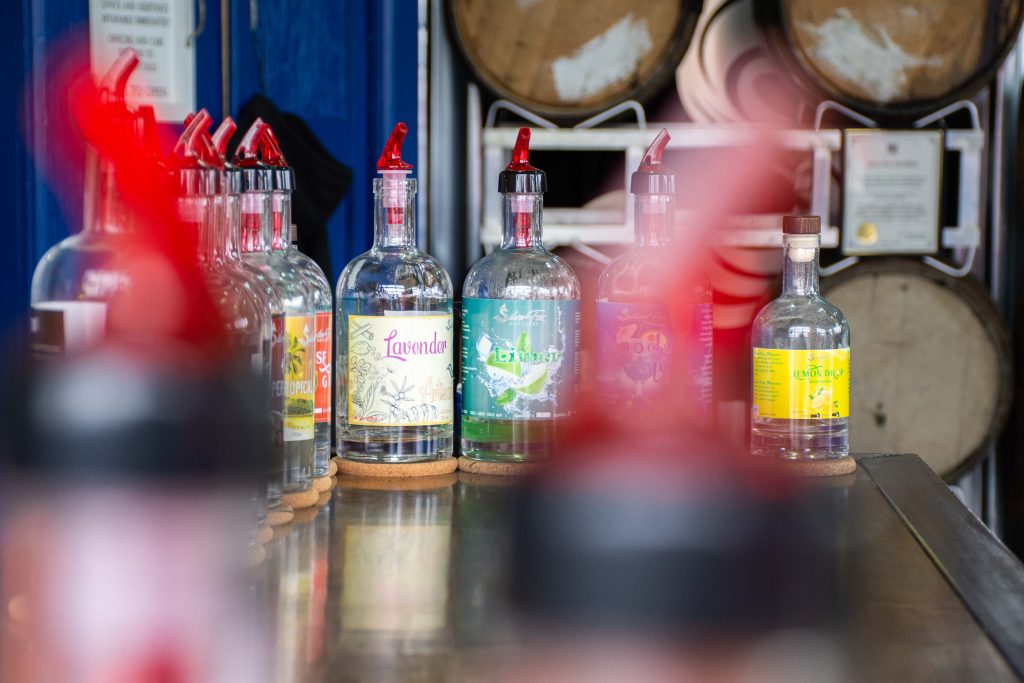 “The Lavender” is a London Dry style gin created by Mark and Lisa Townsend of Silver Fox Distillery. (Photo by Jordan Snobelen)

Mark is a self-taught distiller and Lisa is the finesser, working to dial in just the right amount of botanicals and herbs, such as their locally-sourced lavender from Tullamore Lavender Co., located near Arthur.

A citrus gin took 20 attempts in as many weeks to hone in.

An absinthe is currently under development (no easy feat) and come October next year, 12 barrels of whiskey will have finished ageing, adding to their current 26 different offerings – nine of which are award winners.

Silver Fox recently acquired a “by-the-glass” licence from the province to serve patrons in-house and are participating in Wellington County’s Taste Real Spring Rural Romp on May 28.