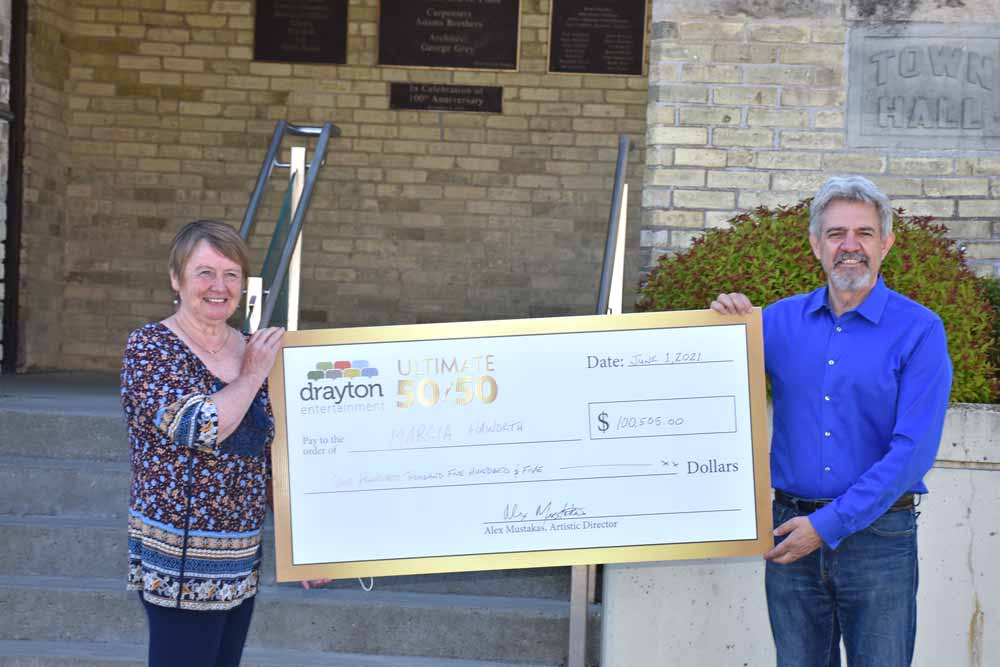 DRAYTON – Marcia Haworth, a resident of Rockwood, has won $100,505 in Drayton Entertainment’s third Ultimate 50/50 Draw of the year.

Haworth is a longtime patron of Drayton Entertainment and has been attending shows at the Drayton Festival Theatre since 1991.

“It’s so exciting. I keep thinking, did this really happen? It’s marvelous.”

Haworth said she and her husband were at the very first show at the Drayton Festival Theatre and have gone back at least once every year since. In total, she said she has been to well over 100 performances.

Drayton Entertainment holds regular 50/50 draws at performances, but over the pandemic it has held three much larger 50/50 fundraisers to help make up for lost revenue it has experienced across its seven venues in Ontario because of the pandemic.

“Every time we come, we buy the 50/50. So, when I saw online that they were doing a 50/50 I just thought that was such a brilliant idea, so it enables them to keep supporting their youth programs.”

“This is someone who’s been with us since day one, basically,” he said.

“The first show she ever saw was the first show that I directed here at the Drayton Festival Theatre over 30 years ago.”

Mustakas said the pandemic has caused major problems for the company. He said it has lost millions during the pandemic.

The Ultimate 50/50 Draw fundraisers it has held this year have been a lifeline, with no other stream of revenue coming in.

Although the 50/50 draws have helped to put a dent into lost revenue over the pandemic, Mustakas said they have not come close to making up for all that was lost.

He said it would take another $2.7 million for Drayton Entertainment to break even for 2020.

“It’s a great fundraiser for us. All our theatres have been closed for the last 14 months. There’s absolutely no stream of revenue coming in other than our 50/50.”

Mustakas continued, “this is our third one. We’re just really grateful that we have the support. In this (50/50 draw), the pool went up about $30,000 in the last three days.”

Mustakas said he is hopeful that by the fall, theatres will be up and running again, once the majority of the population is vaccinated and feels safe to enter a crowded auditorium again.

In the meantime, he said the 50/50 draws will continue.

“We hope to continue it for months to come, or at least until we’re up and running,” he said.