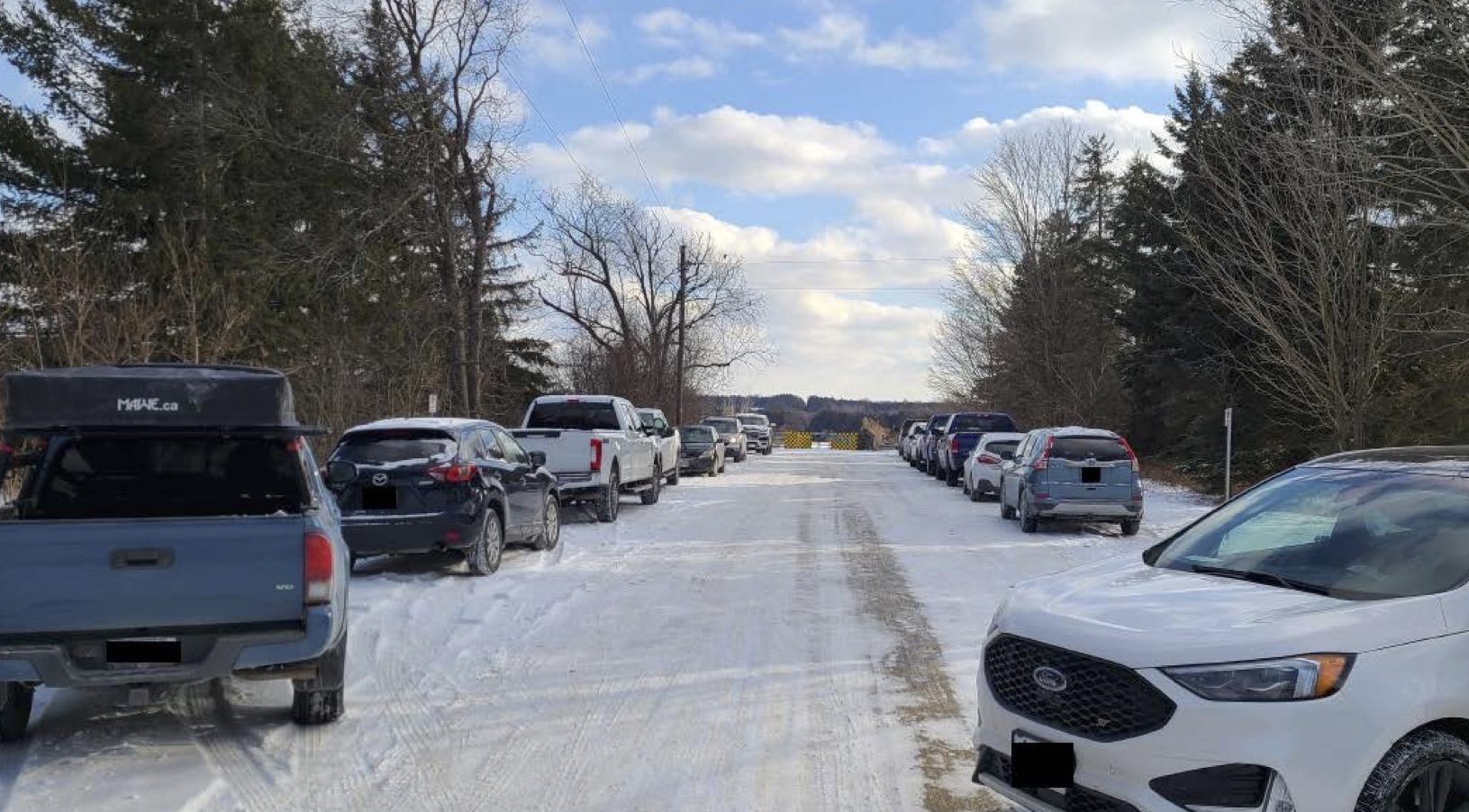 Teaira and Dominick Brown say parking is one of the major issues they have to deal with near their home on Sideroad 10 North in Puslinch Township. (Puslinch council agenda image)

PUSLINCH – Teaira and Dominick Brown have asked Puslinch council to address safety issues on Sideroad 10 North near their home.

With a popular Guelph Hiking Club trail at the end of their street, the couple raised concerns about speeding, parking, signage, blocking of driveways and other issues, including confrontational and racist incidents in recent months.

“We aren’t asking for the area to be closed off, we love the people that come here,” Teaira told council on April 21.

They are pleading for council to help them make the area safer for everyone.

“The speeding, lack of proper signage, and overcrowding of cars on our small street, along with many entitled individuals who think it’s okay to be disrespectful with words and actions has been increasingly frustrating,” Teaira said.

“We came here from Toronto to have a calmer life for our kids, and we’re not experiencing that at all.”

She added the overcrowding of cars parked on their road has made it unsafe for her family to live in the area.

“One of many occasions that stands out is when our driveway was blocked when I had to get my daughter to the hospital,” Teaira said.

The Browns are asking council to make the following upgrades to Sideroad 1o North:

Dominick Brown said that bylaw violations have become routine on their road.

“The congestion on our street is quite absurd. We are desperately seeking council’s assistance on mitigating the problem,” he said.

“Imagine the frustration of having your driveway be routinely blocked by double parking, and also your mailbox and your garbage bins on pickup day.

“We beg that you only allow 10 cars to park in the area at one time” (instead of the 25 that are currently allowed in the designated parking zone by the trail).

The Browns said a speed limit of 20 to 25km/h would be more appropriate for their portion of the road, which is only roughly 400 meters in length.

They noted that most people miss the speed limit sign, and often drive 60 to 70km/h down this road.

The couple also told council the hiking trail is being abused with large gatherings, even during the lockdown, and a significant amount of littering.

They also expressed concern over many disrespectful and confrontational incidents, noting their family has had to call the police after being threatened by people after asking them to comply with bylaws and lockdown restrictions.

Dominick also relayed that he was told “You don’t belong here” by someone he confronted over a parking violation.

“On three separate occasions, I’ve had racial abuse thrown my way as a result of defending my wife, as well as my mother in law,” he said.

“These individuals have never been held accountable for racial abuse, nor have they been reprimanded for speeding, parking illegally, or having their dogs running at-large.”

He added, “We are imploring council to rise to the challenge and come to our aid by addressing the things that undermine our safety and well-being.”

Members of council voted unanimously to have staff return with a recommendation on how parking can be better managed on this section of Sideroad 10 North.

Councillor Matthew Bulmer praised the family for not pushing an “all or nothing” approach.

“It’s so much easier for us to deal with situations where people recognize that there are multiple interests at play, and the fact that you haven’t asked us to close things or stop other people from enjoying the natural environment really speaks volumes to your interests in the community as a whole, and not just in your own interests,” Bulmer said.

Councillor Sara Bailey was also supportive of the family.

She said she hopes that some sort of compromise can be reached where people can still enjoy the trails without causing disruptions.

“Hopefully we can come up with a good compromise where there is a safe place for people to park, and to come and enjoy the trails that are there without disrupting the neighbouring property,” Bailey said.

Mayor James Seeley added, “We have to do what we can to ensure that you have access to your driveways.”

The mayor said he doesn’t know what the answers are at this point, but he looks forward to hearing the township staff report on how to address the issues.