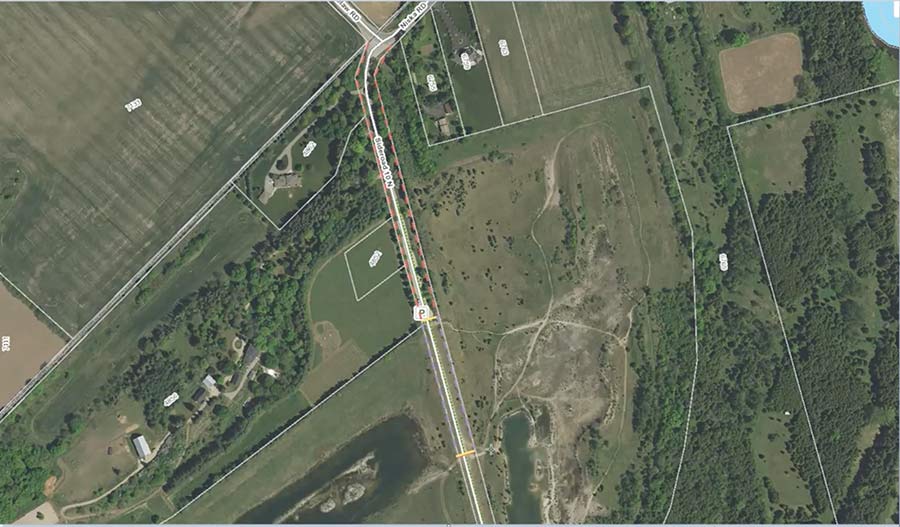 Puslinch Council has endorsed a resolution that would allow for parking to occur outside the residential property boundaries on Sideroad 10 North. Puslinch council meeting image

PUSLINCH –  Council here has endorsed a resolution that would allow for parking to occur outside the residential property boundaries on Sideroad 10 North.

Township staff is proposing to open the unopened road allowance, where the end of the road is currently gated off.

The township has received several complaints regarding the parking of vehicles on Sideroad 10 North, when people are accessing the nearby Speed River Trail. On April 21, local residents Teaira and Dominick Brown appeared in front of council as a delegation expressing concerns relating to the parking, speed, and signage on their road.

During the delegation, council directed staff to find potential parking solutions and report back to council.

Sideroad 10 North extends from the intersection of Whitelaw Road and Niska Road and ends approximately 320 meters south. One of the entrances to the Speed River Trail is located near the south-eastern limit of the road.

Currently there are “No Parking” signs in the area, but they can’t be enforced because no bylaw has been passed.

Initially two proposed parking solution options were offered, but staff had also come up with a last-minute third option just before the meeting, an option which was outlined by bylaw enforcement and property standards officer Ivan  Lunevski. These options were referred to in the meeting as “option one,” “option two,” and “option three.”

Option three will include prohibited parking on one side of the road.

When option three is implemented, the parking prohibition suggested in option two would be moved 50 metres up to where the gate is, so parking is moved further away from the residential properties, and then permitted for the stretch where approximately 30 cars could park on one side of the road.

Lunevski said the third option is a viable option that could be implemented sooner than option one.

With “option three” staff is proposing to open the unopened road allowance (where the end of the road is currently gated).

This will allow for further parking to occur outside the residential property boundaries.

There would be no structured parking area, but a turn-around bulb would be constructed at the end of the extension.

Lunevski described the pros and cons of this option to members of council.

“This could potentially facilitate parking for as many as 70 vehicles (if parking were to be allowed on both sides of the road),” Lunevski said.

“It would also direct parking away from residential properties. This also has a much lower cost to install compared to the other options.”

However, Lunevski said it would cost approximately $4,000 to extend the road, and the increased volume of parking could potentially attract more people to the area.

On the other hand, “option one” would have included a more formal parking area be established at the south-eastern limit of Sideroad 10 North. The construction of the parking area would have involved clearing of brush, debris and vegetation to maximize the road allowance width and create designated parking spots for approximately 10-15 vehicles. Part of this recommendation included that a “No Parking at any Time” restriction on Sideroad 10 North from the Whitelaw Road and Niska Road intersection to a point 250 meters on both sides of the road be established.

Lunevski said with this option, the township could potentially have the ability to create a parking lot.

“This would maximize vehicle parking for approximately 10-15 vehicles,” he said.

“There would be less of an opportunity for parking violations to happen because the parking would be clearly marked and indicated.”

Lunevski said the downside to the first option it that it is quite costly.

“Just from the initial report from public works, they advised us that it would cost approximately $10,000 if staff were to install this.”

“Option two” includes no new parking area being established, but instead that a “No Parking at any Time” restriction on Sideroad 10 North from the Whitelaw Road and Niska Road intersection to a point 200 meters on both sides of the road be established.

Part of this recommendation includes parking for approximately 50 metres on both sides of the road at the south-eastern limit of Sideroad 10 North. This would allow approximately 10 vehicles to park and there are no private driveways on this section of the road.

The only change to the existing situation would be installing “No Parking” signage and allowing for vehicles to be parked on the side of the road.

“That would involve the installation of about 8-10 signs for “No Parking” from Whitelaw Road and Niska Road, moving about 200 metres toward the end,” Lunevski said.

However, Lunevski said parking on the road increases liability risks for the township, and there is a greater possibility of parking infractions due to the lack of structured parking.

“My preference seems to be number three, because you move everything out of the residential area,” he said.

Councillor Matthew Bulmer raised concerns with “option three”, saying that having 70 cars parked on the road would be too many. Bulmer still liked this option overall, but suggested parking should only be able to take place on one side of the road at the extended road allowance.

“I’m not as comfortable with having cars on both sides,” he said.

“70 cars are a lot of traffic. I would be more inclined to put my support behind “option three”, but only have parking on one side for that extended open road allowance.”

Lunevski said only about 20 cars are parked in the area at the busiest times and agreed with Bulmer that parking should be restricted to one side.

Lunevski said this could prevent issues with double-parking and prevent emergency vehicles from having problems if they needed to access the area.

He added that the limitation of parking on only one side of the road would still allow for about 30 vehicles to park, which would fully accommodate use of the nearby trail.

Councillor Jessica Goyda said “option three” is the only option that allows the trail to be used to its full capacity.

“Based on that assessment, it sounds like just based on the need for amounts of vehicles to be parked, “option three” would be the best choice regardless, because options one and two don’t necessarily provide adequate parking for it (the trail) being used at its full capacity,” she said.

“It seems like there’s a consensus that “option three” seems to be the way to go. One thing I want to suggest is that we do this as a graduated process,” he said.

Seeley noted that the township has already added seven parking spaces on Niska Road and use of the nearby trail will drop to historically lower, pre-pandemic levels as vaccinations continue. He said most of the complaints that have been received have been since the pandemic began, when use of the trail skyrocketed.

Seeley also said while graduating this process in, they may find there isn’t a need to spend additional funding to open the new parking area, because of the signage and additional parking spaces on Niska Road.

CAO Glenn Schwendinger explained that township staff will have to come back with a report on costs and finalize details on how to best implement this plan and report back to council at its June 16 meeting.

“Since it’s an open-road allowance, we’d have to do some legal work and bylaws to open an unopened road allowance,” Schwendinger said.

Seeley suggested council go forward with “option two” at the June 16 meeting of council, prior to getting an official report on “option three”, to ensure the signs are installed as soon as possible. All members of council were in agreement.

Lunevski confirmed that the proposed amendment will restrict parking 200 metres southwest, including an area of about 50m where people can park, up until the edge of the unopened road allowance where the gates are.

Council passed a resolution to have staff prepare an amendment to the township parking bylaw in accordance with “option two” for the June 16 council meeting. Council also endorsed “option three” as presented by staff, and that parking be to one side of the extended road allowance.

Township staff will prepare a report identifying next steps for implementing “option thee” for the June 16 meeting.

The resolution also includes council communicating with the affected property owners to indicate what they are planning to do after an official decision is made.