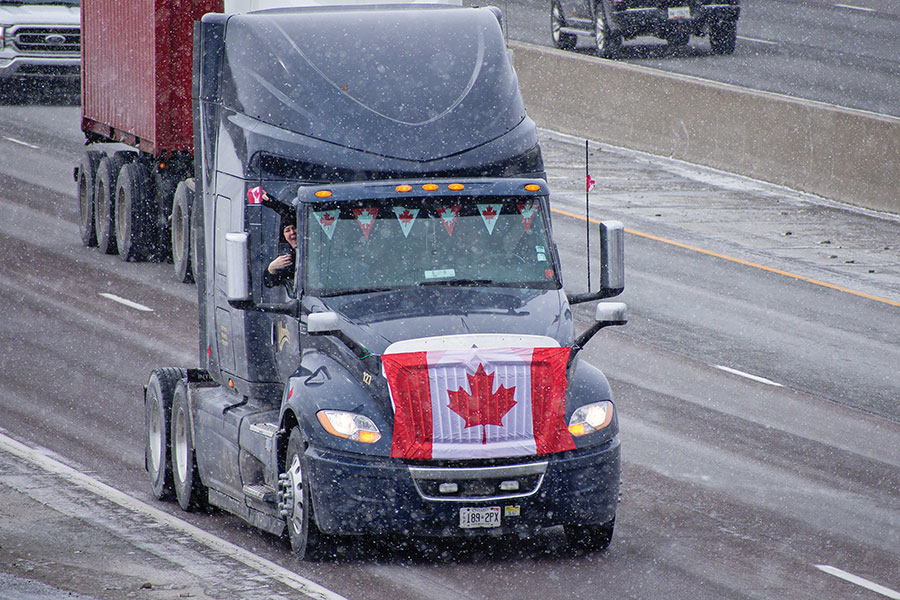 A truck rolls through Wellington County on its way to Ottawa late last month. A Perth-Wellington Freedom Convoy demonstration is slated to begin in Atwood and end near Drayton on Feb. 19, after passing through Palmerston and Teviotdale. Community News file photo

WELLINGTON COUNTY – An anti-mandate protest set to roll through the area on Feb. 19 will proceed, despite an announcement earlier this week from Ontario Premier Doug Ford that the province is ending its vaccine passport system at the end of the month.

Tammy Steckly, one of the event organizers, said on Feb. 14 the Perth-Wellington “Freedom Convoy” will go ahead “unless something drastic is lifted completely.”

Online posters promoting the event call for participants to meet at the Atwood Community Centre in time to depart at noon and “slow roll” through Listowel, Gowanstown, Palmerston, Teviotdale, Rothsay and Drayton.

The event is set to end at Driscoll Farms on Sideroad 12 of Mapleton Township around 2:30pm.

Organizers indicate all types of vehicles are welcome. “Trucks, cars, tractors, rigs – bring them all,” the poster states.

The poster indicates the purpose of the event is to “Help end mandates” and asks participants to “Keep it Canadian – peaceful, polite and free.”

Steckly originally requested “a pre-set question layout before committing to an interview” and then said organizers declined an interview once she received a list of questions from the Community News.

On Feb. 14 she attributed the original rejection to a “lack of communication” and to the fact organizers “couldn’t give any details” at the time of the original interview request on Feb. 10.

In an interview she stressed those involved with the event have “no ill will towards anybody.”

Steckly said the local convoy has nothing to do with illegal blockades that have taken place at various places along the Canada-U.S. border, saying it is instead about standing up for “freedoms.”

She did not explain how the convoy would “help end mandates,” as advertised in the event’s promotional material, instead saying the local event is more about “peace and unity.”

She said she was personally “forced” to receive a COVID-19 vaccine in order to undergo surgery and she expressed frustration that frontline health care workers are being fired if they don’t get vaccinated.

(The province does require those working in long-term care to be vaccinated to protect vulnerable residents, but there is no provincial mandate for other health care workers. Some hospitals and other organizations have instituted their own policies).

“I just can’t stand by and watch … the country I love … be destroyed,” Steckly told the Community News.

She also suggested there has not been “enough research” done on the COVID-19 vaccines.

(MRNA technology involved in the vaccines has been studied for decades, all vaccines underwent extensive trials on tens of thousands of people and they are proven to be safe and effective after close to 80 million doses have been administered in Canada).

Driscoll Farms owner Neil Driscoll said he was not part of the organizational group.

“We were just asked if they could use our yard as an ending point. We agreed to that,” Driscoll stated. “So that’s the only involvement I have.”

Driscoll said organizers indicated they were looking for a wrap-up location in the interests of safety.

Contacted on Feb. 10, Mapleton Mayor Gregg Davidson said he had seen online promotion for the event the previous day.

“I haven’t been invited to it, but I did see it,” he told the Community News.

Davidson said he had no concerns about the event.

“I respect the rights of people to make choices and if they want to have this protest … I’m not against people coming forward and saying their piece, as long as it’s done peacefully,” the mayor stated.

“My dad was a union organizer and I understand about standing up for your rights.”

While promotional material for the local event does not directly mention the “Freedom Convoy” currently blocking streets in Ottawa in protest of COVID-19 mandates or various blockades at border points in Ontario and Western Canada, the slogan “We stand with our truckers – Convoy 2022” appears on the online poster.

“I support people in their right to protest,” said Davidson when asked about related protests.

However, he noted, “there comes a time where if it’s now blocking food getting to our grocery shelves, they need to be cognizant of that and let some of those vehicles through.”

Asked if the municipality was concerned about safety related to the event, Davidson said the township was not anticipating taking any action.

“We’re not planning anything in the municipality,” he said.

“We expect this to be peaceful and it’s just going down our local and county roads and, you know, once they’re on the roadway that’s an issue for the OPP not the township.”

Minto Mayor George Bridge, fresh from a local economic development committee meeting where he heard about the impact of the border closures on Minto industries such as TG Minto, which was forced to significantly reduce production on Thursday and Friday this week, wasn’t supportive of the Perth-Wellington convoy.

He noted the protests against mandates have arrived, ironically, just as decreasing COVID-19 case numbers and hospitalizations are allowing the province to continue lifting restrictions as planned.

“If you look what the province has said they’re going to do,” Ontario should be “getting pretty well past it,” by the middle of March, said Bridge.

Bridge stated the town isn’t planning any measures in response to the convoy, noting roadways are under OPP jurisdiction.

“I would imagine they’ll be reluctant to do anything, but just watch it,” he said of police.

Contacted by the Community News, Wellington County OPP indicated they are “aware of a planned demonstration … and will be monitoring the event.

“Should there be an impact on traffic, the OPP will advise the public via our West Region social media accounts and traditional media releases,” indicates a statement from media relations officer Jacob Unger.

Asked if organizers are concerned about upsetting other motorists on the roads affected by the local convoy, Steckly said the group is going to do its best to be respectful to people in the community.

She noted participants will be told not to honk their horns in towns and organizers have spoken to the police.

“We’re doing no harm to anybody,” she said. “We have no nefarious intents or ill will toward anyone.”

She later added, “We have no intentions of going out of our way to be rude.”

*This article has been updated from an earlier version that did not include comments from event organizers.