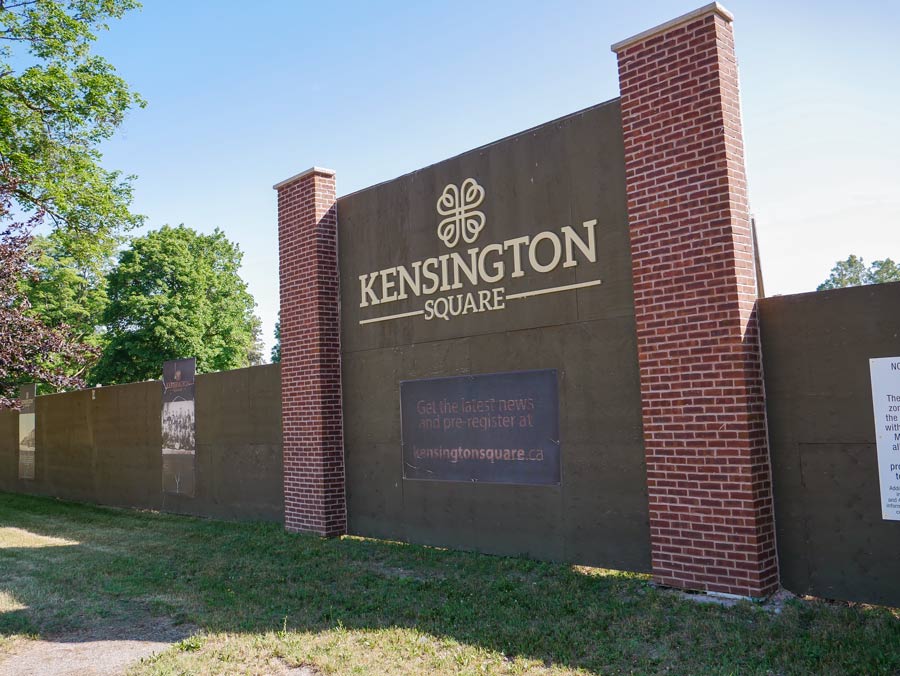 Kensington Square - Owners of the site of the former Erin Public School hope to develop the property into stacked townhomes and are seeking public input. Photo by Matthew Stadler

ERIN – A proposed development project in the Village of Erin is being stalled due to COVID-19. But the owners hope to rekindle interest and generate public comment as the project advances to council, probably this fall.

The Kensington Square Group purchased the old Erin Public School site in 2017 and has a development application before the Town of Erin and the County of Wellington to build stacked townhouses there.

Tom Dolson, president and a principal owner with Kensington Square, told the Advertiser on July 3 that the project has reached the public comment stage. In a normal world, there would be a public open house, a public information meeting, followed by a 30-day period for members of the public to comment.

Staff would compile that information and present a report to council to help inform its decisions going forward. The company could then apply for a zoning bylaw amendment and if that is granted, proceed through the next steps of the process including approval of specific landscaping and site plans.

Dolson said they planned to hold an open house in March or April and a public information meeting before the summer.

“But the province suspended the appeals portion and left (the period for public comment) open-ended,” due to the lockdown he said. “A week ago, they lifted that suspension.”

In the interim, “we have been reaching out to people who have registered, to update them on the application. We hope to hold a public information meeting in August,” he said.

There are logistics to figure out with the town when it comes to holding public meetings. Dolson doesn’t know if they will be virtual or in-person or how either of those scenarios could be carried out given COVID-19 restrictions.

Jessica Spina, communications officer for the town, said in an email that the Town of Erin is preparing to hold virtual public meetings on applications for minor variances and plans to hold its first on July 15, although Kensington Square is not the subject of that meeting.

“It is anticipated that the zoning bylaw amendment would come to council in the fall, but the date would be dependent on the timing of the public meeting and outcomes of the meeting.”

So even though it isn’t an official channel, Kensington Square has launched a website with all the planning documents, background information, the vision for the project, and importantly, a place to ask questions or leave comments.

Dolson said he and his partners will post the questions and answers on the website beginning next week, and it will be updated weekly.

“So far a lot of questions have been about the design, price, floor plan and timing of the project, and those are things we don’t know yet,” he said. But they will answer what they can.

The project has a few unique features, Dolson said. First, every townhouse will have a garage big enough to hold a large vehicle and large garbage bins. And since the property is basically a block of land bordered by four streets, there will be two access points into the complex and no garages or driveways will be accessed directly from those streets.

“The concern was we didn’t want people backing out of their driveway into a busy street. Plus, it makes a better streetscape and that’s nice for the neighbours,” he said.

The second unique feature is that the townhouses will share a commercial septic system that will be removed when the town establishes sewers and a wastewater treatment facility.

“When we bought the property in 2017 there were conversations about the wastewater treatment facility. But we didn’t know if was coming in two years or 10 years and we didn’t want to sit on the property for 10 years,” he said.

So in phase 1, 54 units will be built and they’ll share a commercial septic system on site.

“When the sewers come, we’ll remove the septic system, hook up to the town’s system, and add 16 more units.”

Dolson said because of Erin’s high-water table, the townhouse units will not have basements.

The units will appeal to seniors, singles and young families, he said, and can be built with wider halls and doors and even elevators for seniors with mobility issues.

“I know people still want detached homes, but every town needs a mix of housing options,” he said.

“People want to retire in these small communities, they want to raise their families here.”

For information about the project visit kensingtonsquare.ca.

The town will post notices of pubic meetings on its website, erin.ca, under “newsroom” and then “public notices.”