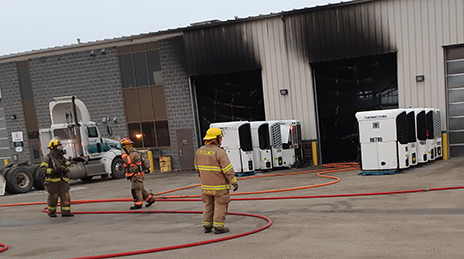 Industrial blaze - No one was injured in a Jan. 15 fire at the TransX building south of Aberfoyle that caused about $450,000 in damage. Submitted photo

PUSLINCH – An industrial fire on Jan. 15 at the TransX building south of Aberfoyle has caused about $450,000 in damage.

Puslinch firefighters responded at about 4pm to the blaze at 7459 McLean Road West.

When firefighters arrived, aided by fire crews from Guelph and Guelph-Eramosa, six of the building’s bays were engulfed by flames.

Gomes, who said there were “explosions upon our arrival,” explained “defensive fire fighting tactics were used at first and then we went into an offensive strategy with interior operations, when it was safe to do so.”

About 37 firefighters in total helped bring the blaze under control quickly, said Gomes, though crews remained on the scene for several hours.

No one was injured in the fire, which caused substantial damage.

The day following the blaze Gomes said an exact damage amount is unknown, though he estimated it at around $450,000.

“We’ll have a truer dollar loss on Thursday,” Gomes said.

Anyone with any information about the fire is asked to contact Wellington County OPP at 1-888-310-1122.