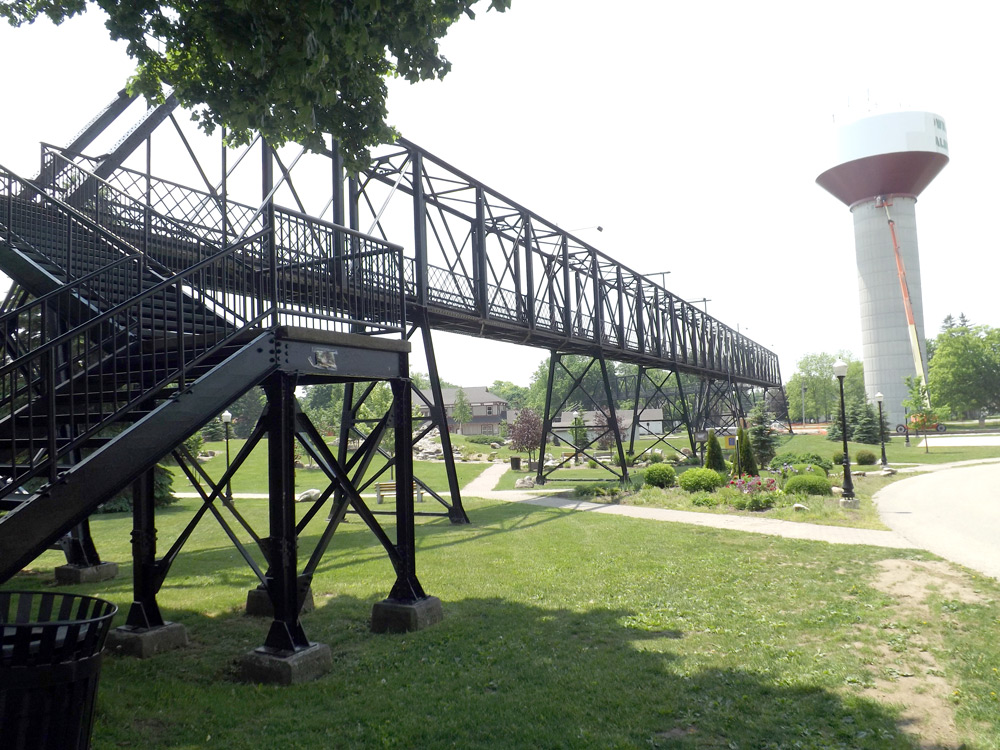 Minto council has awarded a $68,000 contract for structural work on a pedestrian bridge in Palmerston to a Mississauga firm. Photo by Patrick Raftis

PALMERSTON – The Town of Minto will spend about $68,000 to address structural concerns with the pedestrian bridge at the Lions Heritage Park in Palmerston, as part of an $80,000 bridge rehabilitation project.

The bridge once allowed pedestrians to cross town over a busy rail yard.  Although the rail yard has been closed for decades, the bridge remains popular with recreational walkers. It was closed for repairs in early June due to deficiencies found in bridge and culvert inspection reports completed by Burgess Engineering, through Triton Engineering.

The inspection revealed the integrity of several columns on the structure had been compromised.

A staff report notes requests for quotations were sent to five contractors which specialize in work of this nature and two submissions were received. The lower bid from Marbridge Construction Ltd. of Mississauga came in at $68,000, while Burlington-based Jarlian Construction Inc. submitted a bid of $114,000.

Roads and drainage manager Mike McIsaac advised council plans for painting the bridge were put on hold until the damage could be addressed. There is also a plan to add lighting to the structure.

“It was noted that there was a significant potential failure area … which is the reason for the quote going out,” he explained.

Councillor Ron Elliott asked when the work would be completed if council accepted the tender.

McIsaac said the work could likely be done by mid to late October. 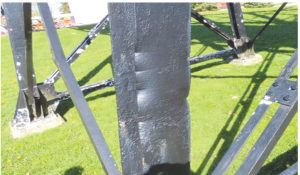 This photo from the Minto council Aug. 24 meeting agenda package shows some of the structural damage that resulted in the closure of the pedestrian bridge in Palmerston Lions Heritage Park earlier this summer.

“I’ve been taken a beating over that bridge all summer. Almost daily somebody’s at me about it,” said Elliott.

“They don’t think they’d fall down if they cross it. But unfortunately we’ve got to listen to the professionals.  I really think it’s a safe bridge. It’s costing a lot of money for something that I don’t think is necessary – but let’s get it done,” Elliott continued.

“I’m a little disappointed that its costing so much, but it has to get done. I’m glad that were going to get it done this year,” said Mayor George Bridge.

“Unfortunately, with COVID, some of the activities we would have loved to have done with that bridge this year were not going to happen anyway,” Bridge added.

“It’s the centerpiece of our whole economic plan for that park going forward and it just has to get done,” the mayor stated.

Councillor Jean Anderson asked for a more detailed explanation of the structural concerns.

“There’s six kink points that are visible there and it’s kind of like a straw, when you kink a straw, with the weight load coming down on it, it has the potential of failing at any point in time,” McIssac explained.

“I think it has a lot to do with wind and snow load as well … that’s kind of why we hire an engineer to look at this. It’s all about liability,” said deputy mayor Dave Turton.

“There is a lot of structural steel up above and it’s the weight associated with that which is a huge concern,” said McIssac.

“I couldn’t even guess at the weight of that actual structure itself,” he added.

A staff report notes that in 2009, repairs to the bridge were completed, including dealing with damaged and missing cross members on the same piers mentioned in the 2021 report as well as further damage to the repaired cross members. Between 2009 and 2021 various park enhancement projects, contractors and infrastructure repair and improvement projects have taken place in the general vicinity of the damage.

The report notes “it would be speculation” to comment on the cause of the current damage.

A motion to amend the 2021 capital budget to include $80,000 for the Lions Park pedestrian bridge rehabilitation project, with funding to come from roads reserves and to award the contract for structural work to Marbridge Construction Ltd for $68,000 plus HST was approved by council unopposed.