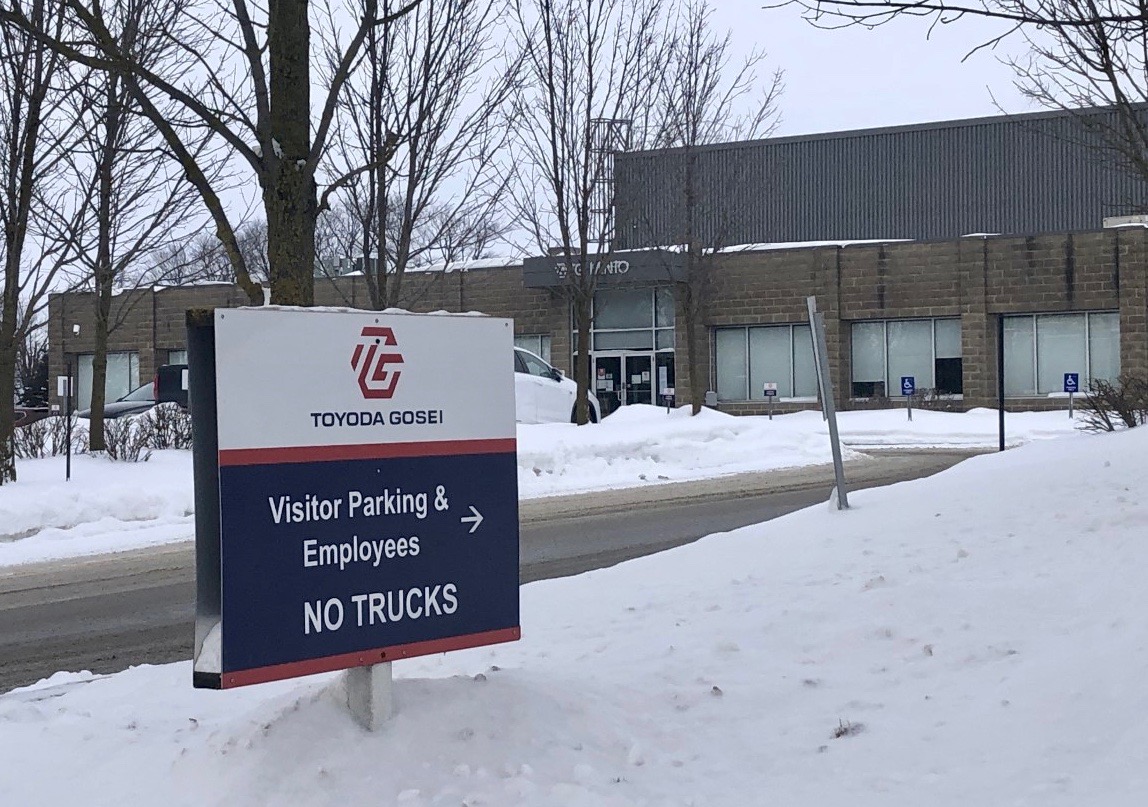 TG Minto, an auto parts manufacturer located in Palmerston, has been forced to reduce production due to protest-related border disruptions this week. Advertiser file photo

WELLINGTON COUNTY – Area industries are feeling the impact of the closure of the Ontario border at the Ambassador Bridge in Windsor by a vehicle convoy calling for the end of COVID-19 mandates.

“We are also taking special measures get product here and ensure we don’t impact our customers.”

TG Minto makes parts for Toyota, which has shut down all three of its Ontario assembly plants.

“Concurrently, some of our customers have been impacted due to supply chain issues. Based on these impacts we have had to reduce our production significantly today and tomorrow,” stated Brownell.

“It is currently unknown if the issues will continue to affect our production next week.”

However, he added, “TG Minto has never laid off any of our employees in our 20-year history and will continue ensure these impacts have a minimal effect on our team members.”

Linda Hasenfratz, CEO of Guelph-based Linamar, said the company is “watching with concern the situation at the border regarding the ongoing protest.

“The last thing any business needs right now is to be shut down yet again. Cutting Canada off from our biggest trading partner can ultimately have only one impact: reducing output.”

Hasenfratz added, “The last two years have been so disruptive to every one of us and our families with situations we can’t control; this one we can.

“To the protestors, please get off the bridge and let our people get back to work earning money for their families.”

A receptionist with Musashi Auto Parts Canada’s Arthur location said the manufacturer had received multiple inquiries from the news media but nobody will be commenting on the matter.

Repeated requests for comment addressed to Jeff Cole of Dana Manufacturing, a manufacturer of thermal products for engine transmissions, went without response as of publishing and a local representative at Dana’s Mount Forest location wasn’t immediately available for comment.

“I don’t mind people protesting, but this has got way too far out of line,” said Bridge.

He noted the behaviour of some of the protestors, specifically a group blockading the border at Coutts, Alberta, is making finding solutions nearly impossible.

“Alberta went and basically got rid of their mandates, and they still are going to stay there because they’ve got other issues. They’re mad at the world,” said Bridge.

With COVID-19 case numbers and hospitalizations declining, Bridge pointed out COVID-19 restrictions are already being lifted as scheduled.

“I’d really be upset if the province goes ahead and jumps early on this (lifting mandates), because in my own personal opinion, I don’t think we’re there yet,” he said.

“And if we jump early … then it looks like these people run the world.”

Bridge feels provincial and federal officials and police made a mistake in allowing protestors to become entrenched in Ottawa and at various border points.

“They showed they could do it in Toronto,” said Bridge.

“They basically laid the law down as people came and said … ‘This is what you’re going to get. You got up to this point in time and if you do more than this, then we’re going to deal with you.'”

Bridge feels the protestors came with some unrealistic and unreasonable demands.

“When they asked for the government to be dissolved as their number one idea, or get rid of the prime minister, as if they have any control over that … Freedom isn’t anarchy.

“That’s what they want. They want anarchy,” he stated.

The Ambassador Bridge, connecting Canadian and the U.S. through Windsor and Detroit, accommodates over a quarter of all annual trade between the two countries and is a daily choke point for thousands of transport trucks moving automotive products between Canada and the United States.

Earlier today, the Ontario government declared a state of emergency in response to convoy protests.

At a Feb. 11 press conference, Premier Doug Ford announced he would convene cabinet and “urgently enact orders that will make crystal clear it is illegal and punishable to block and impede the movement of goods, people and services along critical infrastructure.”

Fines for non-compliance include a maximum penalty of $100,000, and up to a year imprisonment.

The province also announced plans to provide additional authority to consider taking away the personal and commercial licences anyone who doesn’t comply with the new orders.

-With files from Jordan Snobelen and Joanne Shuttleworth