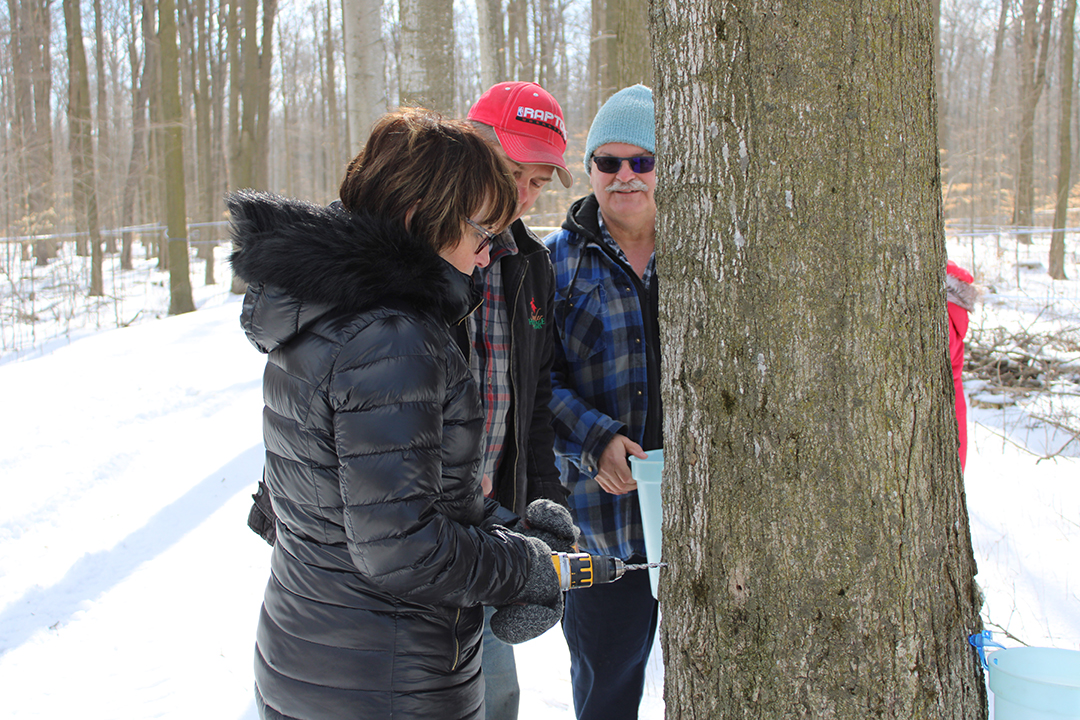 BLOOMINGDALE –  Maple syrup production in the region will start later than  in  the past two years  according to the Waterloo Wellington Maple Syrup Producers.

“This time last year we were all done and boiling,” said president Terry Hoover during the season’s ceremonial first tapping on Feb. 22 at Snyder Heritage Farms outside of Woolwich township.

“It’s all to do with mother nature, so whatever she predicts and does, we have to follow, so this is the first crop of the year on the farm.”

The announcement likely signals a later start for many of the other major crops grown and produced in the area, Hoover declared.

“We are the only commodity group that can say that, because everything follows after maple syrup,” he said.

The perfect conditions for maple syrup production are 5 C and sunny during the day and -5 C at night.

For the past two years, maple syrup production started early, with many producers tapping in mid-February.

“I think it is going to be a little later than it was last year because the rain in between the ground and the bush may be frozen a little more,” Grubb said.

“Last year we started tapping, or started making syrup on the 25th of February and this year I think it’s going to be end of March.”

He and his wife Lillian  have been producing maple syrup and maple syrup candy at their Palmerston farm since 2009.

Even with his experience in the industry, Grubb said it can be hard to factor later starts into bottling and shipping schedules.

While maple syrup production typically takes place over a span of six weeks, the period can be extended or shortened depending on the weather and still not have an effect on the yield.

“It’s hard to factor because the weather has so much to do with it; depends how quick it gets warm, that will shorten the season if it gets warm real quick,” said Grubb.

Noting area maple syrup producers had a “fantastic” long season in 2018, he said he hopes the weather will cooperate again this year.

Speaking to the Advertiser after the ceremonial tapping, Hoover said that in his time as a member of the Waterloo Wellington Maple Syrup Producers he has noticed a marked change in the climate overall.

Whereas it once was relatively unlikely to have sap running at night, he said he has noticed that it is becoming more and more common.

The local syrup producers organization has been trying to spread awareness about the importance of the industry for 53 years, the same amount of time it has been a part of the Ontario Maple Syrup Producers Association.

According to Hoover, the industry currently contributes an estimated $60 million to the Canadian economy, as well as close to 2,000 jobs and over $12 million in taxes.

Recently, maple syrup has been upgraded from being defined as a topping to an ingredient. Hoover added research into maple syrup found that it contains 10 to 38 per cent of the daily anti-oxidants allowance, “which is huge, and they have also figured out that maple helps antibiotics work better if you are ill.”

Woolwich Township Mayor Sandy Shantz thanked Hoover and the other maple syrup producers before she took part in the ceremonial tapping.

“On behalf of the township and the region… I congratulate you on hopefully a good season going forward…” Shantz said. “Thank you for all of your work for producing such a wonderful product and all the best in the upcoming season.”