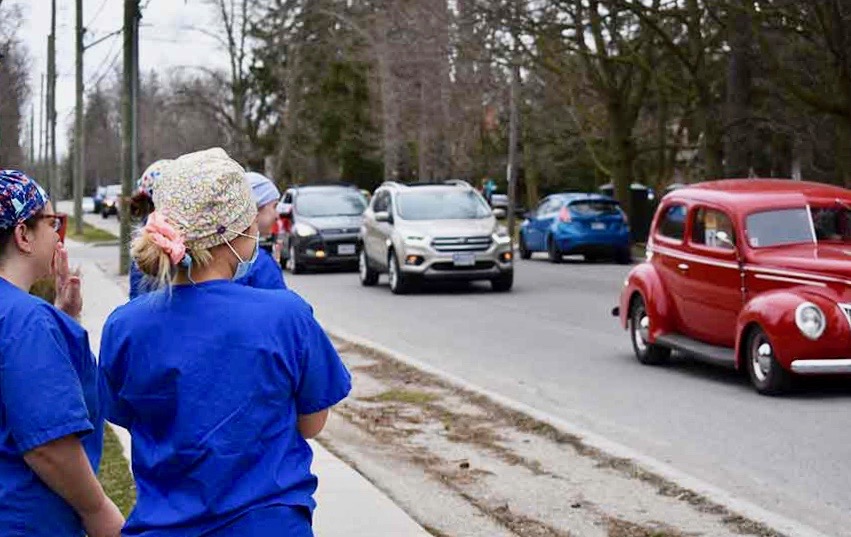 Public health officials are asking members of the public not to participate in car rallies or parade celebrations like the one in Centre Wellington on April 26 to thank frontline health care workers. Advertiser file photo

WELLINGTON COUNTY – While they might seem like safe physical-distancing activities, Wellington-Dufferin-Guelph Public Health (WDGPH) is asking people to not participate in car rallies or parades at this time.

“While [WDGPH] knows how important celebrations are, by provincial directive, parades are banned public events and people are encouraged to celebrate using online methods,” stated public health spokesperson Chuck Ferguson in an email.

“A line of cars makes social distancing difficult and drivers/passengers need to ensure they are keeping distant (two metres/six feet) when windows are down, and they are talking to other people on the curbside or in other cars.”

Car rallies, parades, and drive-by birthday celebrations have been gaining traction with an increasingly impatient public dealing with stay-at-home directives and a desire to celebrate milestones with loved-ones.

Several such rallies have also occurred in the county in recent weeks to show support for frontline and health care workers.

But they pose a risk, Ferguson said.

“Long lines of cars on residential streets may raise traffic accident risks and risks to pedestrians which could involve the need for police interventions or other emergency responders such as paramedics or fire,” he said.

Car rallies, like any other gathering, are limited to a maximum of five, and people should not get out of their cars.

Police can’t charge people for being less than two metres from one another, but they are allowed to charge people if they are part of gatherings greater than five people.