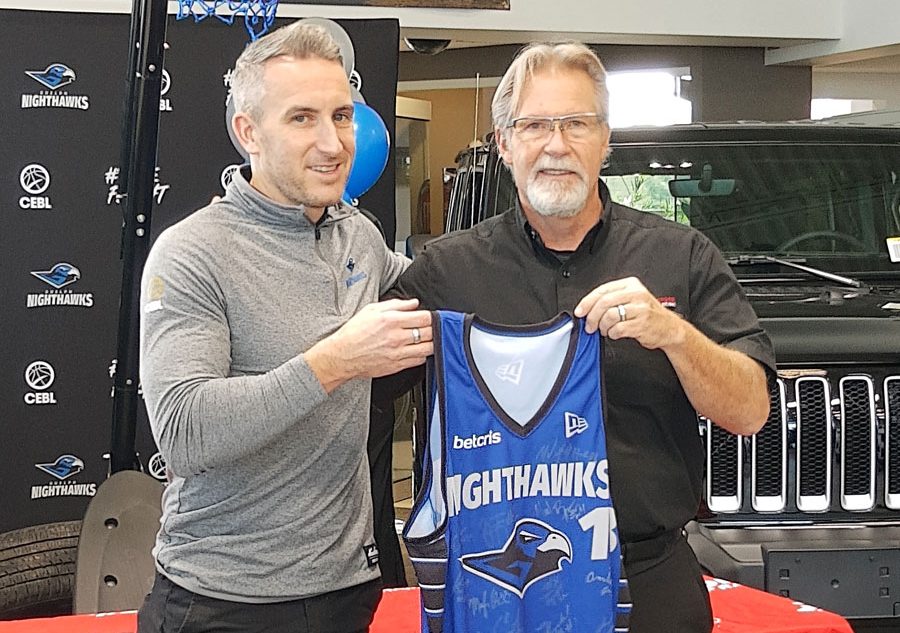 GUELPH – Sports-deprived fans will be excited to know the Guelph Nighthawks are aiming for a full, in-person season this year.

And to sweeten the pot for basketball fans, Wellington Motors is giving three opportunities for fans to win a one-year lease of a 2022 Jeep Wrangler.

“We’re quite excited to be involved,” said Wellington Motors principal dealer Sam Fairhall at a media event to kick off the contest on Feb. 24 at the Guelph dealership.

“Wellington Motors is deeply invested in Guelph and its community. And this partnership allows for Wellington Motors to add an element of entertainment for Guelphites to make this growing sport even more entertaining.”

The Nighthawks formed in 2018 and played their first season in the Canadian Elite Basketball League in 2019.

But with the pandemic, they bubbled in St. Catharines and played for a televised audience only in 2020. In 2021 they played a full season and fans were allowed to watch in person, but with limited capacity.

“So this season we return to regular play and we can’t wait,” said Nighthawks president Cameron Kusch.

He noted it was hard to get established and build momentum for the fledgling team while the pandemic kept throwing challenges its way.

Kusch added the City of Guelph supported the bid to have a Guelph basketball team in the league and fans have shown their love from the get-go.

“Guelph is a passionate sports community, and they are passionate about living here,” he said.

“So, our team is excited to play for the fans again. We’re looking forward to a great season.”

Wellington Motors has signed on as the official auto dealership of the Nighthawks and to tip off the season it is holding the Jeep Wrangler half-court shot contest. The winner gets a free one-year lease of a 2022 Jeep Wrangler, valued at $8,400.

Here’s how it works.

There are three dates when the contest will run: the home opener on May 26, the Father’s Day game on June 19, and the regular season home finale on July 27 at the Sleeman Centre in Guelph.

Those who want to give it a go must register at www.thenighthawks.ca/jeep-wrangler-half-court-shot-contest and a week prior to each game, a name will be drawn from those registered.

That person will be contacted to make sure they can attend and will receive two complimentary tickets. Then at half-time, they get one chance to make the half-court shot. If they do, they drive away a winner.

The contest continues at each of the three games, so potentially three Jeep Wranglers could be won.

“This is definitely one of the more proud and exciting partnerships Wellington Motors had been a part of recently and I look forward to this season,” Fairhall said.

The Nighthawks play the Scarborough Shooting Stars at the home opener on May 26 at the Sleeman Centre.

Season tickets and the 10-game regular season schedule are available at www.thenighthawks.ca or by contacting membership services at 519-988-4295.