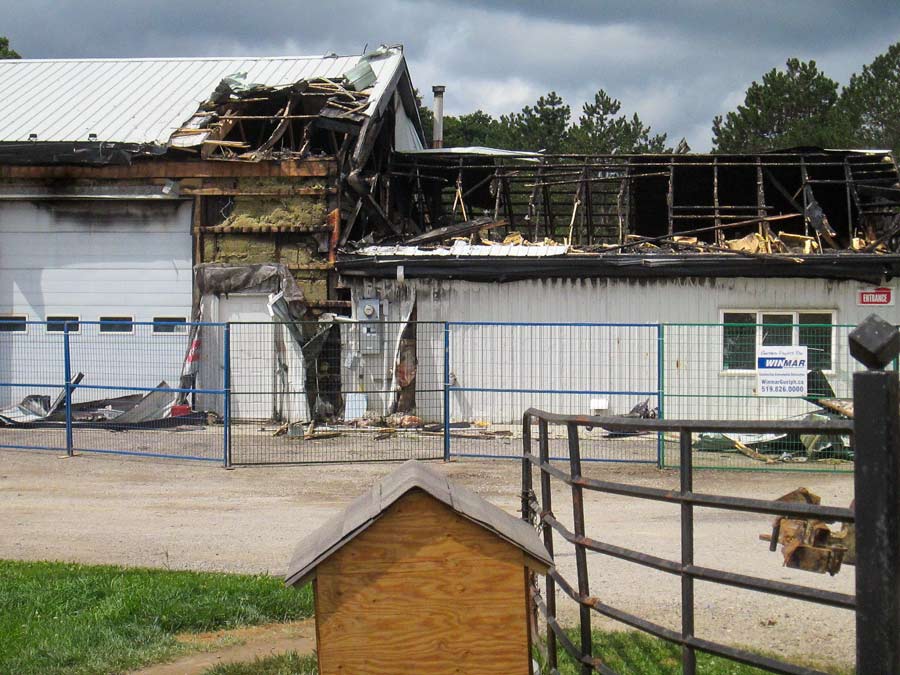 An early morning fire on Aug. 3 severely damaged the front portion of the John’s Towing building at the corner of Highway 89 and Concession 8, east of Mount Forest. A damage estimate has not yet been made available. Photo by Lynne Turner

Wellington North Fire Service stations in Arthur and Mount Forest responded to the blaze, at the corner of Highway 89 and Concession 8, at around 12:20am.

Upon arrival, firefighters “found some fire and a lot of smoke coming from the building,” said Chris Harrow, director of fire services for Minto and Wellington North.

“The crews, with help from tankers from Minto Fire, were able to knock down the fire and keep it from spreading too far into the shop,” Harrow said.

“The heaviest … fire damage was to the roof structure of the office portion.”

Harrow said the office area “suffered severe damage” but the fire department is working with the insurance company for an official damage estimate.

“It’s so hard to tell nowadays because when you get a lot of smoke damage they end up tearing the whole building down and it is a complete loss.”

Harrow said the cause of the fire was deemed accidental and could probably be attributed to the electrical system.

No one was injured and no one was in the shop when the fire started. Harrow said a passerby noticed the blaze and called 911.

At the height of the fire there were 25 to 30 firefighters on scene, which was cleared by 5am on Monday morning.