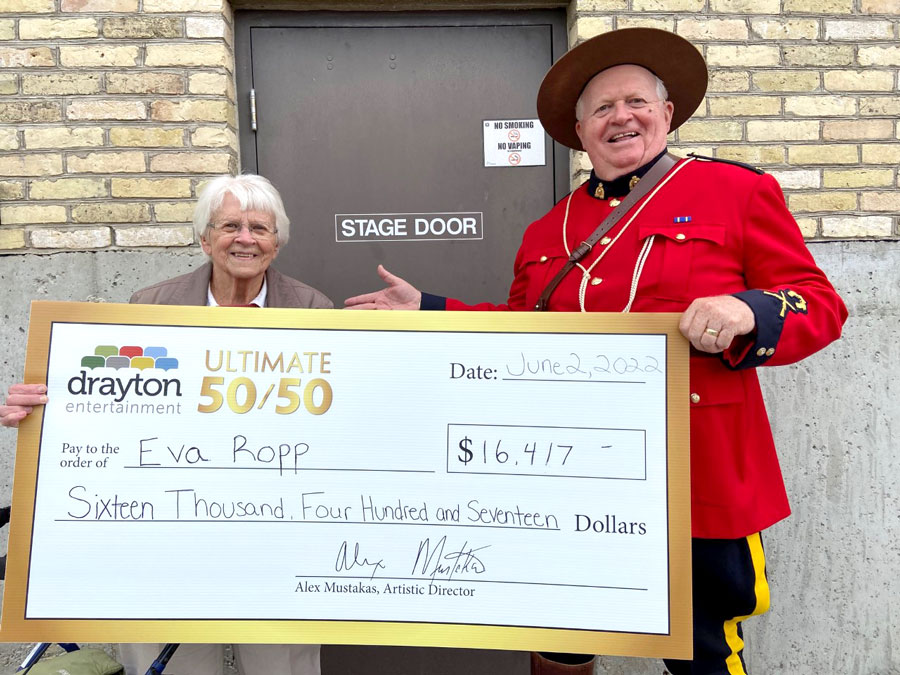 Lucky winner – Drayton resident Eva Ropp was the winner of the May jackpot taking home a final prize of $16,417 in Drayton Entertainment’s online 50/50 draw. Drayton Entertainment performer and board member Neil Aitchison, as his alter ego Constable Archibald F. Inkster, presented Ropp with her prize at the Drayton Festival Theatre. Submitted photo

DRAYTON – Eva Ropp has been volunteering at the Drayton Festival Theatre for over 20 years.

She loves going to shows, but she never thought when she entered the 50/50 draw to support the theatre that she would be the lucky jackpot winner.

“I never even considered that I could win the big jackpot – it’s unbelievable. I am shocked” said Ropp.

“I immediately called my kids and they were so excited for me! We celebrated last night with pizza and wings from Family Time Pizza, our favourite place in town!”

Over the years, Ropp has been in the audience or volunteered for many shows at the historic summer theatre. She’s seen Joseph and the Amazing Technicolor Dreamcoat at least five times, and particularly enjoys productions like The Sound of Music, or anything with Neil Aitchison’s Mountie character.

“I just love those Canadian shows with Neil Aitchison – they are so funny and entertaining. It’s awesome that the theatre is reopening with Sorry, I’m Canadian 2. We all need a laugh,” said Ropp. “I can’t wait to see it.”

After a two-year closure due to the ongoing COVID-19 pandemic, the Drayton Festival Theatre reopened this week with the first of three shows that will be on stage this summer – Sorry I’m Canadian 2, which runs until June 18.

Aitchison stars as his alter ego Constable Archibald F. Inkster offering insights on everything that is uniquely Canadian.

In between topical rants, he is joined by a five-person band to relive the magic of the Great Canadian Songbook including gems like Alberta Bound, Fox On The Run, Black Fly, Song of the Mira, I’se the B’ye, Sonny’s Dream, Farewell to Nova Scotia and more.

Ropp doesn’t know exactly what she will do with her windfall, but she is definitely intending on using some of it for a trip to New Brunswick to see her sister this summer – and of course, she’ll be at the theatre seeing a few shows.

“It’s serendipitous that someone who is such a long-standing supporter of the Drayton Festival Theatre has taken home the jackpot during the same week that the theatre is finally re-opening,” says Drayton Entertainment artistic director Alex Mustakas.

“We are thrilled to be back bringing music and laughter to the Drayton community. Congratulations to Eva on her win, and thank you to all our volunteers and audience members – we couldn’t do what we do without you.”

The 2022 Season at the Drayton Festival Theatre includes three productions. After Sorry, I’m Canadian 2, the rural romantic comedy Buying The Farm will be on stage from June 29 to July 16, followed by the inspirational musical tribute Good Ol’ Country Gospel from Aug. 11 to 28.

Although performances are returning live and in person, the 50/50 draw will remain online for the time being. The June raffle has already started and will run through 11:59pm on June 30.

The Grand Prize draw will take place on Canada Day, July 1, at 12pm.

There are two unique early bird prizes for June:

Tickets are available for purchase online at https://drayton5050.com.