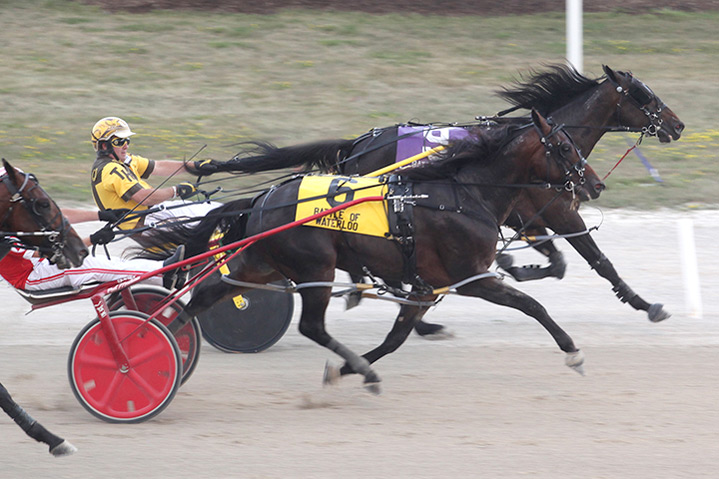 Action at the Grand River Raceway’s annual Industry Day revolves around the Battle of Waterloo and Battle of the Belles. This year’s event is set for Aug. 3.
NCJ Photography

Bettor Sun and Doug McNair left from post five to capture the lead in the first elimination dash (Race 3) and was overtaken by the 1-9 favourite Springbridge Duel with Bob McClure by the half-mile marker. But Bettor Sun, a longshot whopper at 35-1, managed to eclipse the pair in the stretch with a maiden-breaking charge in 1:54.1 for breeder/owner Willow Oak Ranch. Gregg McNair trains the Sunshine Beach colt.

Springbridge Duel was the runner-up by a length. Trained by Casie Coleman Herlihy, the son of Big Jim was a $40,000 yearling acquisition for West Wins Stable, Steve Heimbecker and Mark Kantrowitz.

Socrates Blue Chip was third with Jody Jamieson and Armor Seelster with Louis Philippe Roy rounded out the top four.

Candy Trader scored his second straight win for trainer Anthony Beaton in the second elimination division (Race 6). In rein to Sylvain Filion, the pacer popped out from the rail to rush by stretch leader Avion Seelster (Jody Jamieson), winning by a neck in 1:55.2. Beaton conditions the Bettors Delight gelding for Steve Heimbecker, Larry Menary, Michael Guerriero and Ben Murdy. The partners paid $72,000 for Candy Trader as a yearling.

Candy Trader drew post seven for next week’s final, but Beaton wasn’t fussing about it.

“The outside may be a good spot for him,” he said. “He likes                 a helmet to follow.” The pacer is Beaton’s first-ever starter in the Battle Of Waterloo. (He also has a pair of fillies advancing to the Battle Of The Belles.) “He’s done everything right so far. I think we’ll be hearing more from him this season.”

The division’s runner-up, Avion Seelster is owned and trained by Jack Darling. The Sportswriter son was an $80,000 yearling purchase and a winner in his first career start at Woodbine-Mohawk Park.

Cantstoplying was third with Louis Philippe Roy for Nick Gallucci. No Bettor Joy rounded out the top four finishers with Bob McClure for Nicky Comegna

The McNair father-son duo have won The Battle Of Waterloo on three occasions: with Magnum J in 2017; Three Of Clubs in 2013; Trail Boss in 2008.

Blake MacIntosh won the race with Sports Column in 2016.

BATTLE OF THE BELLES ELIMINATIONS

Race favourite Scarlett Hanover controlled the field from start to finish enroute to her maiden win in the first elimination division (Race 4). With Ed Hensley in the bike, the pair clocked the mile in 1:55.3.

Leaving from post eight in the second division (Race 7), Andra Day seized control of the field by the three-quarter marker to record her third consecutive win for trainer Dr. Ian Moore.

Piloted by Doug McNair, the Shadow Play filly was two lengths the best in 1:55. She’s owned by Let It Ride Stables and Bottom Line Racing.

City By The Bay (#6) was positioned as the runner-up, but made a break in the stretch. Sports Check snapped up the spot with Louis Philippe Roy for trainer Blake MacIntosh and owners Frugal Not Cheap Stable and Daniel Plouffe.\

Gregg and Doug McNair won last year’s edition of the Battle Of The Belles with Karma Seelster. In 2013, they won this race (with Lady Shadow) and the Battle Of Waterloo (with Three Of Clubs).

Anthony Beaton, who finished third in the 2018 edition of the race, drew both of the inside posts. “Hopefully we get away one-two!” he said.

“Ring Of Kerry is a bit hot under the collar. We’re trying to get her to relax, but she’s a work in progress. Turning The Table seems to be getting better and better each time we race her. I think the two-hole will suit her fine.”

The 10-race Industry Day card kicks off at 12:30 p.m. EST and also includes both Grassroots and Gold series divisions for three-year-old pacing fillies in the Ontario Sires Stakes.

Race programs and live streaming video in HD are available for all cards at www.grandriverraceway.com and wagering is available through www.hpibet.com.

COSA-TV (managed by the Central Ontario Standardbred Association) will present exclusive Industry Day coverage in a live two-hour special hosted on its social media platforms. The show is hosted by Greg Blanchard, Mark McKelvie and Jaimi MacDonald and will include coverage of the Battle of Waterloo and Battle Of The Belles, feature stories about the contenders and prizing opportunities for viewers.

Attendance is restricted to AGCO licensees and pre-registration is required.

Connections of the finalists in the Battle Of Waterloo and Battle Of The Belles can reach out directly with their access requirements for Industry Day by emailing bookings@grandriverraceway.com

The track kindly reminds the trainers of horses entering sophomore OSS Gold and Grassroots events that the EIPH program has not been offered at GRR this season and will not be offered on Industry Day.